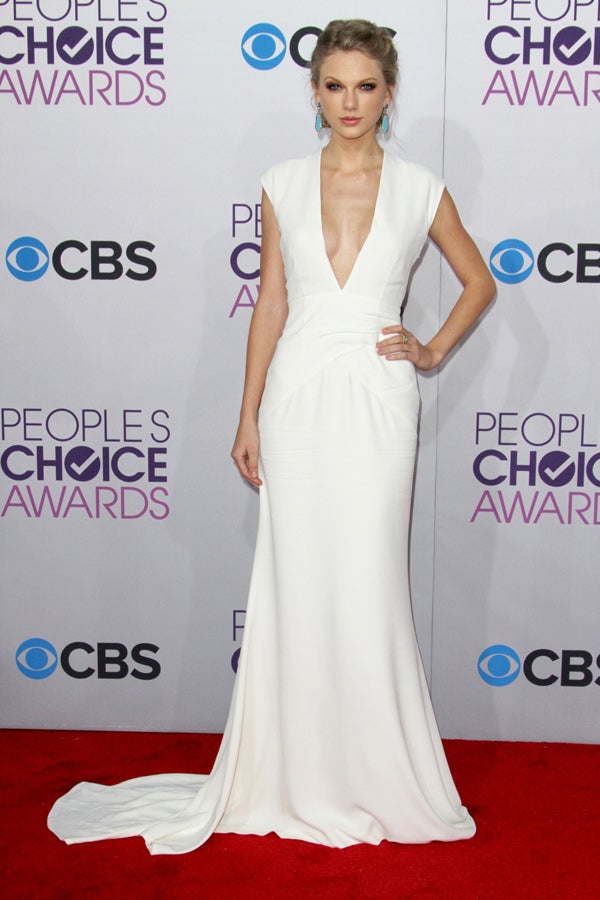 Do you remember your last breakup — the one where you stayed in sweats all day and ate nothing but Häagen-Dazs? Us, too. But the next time a romance fizzles, we're taking a page from Taylor Swift's playbook and giving ourselves a good old-fashioned breakover.

The term itself is new, but the concept is a tradition — essentially, right after a guy dumps you, you hightail it to the hair salon, slip into your sexiest duds, and throw on some confidence-boosting makeup à la Swift at the 2013 People's Choice Awards. After a very public separation with One Direction’s Harry Styles, the singer hit the red carpet in a plunging Ralph Lauren gown (check out that un-Swift like cleavage!), smokey eyes, and an elegant braided updo. She's obviously had plenty of opportunities to reinvent herself post-split (Gyllenhaal, Mayer, Kennedy), but this has to be the most drastic change for the crooner yet!

We don't know what will bruise Styles' ego more — the fact that he said sayonara to the sultry new Tay, or the soon-to-be chart-topping hit about their breakup. They're so never ever (ever) getting back together!

Style
Naomi Osaka Wore A Wedding Dress From ASOS — & It’s Still Available
Last week, four-time Grand Slam singles winner Naomi Osaka took home yet another title, at the 2021 Laureus World Sports Awards where she was named Sportsw
by Eliza Huber
Style
Michelle Obama Knit Halter Tops For Malia and Sasha During Lockdown
For everyone who took up knitting during the pandemic, only to be mocked by their close ones — think: wisecracks about Meredith Grey celibacy knitting an
by Eliza Huber
Style
Sophie Turner’s Oversized Blazer-Heels Look Hits On Two Of ...
For her first Mother’s Day, Sophie Turner, who gave birth to her daughter Willa in July, celebrated on both Saturday and Sunday this weekend. On the eve
by Eliza Huber
Advertisement
Style
J.Lo Just Wore The Robe Version Of The Jungle Print Dress
On Mother’s Day, Jennifer Lopez reminded her daughter just how cool a mom she is by reinventing one of fashion’s most iconic outfits: the Versace j
by Eliza Huber
Style
Kate Middleton Rewore Her Engagement Blouse More Than A Decade Later
A week after the Duke and Duchess of Cambridge celebrated their 10-year anniversary with a handful of family activities — during which Kate Middleton mad
by Eliza Huber
Style
Ashley Graham’s Latest Look Is A Lesson In Gym-To-Lunch Sty...
After a year of exercising at home, we’re faced with a dilemma we haven’t dealt with in some time: what to wear post-workout when you don’t have time
by Eliza Huber
Style
Hollywood Reporter Names Law Roach 2021’s “Most Powerful” ...
The only person capable of outshining both Zendaya and Anya Taylor-Joy in the fashion department is the Image Architect behind their looks, Law Roach. And
by Eliza Huber
Style
Tallulah Willis’ Engagement Ring Proves That This Trend Isn...
On Tuesday, Tallulah Willis and Dillon Buss announced that they are getting hitched. Willis, the youngest daughter of Bruce Willis and Demi Moore and the f
by Eliza Huber
Style
Katie Holmes Wore A Knit Dress With Spring’s Biggest Shoe Trend
On Monday, Katie Holmes was spotted running (literally) through New York City while filming a scene for her upcoming movie, The Watergate Girl. While the o
by Eliza Huber
Style
Let Tracee Ellis Ross’ Bikini Pic Inspire Your Own Vaxacation
Jabbed and jonesing to gtfo? Tracee Ellis Ross’ most recent Instagram post will have you looking at your neglected suitcases through misty eyes. This wee
by Eliza Huber
Style
Sophie Turner Finally Gave Us A Good Look At Her Las Vegas Weddin...
Two years ago, Joe Jonas and Sophie Turner surprised the world by ditching the Billboard Music Awards early to get hitched in a Las Vegas wedding chapel. G
by Eliza Huber
Style
Not Even Justin Bieber Can Convince Victoria Beckham To Wear Crocs
This week, a special package from Justin Bieber arrived on Victoria Beckham’s doorstep. Inside, was a pair of lilac clogs from the recent collaboration b
by Eliza Huber
Advertisement
Advertisement
Discover
R29 Stories & News
Watch
R29 Original Series & Films
Shop
R29's Most Wanted