Skip navigation!
Story from Makeup
There was more than a little controversy when word got out that Zoe Saldana would be playing the starring role in the upcoming Nina Simone biopic, mostly due to the fact that she bears little resemblance to the iconic singer. Many critics said Saldana was too light-skinned to play Simone, to the point that a petition was put forward urging her to step down. While we understand that Hollywood has a tendency to homogenize characters to fit a specific mold of what's "beautiful," we think Saldana definitely has the acting chops to pull it off with a bit of help from the movie's makeup department. Now, even the harshest doubters may be assuaged when they see this photo of Saldana in full makeup and costume — prosthetics included.
Advertisement
She's completely unrecognizable, and while we can't quite tell from the photos whether they've managed to completely transform her into Nina, any concerns that she's too much of a modern Hollywood personality to pull off the role are definitely vanquished. We could've easily mistaken her for just a normal woman walking around in her bathrobe!
What do you think of this controversial hire? Can Saldana pull off this intense role? (Us Weekly) 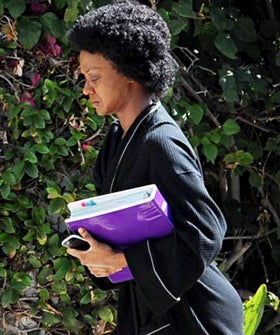 Image via Us Weekly.