Skip navigation!
Story from New York
Morning sickness, late night cravings, talks of "settling down," yep, looks like Snooki might have a sky-high poof in the oven. She's reportedly been buzzing to "insiders," who have in turn been buzzing to Star magazine (so let's take that with a grain of salt) about the baby-to-be. The father is supposedly none other than Jioni LaValle, Snooks on-again, off-again boyfriend who gets mad at the tiny reality star when she dances on tables and lifts up her skirt. We're assuming her bad-girl behavior would stop if the rumored future mommy actually became a mommy, but we still pity Jioni as we think of having to put up with both a crying infant and Snooki's signature, "wahhhhhh." (Daily Mail) 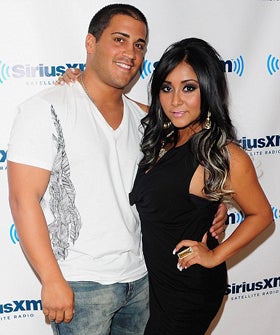