Skip navigation!
Story from Shopping
Throwback sneakers are having a moment. Or, to be more accurate, they’ve been having a nonstop moment ever since they’ve been introduced in the yester-decades. We’re talking about the kicks you (and your parents) grew up with — the inimitable Vans Sk8-Hi, Converse Chuck Taylor All Star, Puma Suede, and Adidas Superstar — and the staying power of these classic styles still place them on top of the shoe game after all these decades. And it’s crazy to think that this legacy footwear continues to burn hot rubber tracks in modern-day 2015 with fresh new updates and style iterations at every turn. So ahead, we’re paying our tribute to these beloved shoe styles and going back in time to get their humble origin stories — and peeping some of the current colorways we can’t wait to sport this summer. Cheers to these new classics, and here’s to many more years.
Advertisement
Photo Courtesy of Vans
Shop This 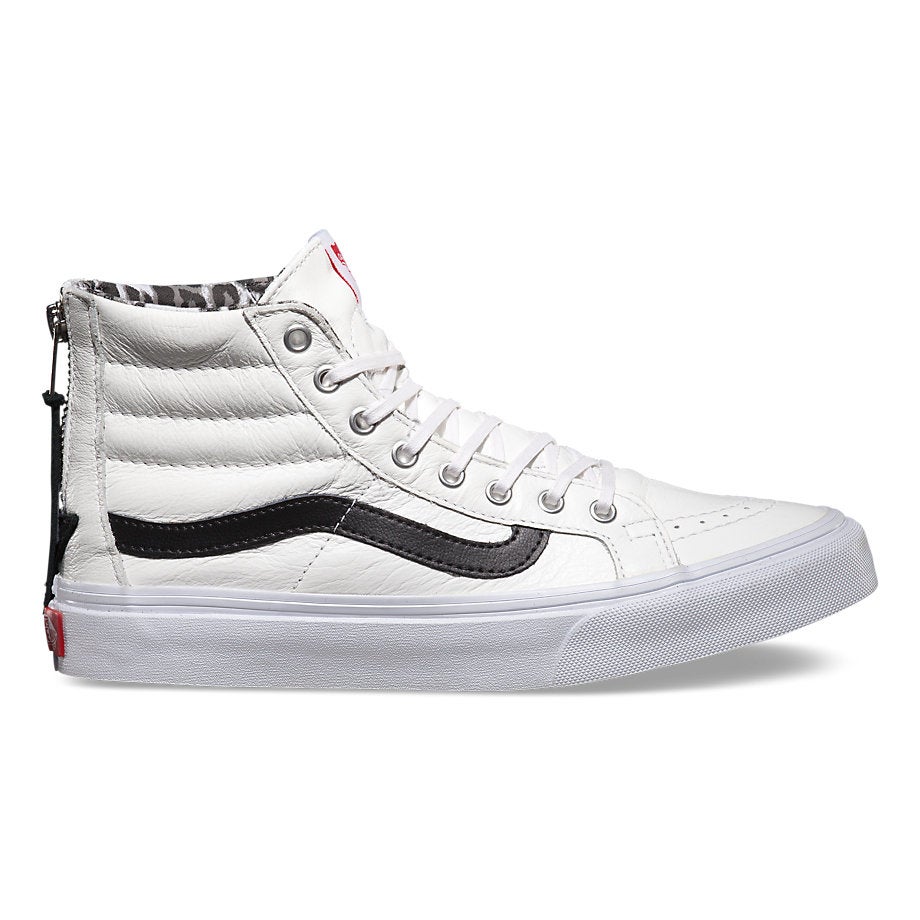 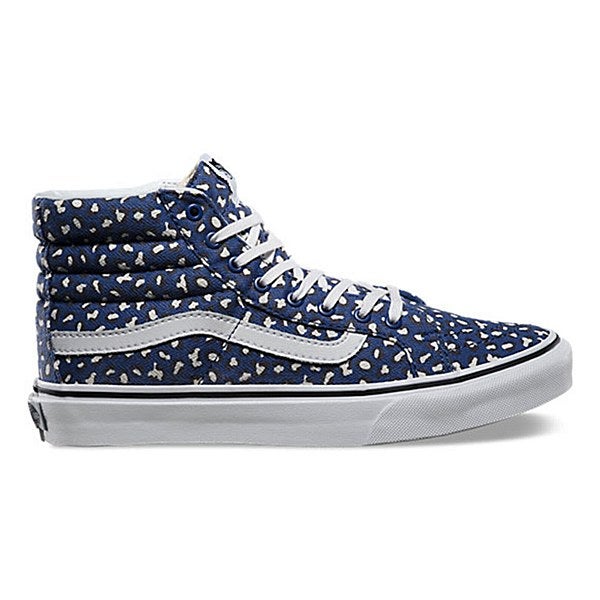 Vans
Sk8 Hi Slim Shoe Womens - Herringbone Leopard
$79.99
Vans Sk8-Hi
It’s hard to talk about Vans without giving nod to its huge influence on L.A. skate culture in the late ’70s. “A lot of this had do with a small group of skateboarders in the Santa Monica/Venice Beach area who adopted Vans as their skate uniform,” says Rian Pozzebon, head of design at Vans. “Their unique style at the skateboard contest turned the skate culture upside down — they became famous around the world, and Vans with it.” It was this shift in culture that inspired Vans to work directly with skateboarders, getting their input in designing skater shoes that would give them better support. “The Sk8-Hi was one of the shoes, designed in 1978,” says Pozzebon. “It was designed by Steve Van Doren [the son of Vans founder Paul Van Doren] along with skateboarders and George Greenwood, a pattern maker for Vans. Back in day, all the early Vans were designed by pattern makers.” The Sk8-Hi was initially successful with skaters, but it truly hit iconic status in the mid-’80s when the rising skate culture collided with the hardcore punk movement that simultaneously came out of L.A.'s South Bay. The shoe, with its padded hi-top and easy wave on the side, has evolved a great deal since the late ’70s/early ’80s. “We have a Sk8-Hi Zip, which has a zipper down the heel, a slimmer version of the shoe made specifically for women called the Sk8-Hi Slim, and a deconstructed version with all the padding and layers removed called the Sk8-Hi Decon,” says Pozzebon. “There are also a couple other version that I am excited about, but you'll have to stay tuned for those.” We suppose these will do. For now.
Advertisement
Photo Courtesy of Puma
Shop This 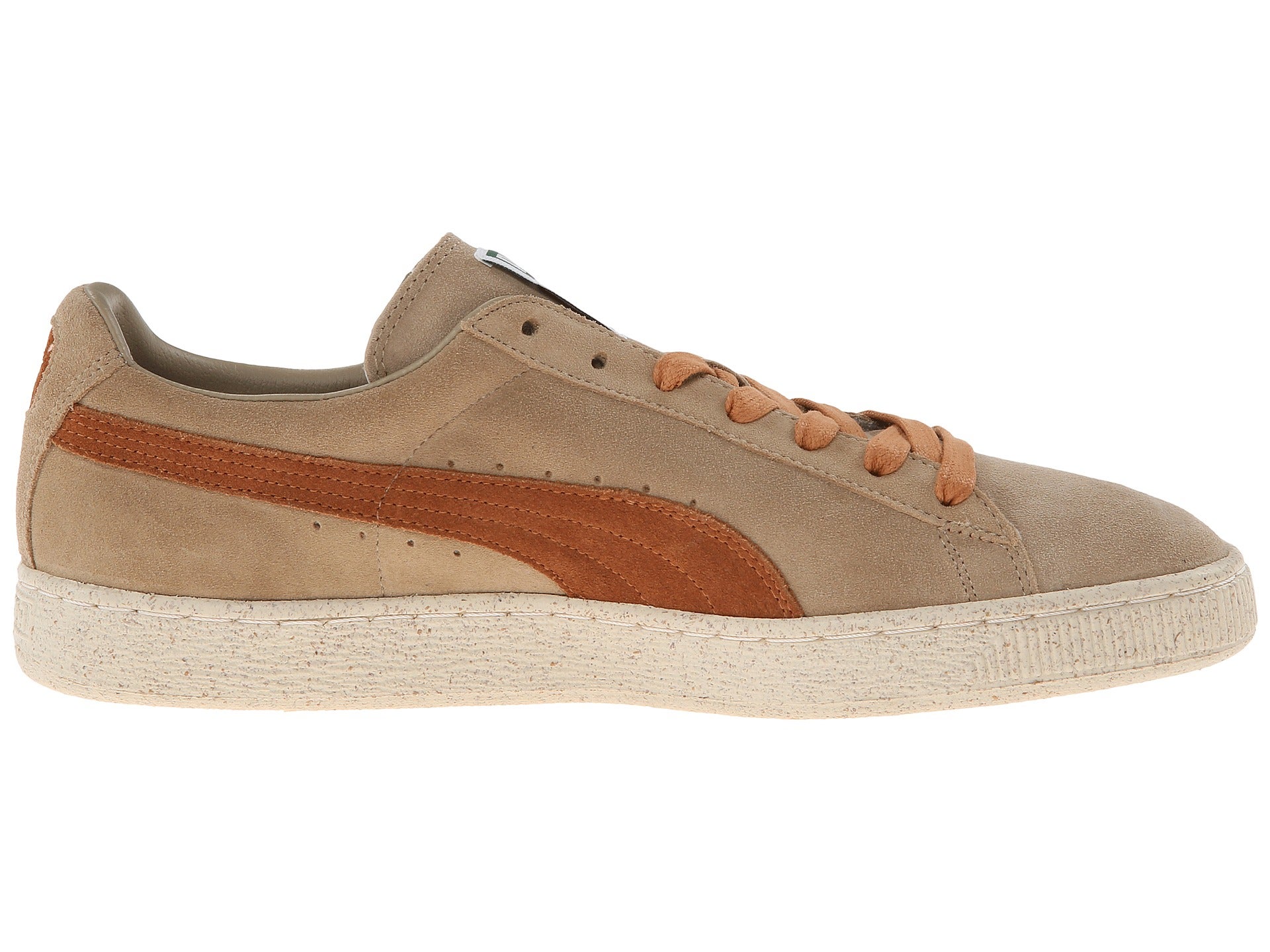 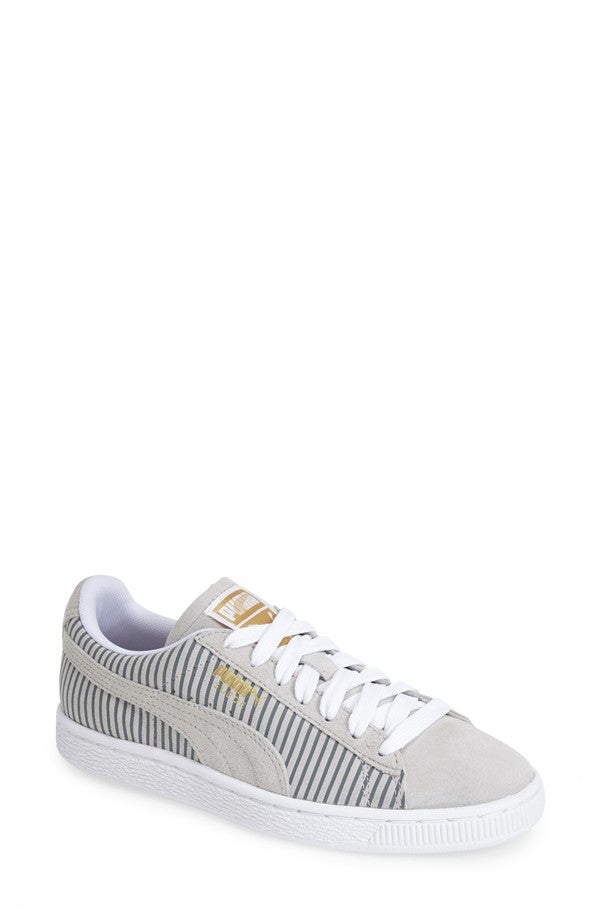 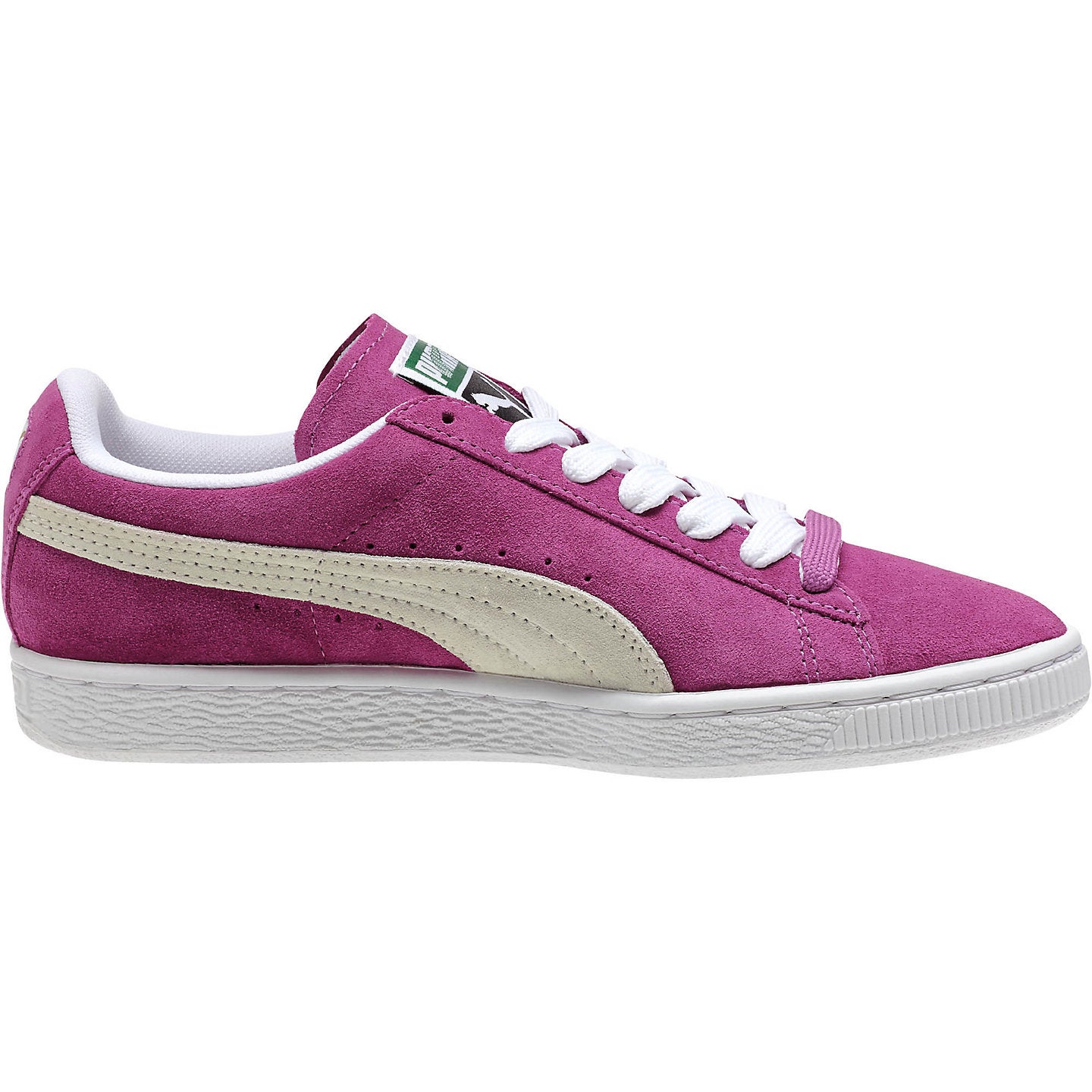 PUMA
Suede Classic Wn's
$59.00
Puma Suede
The high-quality supple suede, that white Puma swoop, the easygoing silhouette — you can’t walk around any city without spotting this unisex shoe at least once. Though it’s now deeply rooted in street culture, the Suede’s history actually begins in the world of professional sports. In the 2013 book Stories of the Puma Suede (published by Acclaim magazine and commemorating the 45th anniversary of the Suede), Puma’s global director for brand marketing Adam Petrick said, “The Puma Suede’s introduction to the world took place during the 1968 Summer Olympic Games [the same year the Suede was born] when a young athlete named Tommie Smith claimed gold in the 200m sprint.” Smith wore his Suedes on the podium moments following his epic gold win, which had curious viewers turning their attention to Smith’s feet. “The path to international recognition continued with basketball legend Walt ‘Clyde’ Frazier, requesting a customized version of the Suede that would suit his on-court performance as well as his suave, street-savvy off-court style, making way for the style that’s now known as the Puma Clyde.” From there, the Suede quickly rose in popularity on the streets; basketball kids, hip-hop B-boys, and skateboarders all started to rock these versatile sporty-meets-lifestyle kicks. And they still do today. “In recent years, we have experimented with different graphic elements — patterns, embossing and de-bossing, hand painting, and a variety of other application techniques that bring a lot of additional visual interest to the shoe,” says Petrick. “We've played with just about every option of color blocking you can imagine. The relatively low number of pieces that make up the upper of the shoe means that a color designer can have a lot of fun with unique and different combinations.” And it doesn’t stop there: The very manufacturing process has evolved with the times as well. “We've looked into manufacturing the shoe to make it more sustainable and ecologically efficient,” he says. “We've played with adding more modern technical cushioning elements to the outsole.” Still, Petrick has a soft spot for the original. “The best look, in my opinion, remains the classic two-color combo.” We have to agree — here are some of our favorite Suedes.
Advertisement
Photo Courtesy of Wikipedia
Converse Chuck Taylor All Star
We’re betting that if you owned one pair of iconic sneakers, it was likely the Converse Chuck Taylor All Star. This affordable shoe with the trusty rubber sole and canvas upper is rather ancient at this point — the All Star dates all the way back to 1917, in fact. But, the sneaker didn’t hit its prime until the 1920s when basketball player Chuck Taylor was selected by the company to be a Converse salesman and spokesman in 1921. He did such an amazing job that by time the ’60s rolled around, the shoe was worn by virtually every basketball player in the country. “It became the Chuck Taylor All Star in 1934,” says Sam Smallidge, Converse archivist, of the official name change. “Throughout time, the Chuck Taylor All Star has become one of the world’s most legendary sneakers, with fans adopting the sneaker as a badge of creativity and self-expression.” Chucks or Cons, which they are often affectionately nicknamed, have made their way from sportswear to streetwear with ease, particularly with the rise of the punk-rock movement in the ’70s when many underground musicians, such as the Ramones, wore the shoe. Surprisingly, the Chuck Taylor All Star has remained very consistent and relatively unchanged over the decades — major moments included the introduction of low tops in 1957 and the debut of color All Stars in 1971. So, how does an iconic shoe evolve when there’s not much to do? “Converse has approached evolving the design in an interesting way. Instead of simply reissuing All Stars from particular eras, we take ideas from the past and combine them with modern design and materials to create something new,” says Smallidge. “The Chuck ’70 is a great example of this, since it takes comfort features only found in the 1970s and combines that with modern construction and design.” With its simple assembly and parts, the Chuck Taylor All Star “has also been a great silhouette for collaborations, like the recent Comme de Garcons and Andy Warhol sneakers,” he adds.
Photo Courtesy of Adidas
Shop This 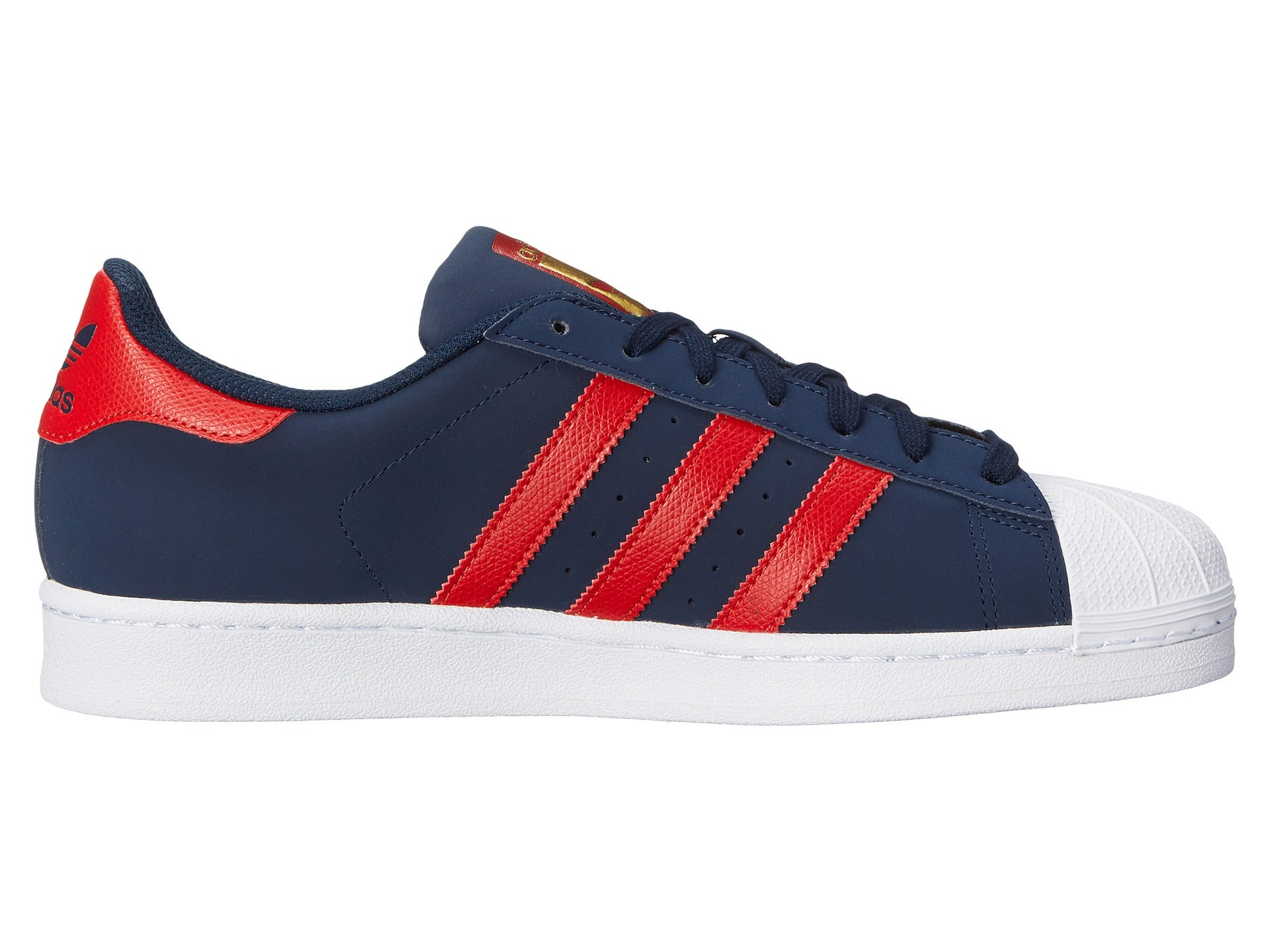 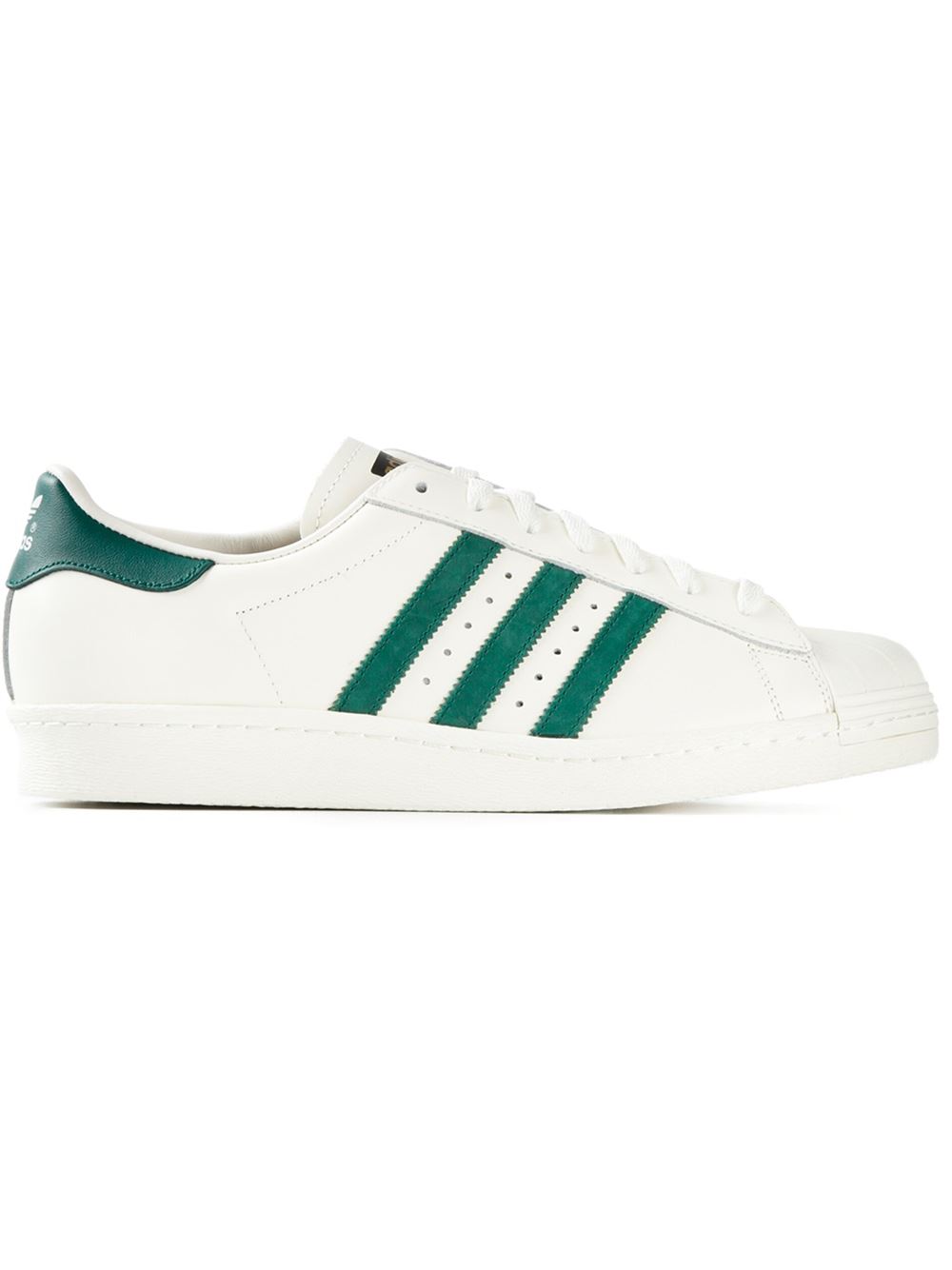 Adidas
'superstar' Sneakers
$81.11
Adidas Superstar
The Adidas Superstar, with its shell toe and trademark stripes, is now considered a streetwear staple, but its origins actually owe themselves to sports. “The Superstar was originally designed as a basketball shoe,” says Sam Handy, senior design director of Adidas Originals. “At that time [when it was released, in 1969], the shoe was worn by most players on the courts and became easily identifiable, given the shoe's unique shell-toe detail.” And it was that design and protective details such as the toe cap, the extra padding around the achilles area, and the thick, rubbery sole that made the Superstar a huge sensation on the courts during the mid-1970s (in fact, there was a time when 75% of all pro basketball players were sporting the Superstar). Eventually, though, basketball footwear evolved and the Superstar made its way into a new subculture. The shoe became widely popularized off the courts in the ‘80s when it was embraced by B-boys and became a prominent fixture in the street and hip-hop scene — it was even shouted out by Run-D.M.C. on their Raising Hell album when the group paid homage to the shoe in “My Adidas.” From basketball players, to B-boys, to the fashion girls of today, the Superstar has turned into a bona fide sneaker essential. With so many design options, selecting a Superstar has never been easier (or more difficult, depending how you look at it). “The Superstar has evolved and adapted through different fabrications, colors, and through the creative lens of our collaborators,” says Handy. It’s true — just look around the marketplace and you’ll see the unisex Superstar is now offered in almost every type of colorway. In addition, notable celebrities and brands — from Pharrell, to Topshop, to Rita Ora, and countless others — have left their mark on the Superstar’s history with their own limited-edition releases. And there’s still more to come for the shoe with the unmistakable silhouette: “The Superstar will continue on its journey as long as street style changes and adapts to creative inspirations of street culture,” says Handy. Which means the Superstar is here to stay for a long, long time.
Advertisement
Designer Collaborations
The Lunar New Year Is Fashion’s Favorite Holiday
by Eliza Huber
Shopping
Amazon’s Got Your Arms and Legs Covered (With Affordable, Winter-...
by Emily Ruane
Fashion
Red Hot Lingerie To Buy Just In Time For Valentine’s Day
by Eliza Huber
Shopping
Found: Amazon’s Top 5 Deals Of The Day
Today isn’t Prime Day, Black Friday, Cyber Monday, Boxing Day, or a long-weekend holiday — but, even without any special occasion, Amazon is still
by Elizabeth Buxton
Shopping
Layer Up For A Song With These Marked-Down Winter Coats
by Emily Ruane
Shopping
Anthropologie Just Dropped A 24-Hour Flash Sale
by Elizabeth Buxton
Best Wedding Dresses
Say Yes To Matches Fashion’s Wedding Edit
by Eliza Huber
Shopping
12 Of The Best Weatherproof Snow Boots On The World Wide Web
by Emily Ruane
Shopping
We Spent Way Too Many Hours On Amazon Digging Up These 45 Fashion...
by Eliza Huber
Sales
Urban Outfitters Has Extended Its Half-Off Sale On Sale For Today...
by Karina Hoshikawa
Shopping
31 Gorgeous Wedding Dress Options For Under $1,000
by Alyssa Coscarelli
Best New Fashion Designers
This Grandma-Inspired Knitwear Is About To Be Everywhere
by Eliza Huber
Discover
R29 Stories & News
Watch
R29 Original Series & Films
Shop
R29's Most Wanted