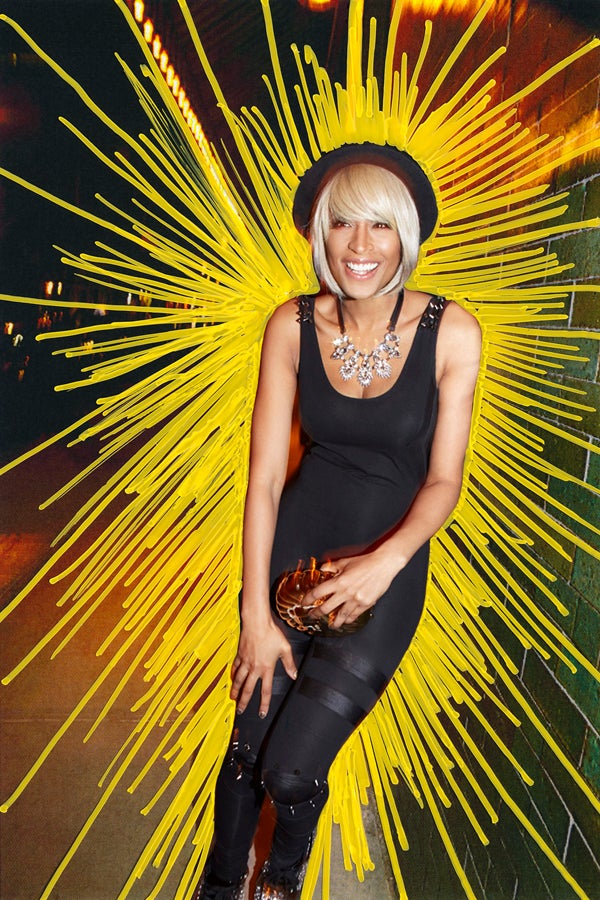 Sandflower, Musician and Fashion Designer
If anyone was ever a pure-blooded creature of the night, it's the 24-year-old, Brooklyn-raised singer, designer, artist, and all-around wild child known simply as Sandflower (her real name, BTW). Between blistering sets and endless after-parties, we've seen her rock racks upon racks of outré, often contrasting looks (sometimes in the same night!). Riding all the goodwill that her first single, "Rock It To The Moon," built up last year, Sandflower is gearing up to drop her debut album, working on her first clothing line, and generally running amuck on the streets of our fair city. Luckily, she took a break from it all to chat with us about her (very) early nightlife experiences, Debbie Harry, hotdogs, and vintage fanny packs.
Advertisement
Tell us a bit about your personal New York nightlife history.
“I’ve been staying out way too late since I can first remember. My mom is a rock singer and I spent a lot of late nights as a little kid watching her onstage here in NYC. Like, I was playing with Barbie dolls during soundcheck with the band at clubs like CBGB’s or Knitting Factory, then going to school in the morning. I’m so happy for all the times she couldn’t get a babysitter!”
So, as a certified vet, what’s your favorite thing about it?
“I love the late-night feeling of NYC when anything can happen. All of a sudden, you’re talking to Debbie Harry about dogs, or smooshed up against Mykki Blanco after his show at the Bowery Ballroom talking about music. It’s like walking on a tight-rope — at any minute things can sort of go left but that’s what is so exciting. It fuels my music, for sure.”
We love your style. How do you put together your outfits?
“I believe that every item of clothing adds up to your personal story. Some days I want to rock a Chromat exoskeleton under a gold Mylar jacket by BCALLA. Some days, I want to wear my grandmother’s vintage sweater with a pair of Louboutins.”
But we see you in a lot of original stuff, too, right?
“I’ve always modified and made my own clothes and accessories. It’s a cool way for me to stay inspired between writing songs and performing. Besides the studio, my second home is totally the Garment District. Fabrics, trim, and all that stuff just make me so happy. People have always approached me about the clothing I’ve made or modified and my friend, the singer/songwriter Poly A, really pushed me to take it more seriously. So, I’ve started my own line called Hello Yesss.”
Advertisement
Any style advice for late-night adventurers?
“Be a style shape-shifter. Pack the right accessories, so you can change up your look at any moment. I always want to evolve even as the night goes on — it keeps everything exciting. I’ve always got rings and random things in my favorite gold backpack that DBD and Ace over at the Sprayground gave to me. It’s also fun to have a secret character in your head that inspires your outfit that night. Some nights, I decide a theme for myself.”
Themes? Like what?
“The other night I was channeling old-lady-at-a-casino chic. And, yes, I rocked a vintage fanny pack.”
Wow. Respect.

Party Dresses
15 Sequin Dresses To Sparkle In This New Year’s Eve
by Vanessa Golembewski
29Rooms
29Rooms Is Back; Here’s How To Attend Safely
Over the past year and a half, we’ve missed many opportunities to attend concerts, festivals, parties, and hangs. And although restrictions have loosened
by R29 Brand Experie...
Somos Latinx
Dear Miya Ponsetto, You Can Be Latinx & Still Be A Karen
Miya Ponsetto, the white woman dubbed as “SoHo Karen” on social media, was forcibly arrested in California yesterday. Her arrest comes after sh
by Jasely Molina
Advertisement
Food & Drinks
Is A Bagel Really A Bagel If It Isn’t In NYC?
by Elizabeth Buxton
New York
We Dig This NYC Dim Sum
by Camille Coklow
Beauty
The 17 Most Epic NYC Massages
by Kayla Jacobs
Movies
11 Movies Perfect For A Glorious Snow Day
by Vanessa Golembewski
New York
You HAVE To Try The Avocado Toast At These NYC Restaurants
by Elizabeth Buxton
New York
The Absolute Best Spots To Slurp Ramen In NYC
by Zoe Bain
New York
The NYC Rooftops You Need To Hit This Summer
by Elizabeth Buxton
Beauty
The Best Cheap Haircuts In New York City
Choppa style, for cheap.
by Liesa Goins
New York
The Indie Bride-To-Be’s Guide To Dress Shopping In NYC
by Ashley Castanos
Advertisement
Advertisement
Discover
R29 Stories & News
Watch
R29 Original Series & Films
Shop
R29's Most Wanted