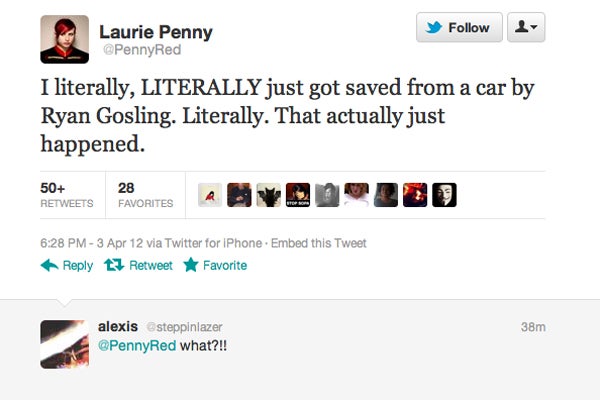 Sure, journalist Laurie Penny almost got hit by a cab, but
Ryan Gosling
actually touched her! Well, okay, he shoved her out of the way of danger, but still... Laurie Penny (or Lucky Penny, as we'll now call her) tweeted last night that she began to cross the road while looking the other way (yep, she's a Brit), and the heroic hunk saved her from danger. "Lucky bitch," the lady next to her mumbled, confirming RyGos' identity. Laurie Penny may call this the the luckiest day of her life, but for this Hollywood hero, it's just another Tuesday. Remember when he broke up a fight? Bruce Wayne, meet your match.

Weigh in here: Would you see your life flash before your eyes if it meant getting saved by Ryan Gosling?