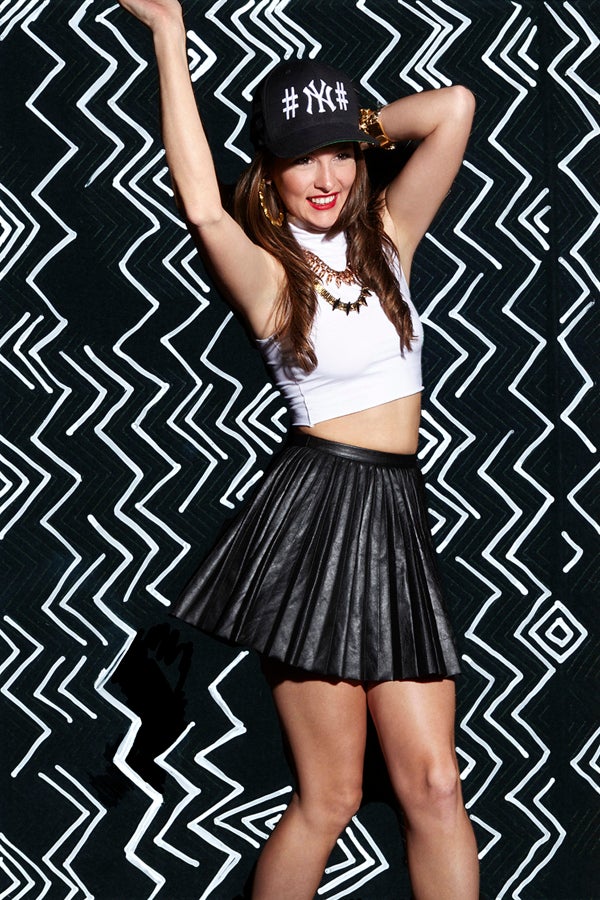 Ruth Gruca, Creative Director, OKFocus
After a full 30 days of talented, hardworking Party Girls, it's perhaps only proper that we round out the month with Ms. Ruth Gruca. It's not that this Charleston-born expert in tech, art, branding, and fashion is out all night every night or eternally making a scene on top of a banquette somewhere. It's that Gruca's key asset — besides her ability to fuse the best of the creative and the technical — is her near-boundless, high-octane energy. Whether she's dancing, guest starring in a VFILES video, doing creative direction for a Fortune 500 company, or simply styling a friends lookbook, she makes just about anything a little bit more of a party. And, with such varied career, that means a lot of parties in a lot of different professional spaces. Read on to get just a taste of this one-of-a-kind New Yorker.
Advertisement
Now, you’ve done a lot — and we mean a lot — of really different things. You’ve managed an indie tech boutique, styled and starred in a canine fashion editorial (good job on that, BTW), and done styling for Nike. Thing is, we’ve never actually figured out your background.
"Yeah — ha — I really do get around. Now, to start off, I was born and raised in Charleston, SC — I'm a Southern belle. I left to attend the School of the Art Institute of Chicago, where I majored in art and tech. I did everything from Arduino programming to sound installations to building my own eight-step sequencer.”
Interesting. So, when did you actually first fall in love with tech?
"I spent a lot of time on the Internet. When I was younger, I would chat with boys on AIM (prbm), obsess over my Myspace page, and I would also mess around in GarageBand with my brother, which actually led to me forming a pre-witch-house, industrial-noise band. That didn't last long, but I did get to open for one of my favorite electronic groups, Gatekeeper."
And after college?
“Well, once I graduated I took that research a little further and moved to Mali, Africa. I lived in Dogon country and studied 'magic' for a few months.”
Magic? Like, magic magic?
“The majority of people living in Dogon practice an animist religion, others practice Islam, and a few believe in Christianity. I was mostly interested in the people who believe in the animist sect, spending most of my time traveling from village to village interviewing and meeting with their leaders. I would watch and sometimes even participate in their many rituals, including fire eating and animal sacrifice."
Advertisement
So, actually, how did you go from studying animism in Mali to being the multimedia New Yorker you are?
“After Mali, I ended up traveling around and moved to New York completely on a whim. I originally started working for Dijital Fix because of my tech background, obviously. I helped grow the company and now we have a location in Brooklyn, San Francisco, and a pop-up in LA. But, I’ve always been driven toward art and people seem to notice me for my unique style. When I put an outfit together I like to think of texture first, other then what brand it is or who designed it. I've been known to rock anything from clear plastic pants to a motorcross vest in the club. I started to do some styling and different art-directing jobs, and that got me involved in a lot of cool projects."
Such as…
“Well, I did a video with Karley 'Slutever’ Sciortino and Alan Del Rio Ortiz for her Purple Television series. I really respect her work. She really knows what’s up. I’ve done some styling and art directing for Nike. I’ve modeled. I am a professional nodel (‘model not model’), music video girl (check Mykki Blanco or LE1F's videos), starred in VFILES Model Files, and whatnot. Oh, and that DIS dog shoot, I produced, styled, and modeled in it. We even did a doggy casting and chose a bunch of different dogs from a bunch of different people. We interviewed the dogs!"
Advertisement
What kind of questions do you ask a dog?
"We asked them what their personal style was like, what they wanted to be when they were older."
Fair enough.
"Right now, I'm still consulting for Dijital Fix, but mainly I work for OKFocus' art team and I do accounts management. We design and cultivate ideas online. Use technology in culturally relevant ways for companies like Google and Nike. Check out some of our sites like Overlayer o Lemetweetthatforyou."
Now, you’ve also told us you’ve been handcuffed to Snoop Dogg, done shots with Jersey Shore kids, twerked on stage with Three 6 Mafia, and been branded on stage. How do you get into all those situations?
“I feel like it’s all about living in New York and meeting different people. Literally, all of those have just come up from meeting different people, being out and about, and having an open mind. I don’t really ever say, ‘no.’ I kind of just go with it. You only have one life to live, so you might as well go for it."
Styled by Lauren Edelstein; Hair and Makeup by Bethany Brill
Advertisement