Skip navigation!
Story from Los Angeles
It's unlikely anyone has forgotten (nor should they) the night, three years ago, when Rihanna was brutally beaten by then-boyfriend Chris Brown, after the Grammys — he plead guilty to felony assault. Well here's another one for the shock-and-awe history books: Even though the two are now purportedly "just friends" (bet your jaws are already on the floor), the two are now releasing a duet, set to drop next week. The song will be a full version of the interlude "Birthday Cake" from RiRi's recent album, Talk That Talk.
We're seeing so much red right now, we feel woozy. WHAT is this nonsense all about? We understand that the recording world is tight-knit, and remember when RiRi respectfully said she'd "never wish anything horrible for him" — but this feels like too much. And it makes us uncomfortable. Is this a publicity stunt? That feels callous. Is it a rekindling? That feels frightening. Either way, we have nothing but the utmost of sympathy for the singer because things are obviously awry.
Advertisement
We're certainly unsure about what's happening here, and about what kind of message she's sending to her fans, so instead, we'll choose to focus on the strong, thoughtful message Rihanna shared with Glamour a little over two years ago:
"Domestic violence is a big secret. No kid goes around and lets people know their parents fight. Teenage girls can’t tell their parents that their boyfriend beat them up. You don’t dare let your neighbor know that you fight. It’s one of the things we [women] will hide, because it’s embarrassing. My story was broadcast all over the world for people to see, and they have followed every step of my recovery. The positive thing that has come out of my situation is that people can learn from that. I want to give as much insight as I can to young women, because I feel like I represent a voice that really isn’t heard. Now I can help speak for those women."

But you tell us. Are we overreacting? Or does this make you just as uncomfortable as it does us? 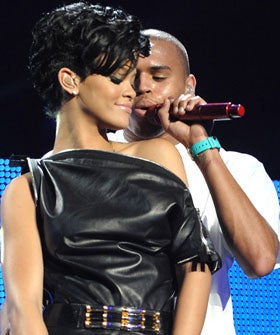