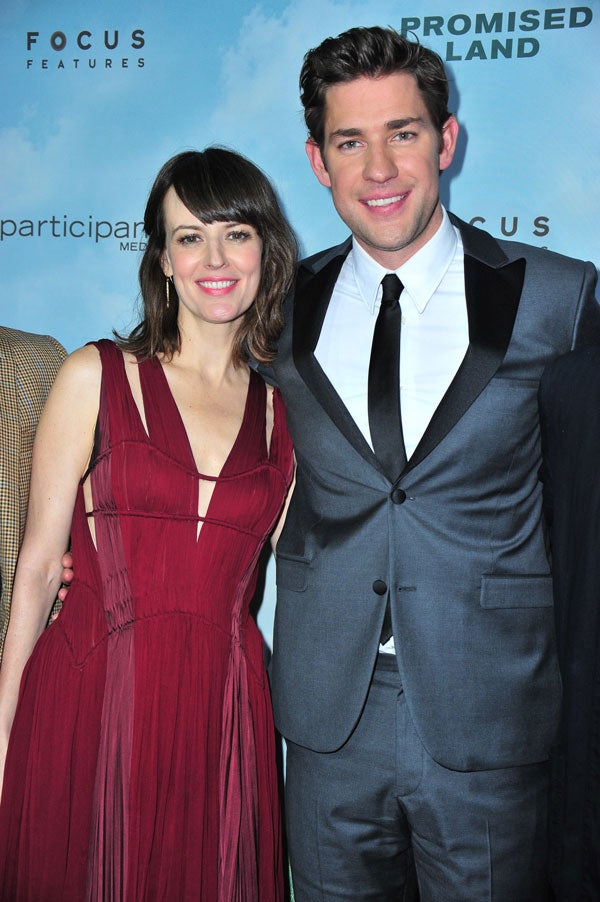 Aside from starring in one of the most beloved sitcoms of the last decade, The Office's John Krasinski is making a name for himself as a writer and environmental activist. His just-released new film, Promised Land, is co-written and co-stars Matt Damon alongside Rosemarie DeWitt, and dives headfirst into the controversial natural gas-extraction process of fracking. The movie also reteams Matt Damon with Good Will Hunting director Gus Van Sant, a filmmaker who is, himself, no stranger to controversy. Together the team has filmed a sobering insight into the effects of big oil on small- town America, as well as a dramatic romance between Damon, Krasinski, and DeWitt. We caught up with DeWitt and Krasinski for a short chat about the film at the recent premiere in NYC.
Advertisement

How did the idea come about for the film?

Krasinski: I had the idea about two years ago, and I wanted to tell a story about community, and fracking is a high-stakes issue where there's a lot to gain and a lot to lose. So that's the idea that I brought to Matt, and we started writing right away.

Rosemarie, can you tell me a little bit about the character you play in the film?

DeWitt: I play Alice, she's a school teacher from the small town where Matt Damon comes in to drill for natural gas. Then John Krasinski comes in, and there's a bit of love triangle between the three of them.

John, how did you end up working with Matt?

Krasinski: I met Matt during Adjustment Bureau, which he worked on with my wife. We went on some double dates and we got to know each other really well.

And who are you guys wearing tonight?