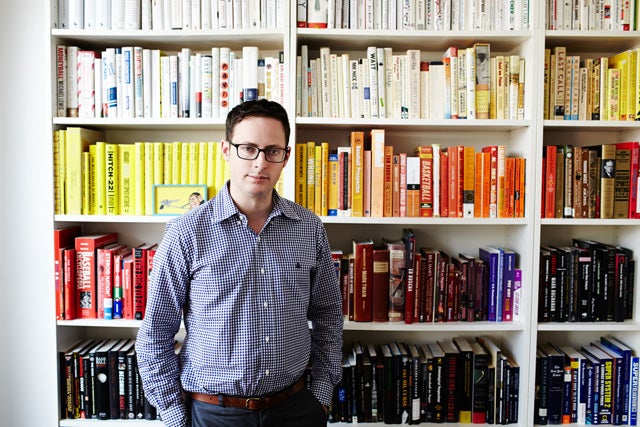 Photographed by Winnie Au
Nate Silver, the man who called the '08 presidential election in 49 out of 50 states, and the '12 election in all 50 states, is in fact, not psychic. He's just right more often than everyone else (up until recently, at the New York Times — and now, at ESPN). He chalks it up to the fact that everyone else is far too distracted by the bullshit — and maybe a little arrogant, too. "People are much too sure of themselves. From decisions to go to war in different countries and market failures to catastrophic weather events and earthquakes. People overestimate how sure they are about what's going to occur and then learn the hard way [that they don't]."
Advertisement
He boils what he does — also known as sabermetrics — down to "using data and statistics to try and uncover truth." Sounds simple enough, but like we said, he's right a lot. "We're not trying to magically predict things. We're just trying to say, look there is a lot of data in the world and we need to distill that down to clarify what we know and what we don't know — how much uncertainty there is around the problem." He attributes his success to spotting a flaw in the status quo, being unwilling to compromise, being willing to rock the boat, getting a bit lucky, and being forced to be fearless, from an early age.
In his case, he says: "I grew up, and I'm gay, and I'm kind of a nerd in a big public school. So, you either fake it or you learn to trust yourself. In some ways, having constraints or challenges like that can force people to not be lazy and not to just become boring lawyers or cookie-cutter bankers, or doctors, but to actually realize: This world has some flaws as I see it, and I can adapt to them, or I can try to modify them and try to run my own course." Run his own course he has. Taking a brand of statistics normally associated with sports (you read Moneyball, or at least watched the movie, no?), he revolutionized the political-polling-and-analysis game. And now, he's marrying that political skill with his first love, bringing his blog, FiveThirtyEight.com, over to ESPN, while taking on a contributor role at ABC News. Sounds like a dream gig — maybe even more exciting than that time he met the president....
Advertisement 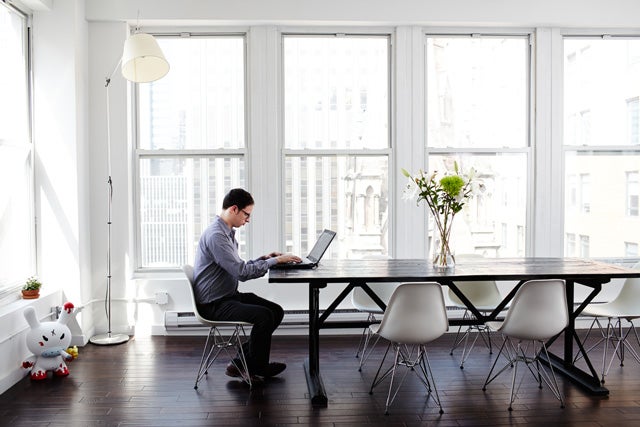 The Dual Meanings Of "Visionary"

"I always think a visionary is someone who is skilled at perceiving the truth, basically. That's one definition. Another is someone who becomes a paradigmatic case for how things are done. You can say after the fact that they were a visionary because everyone copied them. If you look at cell phones, while Samsung is a nice phone, it's basically ripping off the iPhone. I think the visionary is by definition the first to market, or among the first to market — that, as opposed to the most successful entrepreneur."

"The thing I'm most personally proud of professionally is probably finishing my book — because a book is a really hard thing to do. We're so used to instant gratification and the book took three and a half years. But, in terms of [powerful moments], you kinda get jaded. I met the president at some Christmas party event where they filter thousands of reporters and journalists through. You talk to him for three seconds, but it's still meeting the President of the United States. Those things are cool, but one thing about playing poker is that you have to learn how to even out the highs and the lows. In poker you're going to have a lot of highs and lows, and kind of die a thousand deaths and have a thousand rebirths. So, I tend not to get flustered too much by positive or negative events. It can be weird when you turn on the TV and someone's talking about you right on cable news. But, you get used to it after a while."

"Don't be lazy. Don't think that the standard bullshit is acceptable. The worst advice people give, I think, is the idea that you have to know exactly what you want to do when you're 21 years old. You have to get around and feel things. At the same time, I think that people have to apply themselves and work hard. I think there's more useless advice than bad advice out there. Like, 'find your inner calling.' Well, okay, how do you do that?"

You've Got To Compete If You Want To Win

"You have to be competitive. But, it depends on what level of success you're talking about. If you're talking about the people that we'll remember a generation later, I think you almost always have to be competitive. Or, you can have such a pure vision, where you're just such an artist that you don't really give a shit about anyone else, and that's a different place. And I see how this can be problematic for women, in part. I think of Sheryl Sandberg's book. A big thing for me is that elections are cyclical events. So, you can kind of know in advance when you're going to be busy and when you're going to be less so. This year is more relaxed, obviously, than last year was. I made a lot of sacrifices, also. It took me the last four years to get my book done and get geared up for the election. That was kind of a conscious decision that, hey now is a unique opportunity for me, and now it's really important for me to work. I'm not sure I could keep doing that my whole life, and I don't plan to. You have to have a little more balance. But the point is sometimes that balance comes not in the day to day, or in working from 9-to-5. It comes from knowing, 'I'm gonna work from now until September, and then after that I'll get to relax from September until November, and then I'll get busy again.' That's not as realistic if you have children, or plan to, so that is challenging [for women], I think."

"Look, you've never really had a candidate within her party who was that far ahead. She gets like 70 percent of the votes among democrats. It's really early for a poll, obviously. But, I think people forget that there were two really compelling democratic candidates in 2008, and one of them had to lose. That doesn't mean they're a weak candidate at all. Either Obama or Clinton could've won the nomination in almost any other year. For that matter, even the pre-scandal John Edwards would've been kind of a traditionally strong candidate. With her Secretary of State credential now, and having Obama working presumably for her instead of against her, it will be very hard to see her losing the nomination. The general election race is different obviously, though."

For more in-depth interviews with inspiring visionaries, click here.
29Rooms
29Rooms Is Back; Here’s How To Attend Safely
Over the past year and a half, we’ve missed many opportunities to attend concerts, festivals, parties, and hangs. And although restrictions have loosened
by R29 Brand Experie...
Somos Latinx
Dear Miya Ponsetto, You Can Be Latinx & Still Be A Karen
Miya Ponsetto, the white woman dubbed as “SoHo Karen” on social media, was forcibly arrested in California yesterday. Her arrest comes after sh
by Jasely Molina
Food & Drinks
Is A Bagel Really A Bagel If It Isn’t In NYC?
by Elizabeth Buxton
Advertisement
New York
We Dig This NYC Dim Sum
by Camille Coklow
Beauty
The 17 Most Epic NYC Massages
by Kayla Jacobs
Movies
11 Movies Perfect For A Glorious Snow Day
by Vanessa Golembewski
New York
You HAVE To Try The Avocado Toast At These NYC Restaurants
by Elizabeth Buxton
New York
The Absolute Best Spots To Slurp Ramen In NYC
by Zoe Bain
New York
The NYC Rooftops You Need To Hit This Summer
by Elizabeth Buxton
Beauty
The Best Cheap Haircuts In New York City
Choppa style, for cheap.
by Liesa Goins
New York
The Indie Bride-To-Be’s Guide To Dress Shopping In NYC
by Ashley Castanos
New York
Is This Really What The NYPD Thinks About Rape?
NYPD captain Peter Rose has angered rape advocates after saying “acquaintance rape” cases are not as serious as rapes committed by strangers.DN
by Shannon Carlin
Advertisement
Advertisement
Discover
R29 Stories & News
Watch
R29 Original Series & Films
Shop
R29's Most Wanted