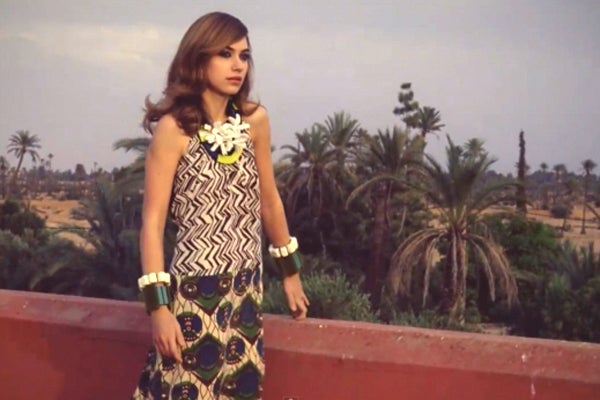 Just in case you needed yet another reason to be beside-yourself-excited for the H&M for Marni launch (debuting March 3rd!), we've got a little Friday treat for 'ya with Sofia Coppola's new H&M for Marni commercial. We first heard about the director/Swedish mega-brand collab back in December, and Coppola's first fashion film project does not disappoint.
The short was shot at a picturesque villa in Marrakech that the director had visited with friends, and has all the usual suspects of a Coppola flick: a scene-stealing up-and-coming leading lady (cue British actress Imogen Poots), gaggles of beautiful models and socialites (we spotted Annabelle Dexter Jones and Liu Wen) lounging around and getting swept up into an all-day rager, impeccably styled clothes (we'll take one of each, please) and — of course — a killer soundtrack. We don't know about you, but we're now jonesing for a Moroccan weekend jaunt, ASAP. (Fashionista)
Advertisement
Tell us what you think of the director's first foray in fashion flicks. Should she keep 'em coming or stick to features?

TV Recaps
R29 Binge Club: The Boys Season 2 Recap
This is not your daddy’s superhero show! If you watched season 1 of The Boys, Amazon’s reimagining of Garth Ennis and Darrick Robertson’s
by Rosie Knight
TV Shows
The Boys Season 2 Soundtrack Is Brought To You By The Le...
by Rachel Paige
Music
New Music To Know: Feels Brought To You By Kat Dahlia, Jessie Rey...
As if Fridays weren’t your favorite day already, Refinery29 will also be gathering the best new music out each week, and breaking down why each track des
by Ineye Komonibo
Movies
Natural Disaster Movies We're Scared Might Actually Happen In The...
by Elena Nicolaou
Climate
28 Years Later, FernGully Could Really Be The Last Rainf...
It’s time to wake up. On Global Day of Climate Action, VICE Media Group is solely telling stories about our current climate crisis. Click here to meet yo
by Anne Cohen
Pop Culture
Demi Lovato & Max Ehrich Have Ended Their Engagement
After a brief engagement, Demi Lovato and Max Ehrich have split. PEOPLE first reported that the couple has made the “difficult decision” to end
by Morgan Baila
Movies
Where To Watch The Addams Family This October
In 1938, The Addams Family began as an illustrated cartoon series, but it has since spawned several iterations of movies, TV sitcoms, and animated series.
by Martha Sorren
TV Shows
The Fall 2020 TV Preview: These Are The 23 New Treats You’ll Want...
by Ariana Romero
Pop Culture
Mandy Moore Announces She Is Expecting Her First Child
Mandy Moore is giving fans another reason to cry that, for once, isn’t This Is Us-related. The singer and actress, who plays a mother of three on the
by Natalie Morin
TV Shows
SNL‘s Season 46 Host Lineup Is Everything
With Saturday Night Live At Home now fully in the rearview mirror, the cast of the NBC comedy sketch series are eagerly anticipating their return to 30 Roc
by Ineye Komonibo
TV Shows
Sex Education Adds 3 More Very On-Brand & Familiar Faces
Class is back in session: Netflix is adding some familiar faces to its Sex Education curriculum. The streaming giant just announced that three new cast mem
by Natalie Morin
TV Shows
When Did TV Get So Scary? 21 Horror Shows That Took Us Fro...
by Rosie Knight
Discover
R29 Stories & News
Watch
R29 Original Series & Films
Shop
R29's Most Wanted