Skip navigation!
Story from Entertainment News
Despite her bumpy road of late it seems things are looking up for Lindsay Lohan. She hosted SNL, pulled herself together for the Correspondents dinner (mostly, sort of), and now quite possibly is in the midst of reconciling with one time girlfriend, Samantha Ronson. Sure the pair has had a sordid twitter past, but they were very recently spotted canoodling at NYC hotspot Le Baron. According to an "insider," who told the goss to X17, '"Lindsay and Sam were whispering and laughing and they left the club holding hands. They didn't care who saw them, and they definitely seem to be back on. It was just like the old days — they couldn't get enough of each other!" Ahhh, young love, we can't get enough of them either. Well, until the next time. (X17) 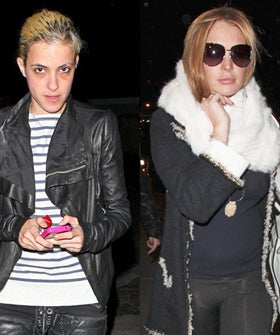