Skip navigation!
Story from Entertainment News
Most people would be happy with $46K year but for Cover Girl Linda Evangelista's five-year-old son Augustin, it's just the right amount per month. The 46-year-old model is seeking payment for full-time drivers and bodyguards for her son with billionaire ex-husband François-Henri Pinault. While many experts and NYC lawyers agree that this is way too steep (based on how much it actually costs to raise a son), Pinault's already put a $13 million California mansion on trust for his four-year-old daughter with current wife, Salma Hayek, so it may not be out of the question to think he'd fork over $1,500 a day or nearly $807,000 per year to his son. If he does pay up this will not only make Augustin a very lucky boy, but will also break records for child support. We're not making bets either way (especially not for $46k!), but if anyone's going to pay it forward to that extent, we wouldn't be surprised if it was a man nicknamed the "King of Luxury." Yep, that officially makes his son a prince. (NY Daily News) 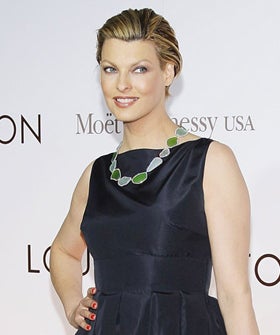