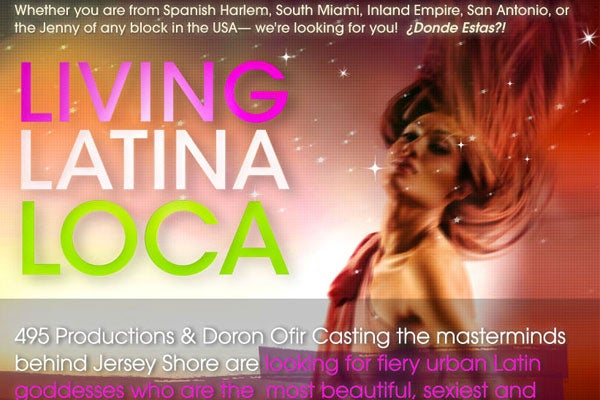 Could you imagine a Jersey Shore without Snooki? Impossible, right? No matter what your feelings are about the MTV blockbuster, even the most discerning critic must give the production group props for their immaculate casting. Now, the same pros are behind a new show touting itself as the next Jersey Shore, but with Latin roots. 495 Productions and Doron Ofir Casting are on the lookout for a killer (or at least controversial) cast of Latina goddesses — their search is obviously expected to garner several Miami locals. They’re looking for beauty, confidence, and fierce attitudes. Love of pickles, catchphrases, and arrest records are just optional. The production group has few qualifications (you must be between the ages of 21 and 35, and "appear" as Latina), but the application is pretty extensive, involving a long list of fill-ins and a video submission. If you’re one for ridiculousness and you’re not afraid to flaunt it (on national television), we suggest you take your chances and make Miami proud. Or at least sensational...

TV Shows
You Have 7 New Netflix Treats To Stream This Weekend — Here’s Wha...
by Ariana Romero
TV Recaps
R29 Recaps: Every Episode Of Netflix’s Jupiter’s L...
What if your overbearing parents were superheroes? That’s the question the new Netflix series Jupiter’s Legacy decided to ask. It’s based on a gr
by Leah Marilla Thomas
TV Shows
Jackson Is Officially Leaving Grey’s Anatomy. The Me...
Thursday night’s new Grey’s Anatomy episode, “Look Up Child,” feels different from the very first second. The installment forgoes a traditional nar
by Ariana Romero
Advertisement
Meghan Markle
Meghan Markle’s Latest Court Win Is A Gamechanger
Even as Meghan Markle and Prince Harry pivot to building the empire that is Archewell, the royal couple still has some old business to attend to in the for
by Ineye Komonibo
Pop Culture
Is Kim Kardashian Involved In A Bit Of An Art Heist?
Kim Kardashian denies buying an ancient Roman statue that Italian officials believe was “smuggled illegally” into the United States in 2016. (I
by Natalie Morin
Movies
The Best Movies To Watch On Netflix This Mother’s Day
by Elena Nicolaou
Movies
The 17 Sharpest, Most Terrifying Horror Movies By Women On Shudder
by Rosie Knight
TV Shows
Shadow & Bone Used A White Stunt Double For Inej. But Th...
Critics and fans of Netflix’s Shadow & Bone have praised the show’s diverse cast, something author Leigh Bardugo made a point to prioritize
by Natalie Morin
Movies
Yes, A Quiet Place Part II Is Actually Coming Out — & Here...
In 2018, A Quiet Place introduced audiences to a frightening post-apocalyptic world in which silence was humanity’s only savior. Almost three years (and
by Ineye Komonibo
Best of Netflix
Everyone Is At Home Watching These 10 Shows & Movies On Netflix R...
by Ineye Komonibo
Best of Netflix
Netflix’s Sons Of Sam Looks At The Real Cost Of True...
Spoilers are ahead. Those who watch Netflix’s Sons of Sam: A Descent Into Darkness looking for a Jinx-like reveal are in for a surprise. The new true
by Shannon Carlin
TV Shows
Chloe Veitch Reveals She May Have Found Romance On The Circle<...
Major spoilers for The Circle on Netflix are ahead. “I’m the most unlucky person in love on Netflix,” The Circle star Chloe Veitch laughs during a re
by Ariana Romero
Advertisement
Advertisement
Discover
R29 Stories & News
Watch
R29 Original Series & Films
Shop
R29's Most Wanted