Skip navigation!
Story from New York
...At least we're pretty sure she just wants to hang. While on tour in Hong Kong Gaga sported an outfit was was (designer, sure) but by all accounts rather... regular. You don't see those two words in the same sentence a lot. In a Blair Waldorf-esque Moschino frock from the fall '12 collection and mod white sunnies, Gaga could have been actually been an NYC Upper East Sider instead of an NYC-Upper-East-Sider-turned-international-singing-sensation. Small dead-giveaways? The extra-long blonde mane (of extensions), and so-high platform heels that we bet had guards anticipating the topple-over effect. But is this another sign that Gaga is done with her own image? Or just her casual wear? Either way, no worries Gaga, we're there to catch you should those heels give out. (RCFA) 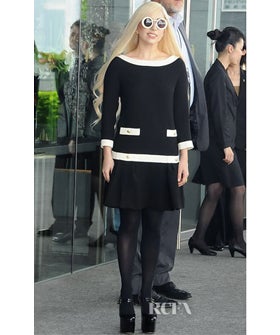