Skip navigation!
Story from New York
Could Galliano be teaming with Vogue for a comeback? Based on some sleuthing, and by the looks of some fuzzy Instagram pics, this just might be the case. Earlier this week, one Anna Wintour was captured greeting a possible John Galliano (or John Galliano look-alike) at the Ritz in Paris. This dubious date between the fashion maven and the ex-Dior designer is definitely an interesting pairing to occur on the eve of Raf Simons' debut couture show for Dior. To add to this strange spotting, Galliano was also seen with Vogue’s Creative Director Grace Coddington a few months ago. Could this be more than a casual nosh-and-catch-up, or was the meeting just a case of convincing doppelgangers? What do you think of the shady — or rather fuzzy — situation? (Fashionista) 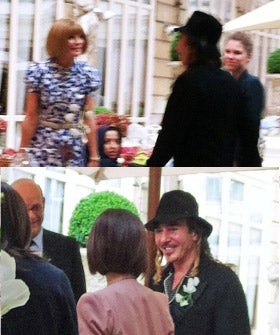