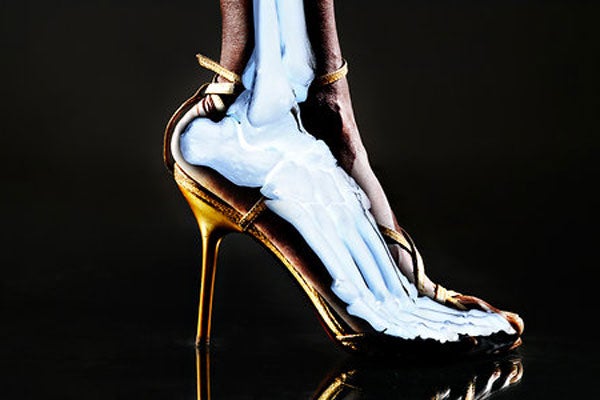 Ouch! Ooops! Ow! What kind of sadistic psychopath invented high heels anyways? We mean, between all the twisted ankles, blisters, and less-than-graceful trips to the pavement, if they didn’t make you look so darn good (and come in so many delicious variations - gimme-gimme) they’d probably be illegal to sell.
Point in fact, as the New York Times reports, scientists have finally proven what so many of us knew to be true – wearing high heels on a regular basis actually shortens your calf muscles, forcing your body into making harder, more harmful steps.
In a recently released study, Australian scientists discussed how they tracked the gaits of women who rarely rocked heels against those who are addicted to wearable skyscrapers by having them, among other things, walk on a pressure-sensitive metal runway – something we would have totally done if they had only asked us. The findings were conclusive: Wear heels long and often enough and your leg muscles reform, finding a new “default” position that redistributes effort and strain in potentially dangerous ways. The medical scientists behind the study advised to wear heels in moderation, which is what medical scientists say about pretty much everything.
Advertisement
Now, granted, you’d need a SWAT team (and a fairly large station wagon) to separate us from our sky-high kicks. But this is, nonetheless, good reading and food for thought as we tiptoe lightly through MePa cobblestones this coming Fashion Week. Ouch! Cripes! Ooof!
(New York Times)

Photo: Via the New York Times