Let us preface this by saying that we love the internet. No, "love" is not enough — we breath in its ASCII and grumpy-cat memes. But there comes a time during the day when it becomes too much, when the constant updating of information overwhelms us, the screen begins to hurt our eyes, and it is time for even the R29ers to call it quits. Between text messages, push e-mail notifications, and Facebook, we begin to lose sense of what’s surrounding us, who’s in our lives, and where we’re headed. In fact, our über connectedness has left us disconnected from the real world.
Advertisement
Henry Alex Rubin’s Disconnect weaves together different story lines in the same vein as 2004’s Crash. Only, it’s not so much why these people are linked, but how. The film engages in an examination of our basic everyday connections and innocent internet habits, and how something that’s meant to bring us closer together has in fact done the opposite.
Like most teenagers, Ben Boyd (Jonah Bobo) spends most of his time on Facebook. He doesn’t have many friends, so he turns to music as refuge. Rich, his father, who is wonderfully played by Jason Bateman, is so wrapped up in his law practice that his smart phone might as well have a seat at the family dinner table. So it comes as a shock to both Rich and his wife Lydia (Hope Davis) when a Facebook catfish prank that’s pegged Ben as the butt of the joke goes tragically wrong.
Then we meet Mike Dixon (Frank Grillo), the widower father of Jason (Colin Ford), one of the boys behind the prank. After Dixon’s wife passed, he lost his police officer job and put much of the blame on Jason, who behind the fake catfish persona of "Jessica", confides this to Ben over the Internet. Dixon, of course, is now a private detective specializing in cyber crime. This leads us to the next link: He’s assigned to investigate the identity theft case of Cindy and Derek Hull (played by Paula Patton and Alexander Skarsgård). Their story reveals a couple who's retreated from each other to their respective internet corners after the death of their child.
Advertisement
The final story is a stretch, but it still works. Nina Dunham (Andrea Riseborough) is a TV reporter whose in depth research into a cyber sex brothel employing underage boys and girls becomes a huge hit. Her investigation results in FBI interference for which she turns to lawyer, Rich Boyd. Circle complete. In this segment, Marc Jacobs plays a cyber-pimp who's recruited Kyle (Max Thieriot), a young man who becomes the focus of Nina’s infatuation. 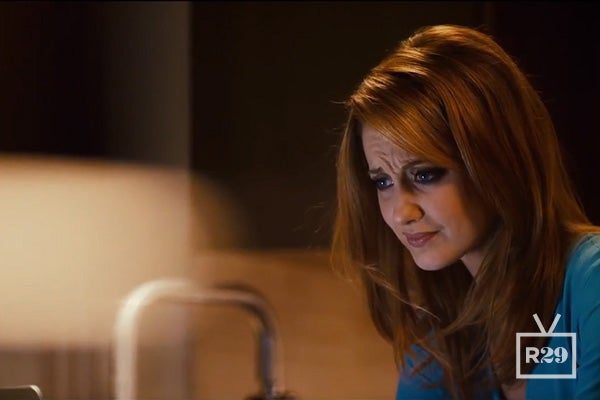 First off, Disconnect is a thriller, leaving us glued to our seats with a pit in our stomachs as the credits roll. What the movie lacks in groundbreaking revelations, (the notion that we’re more disconnected than ever despite living in the plugged-in age is a big fat "no duh") it makes up for in stellar performances. We’ve been tracking Marc Jacobs’ first foray into the movie industry since we learned he was cast, and fashion fans, be warned: His role isn't a starring one, but it is memorable. He plays a father figure to the runaway children while at the same time exploiting them by encouraging them to engage in sex work and plying them with drugs. But, his constant attention and committed protection is a dark reflection to Jason Bateman's absentee father. Interestingly, Bateman’s drama chops are as strong as his comedic, eschewing his typical sheepishness to play a man who is trying to protect a family he barely knows. And, we are calling it now: With her red hair, incredible acting chops, and host of big budget movies in the pipeline (Oblivion, for one), Andrea Risenborough is on a Jessica Chastain-like trajectory. Her performance is riveting and the relationship between her and Thieriot (who is supposed to be underage) is confusing, nuanced, and tense. (Also, though it feels a little weird, Thieriot’s portrayal of a boy wrapped up in the online sex industry has made him a bonafide hottie.)
Advertisement
While some aspects of the plot feel a little over the top — like Skarsgård's decision to become an identity thief-stalker — the message and impact isn't lost. The characters engage in activities we do everyday (and may even be doing right now, at work). The gusto of the film is found not in the outcome of each story, but in the over all sense that we're merely voyeurs watching these brief moments of each character's life unfold — which, in many ways, is the way we engage with the Internet. We've stumbled in on these characters' lives and when the movie ends, their lives will continue on. Do the Hulls recover? Does the cyber sex site continue? It doesn't matter, much like the end of a YouTube video.
Rather, Rubin is asking the audience, who will undoubtedly turn their phones back on after the credits, to “look up.” He wants us to pull ourselves away from the screens we surround ourselves with for a bit, or at least recognize their potential to make us unbelievably lonely. Disconnect does what movies are meant to do, connect with us. It’s a cautionary tale that will leave you shaken, aware, and staring at your phone wondering, “What am I doing?”
Disconnect opens in select theaters April 12.
Photo: Courtesy of LD Entertainment.
Celebrity Style
Dua Lipa Paired A Neon Suit With This Season’s Hottest Swim Trend
Who says you have to be any wear near a body of water to wear a bikini top?  On Friday, Dua Lipa shared her latest night-out look on Instagram, includ
by Frances Solá-Sant...
Style
Got $2,000? If So, Have You Considered Buying Lady Gaga’s I...
Inauguration Day was packed full of show-stopping looks — from Kamala Harris’ purple Christopher John Rogers dress to Ella Emhoff’s Miu Miu coat and
by Eliza Huber
Style
Lady Gaga Just Wore Two Of Summer’s Biggest Swim Trends
Twelve years after she emerged from a swimming pool in latex for the ”Poker Face” music video, Lady Gaga is back to her old ways. On Wednesday, the “
by Eliza Huber
Advertisement
Celebrity Style
Margot Robbie’s Latest Look Includes Statement Shoulders & Cut-Outs
The summer of skin is well underway, but actress Margot Robbie is doing her best to support the puffy shoulder-pad trend.  On Wednesday, the I,Tonya a
by Frances Solá-Sant...
Britney Spears
What Britney Spears’ Style Taught Me About My Own Coming Of Age
In the wake of the Framing Britney Spears documentary and with the #FreeBritney movement gathering momentum, the world is revisiting the various dehumanizi
by Frances Solá-Sant...
Style
Ashley Graham’s Latest Style Muse? Steve From Blue’s Clues
On Monday, Ashley Graham took to Instagram to share the inspiration behind her most recent look: Steve from Blue’s Clues — and no, we’re not kidding.
by Eliza Huber
Celebrity Style
Chain Belts Are Trending, Thanks To Olivia Rodrigo
Reigning queen of the ‘90s style comeback Olivia Rodrigo has championed many trends from the decade — including slip dresses, combat boots, and opera g
by Frances Solá-Sant...
Style
Lizzo’s Love For Itty-Bitty Bags Is Only Getting Bigger
Hey @lizzostinybag, it’s time for an update. This weekend, Lizzo reminded us of her obsession with itty bitty purses in a four-photo Instagram slideshow.
by Eliza Huber
Celebrity Style
The Fendi Baguette Is Back For The Sex And The City Reboot
It’s been more than 15 years since we last saw Carrie Bradshaw and her go-to Fendi Baguette bag on TV. But the upcoming release of Sex And The City’s r
by Frances Solá-Sant...
Style
Megan Thee Stallion’s Sports Illustrated Cover Featu...
The Summer of Cut-outs continues. On Monday, Sports Illustrated revealed the three cover stars for its annual swimsuit issue — tennis star Naomi Osaka, m
by Eliza Huber
Fashion
With A New Clothing Collection, K-Pop’s Ten Lee Takes Fans Inside...
“When you learn languages, you learn different ways to express yourself, so I feel those different expressions come through in what I create."
by Natalie Morin
Style
Sarah Jessica Parker’s Latest Look Is A Carrie Bradshaw Signature
On Thursday, while filming the upcoming Sex and the City reboot titled And Just Like That, in Manhattan’s NoHo neighborhood, Sarah Jessica Parker was spo
by Eliza Huber
Advertisement
Advertisement
Discover
R29 Stories & News
Watch
R29 Original Series & Films
Shop
R29's Most Wanted