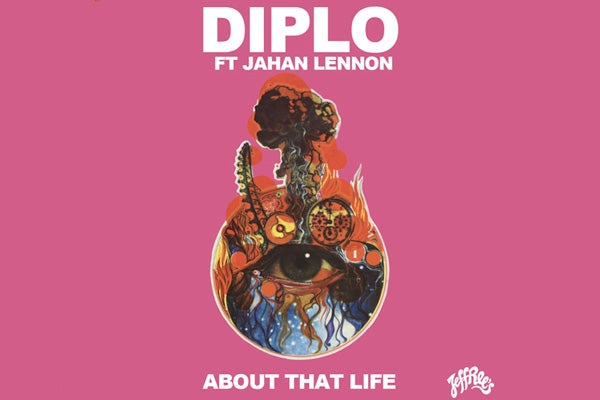 When Diplo released his last solo LP, Florida, way back in 2004, M.I.A. had barely dropped her first mixtape, George W. Bush was president, and Major Lazer was just a gleam in its daddies' eyes. Since then, Wesley Pentz has starred in Blackberry ads, produced Lil Wayne tracks, and documented his globetrotting shenanigans for thousands on Twitter (he even has a coffee table book available at Urban Outfitters.) And now, all these years later, Diplo has announced a new album under his solo moniker, but his latest single “About That Life” is not what you’d think.
Or, maybe it is: Diplo is perhaps the most mercurial of all producers working today, attacking genres like baile funk, dance hall, or moombahton, with equal respect and skill. “About That Life,” though, isn’t dance music at all. Rather, it’s a languid piece of psychedelic pop — Diplo describes it as "Psychedelic Southern Gospel" — sung by Jahan Lennon of kaput Philly punk band PO PO.
Advertisement
All slow-mo with the occasional pan-pipe flourish (!!), the song has nary a beat drop in sight. Still, if you can come at it without preconceptions, it maintains, if nothing else, Diplo’s ear for hooks and deft curatorial skill. Maybe after all these years on the road, Diplo just needed to chill out a bit. And if that means more tracks like “About That Life,” we don’t mind it at all.
"About That Life"

Movies
11 Movies For People Who Are Always Thinking About Wine
by Lia Beck
TV Shows
The Summer 2020 TV Preview: These Are The 23 New Treats You’...
by Ariana Romero
TV Shows
R29 Binge Club: Homecoming Season 2 Recap
You should probably know that Homecoming season 2 starts closer to the end than the beginning. The Amazon Prime Video series is a Memento-like puzzle in wh
by Shannon Carlin
TV Recaps
R29 Binge Club: Selling Sunset Season 2 Recap
The first season of Netflix’s real estate reality show, Selling Sunset, ended up focusing more on the drama between the stunningly beautiful realtors
by Jean Bentley
Amazon
Let’s Untangle Homecoming Season 2’s Unhappy E...
Warning: spoilers ahead for the Homecoming season 2 finale. The end is the beginning, or maybe the beginning is the end? Either way the Homecoming sea
by Shannon Carlin
TV & Netflix
Introducing All The Teens In Netflix’s Newest Thriller: ...
by Gina Vaynshteyn
Best of Netflix
The Lovebirds Cast Is Full Of People You Definitely Know F...
by Ariana Brockington
Best of Netflix
Every Song From The Lovebirds Soundtrack Is A Song You Nee...
by Ariana Brockington
Movies
14 Movies That Feel Like Summer & Where To Stream Them
by Rachel Paige
Documentary
Norma “Jane Roe” McCorvey’s Final Act Was Prese...
This week, the world found out a lot more about the woman behind one of the most well-known Supreme Court cases. The new FX On Hulu documentary AKA Jane Ro
by Lia Beck
TV Shows
Ryan Murphy Just Pitched A Glee Pilot Redo With Ben Platt ...
Ryan Murphy saw everyone rediscovering Glee on TikTok and decided to do them one better: a totally new Glee pilot. While such a thing is not yet in existen
by Kathryn Lindsay
TV Shows
This Cult Favorite Show Is Unexpectedly Getting A Second Season
When the animated comedy series Tuca & Bertie premiered on Netflix last summer, viewers were immediately taken by the sometimes poignant, always hilari
by Ineye Komonibo
Discover
R29 Stories & News
Watch
R29 Original Series & Films
Shop
R29's Most Wanted