Skip navigation!
Story from Fashion
Photo: courtesy of American Apparel.
Let me set the scene for you: The year is 2014. It’s the middle of Barack Obama’s presidency, and everyone is discussing “The Oscar Selfie” and Pharell wearing “the hat.” You just got a text on your iPhone 6 from your bestie while “Summer” by Calvin Harris plays softly in the distance from your iHome. “I heard this spot is lit tonight, what are you wearing?” she asks. There is only one right answer: an American Apparel Disco Skater Dress.
I’m sure you’ve heard of this dress, or at least seen it, but let me dust off your memory bank in case you cannot quite recall it in all of its resplendent glory. This iconic item of clothing, ubiquitous in the early 2010s among the college crowd, was made out of 90% nylon and 10% spandex. It was shiny, yet not really sparkly, skin-tight on top and flowy on the bottom, cut to graze mid-thigh and free-flowing, perfectly calibrated for all-night twirling.
Advertisement
I owned two of them, in red and black, and I sported them almost every weekend with another style staple from the early 2010s: my Jeffrey Campbell Lita platform boots. No one could touch me with that combo. I was in college up in Vermont, and yet I — and every other girl on campus who owned the dress, too — insisted on wearing it out even in the dead of winter.
Earlier in the summer when the coronavirus pandemic was flirting with the idea of possibly letting up, and fashion welcomed the party dress era, there was only one question on my mind: Is the American Apparel Disco Skater Dress ready for a comeback?
But before answering that, it’s important to understand why the dress was so popular in the first place. In the 2000s and 2010s, American Apparel owed its initial success to the fact that, true to its name, its products were made in America. While its founder, Dov Charney, was ousted from the company, following sexual harassment and financial mismanagement allegations, in 2014, back in the '00s, he was just an entrepreneur who understood young people’s appetite for clothing that was simple yet sexy.
A few stand-out icons from the American Apparel “going-out ” inventory included: the Disco Pants, the Gloria-V Bodysuit, and the Interlock Mini Skirt. However, the ultimate party look was the Disco Dress; if you didn’t see at least three girls wearing one on a Friday night, you probably weren’t actually out. Glossy, metallic, and rich in jewel tones, the American Apparel Disco frock attracted all kinds of young people, from sorority girl to athlete.
Advertisement
In the late 2010s, the dress started disappearing from the nightlife scene. While Deirdre Clemente —  historian and curator of 20th Century material culture at the University of Nevada, Las Vegas — points to the general decline of popularity of clothing made from synthetic fibers like nylon, in favor of natural fabrics like cotton, American Apparel’s fall from grace is also likely to blame.
Recently, as people began to go out again, party dresses in the vein of the American Apparel icon have started popping up. “When I went to buy Outdoor Voices’ Exercise Dress, I hesitated because I knew that I had something eerily similar in my closet already,” says Kerry Merrill, Los Angeles-based creative producer. “The Disco Dress never really went anywhere, it just took on a different form.” Similar styles like the With Jéan Alexa Dress, a terry cloth frock, and Bamba Swim Bounty Dress, a halter-neck cover-up, are going viral on TikTok. Alternatively, there’s even talk of the bandage dress, another relic of the 2000s party scene, making a comeback, too.
Add to the mix the roller-skating boom that heated up in the pandemic and wielded influence in the style world, and it’s clear that there is no better time to bring the Disco Dress out from the back of our closets. “Its sporty and practical nature lends well to outdoor pursuits that are gaining momentum,” states Marian Park, a trend forecaster at marketing agency WGSN.
Advertisement
The party dress also comes with an added bonus: a reminder of the days and nights when those of us who wore it as 20-somethings used to have dance-filled, sweaty, and, most importantly, carefree lives. They are a wearable monument to the idea of freedom as we used to know it. “This dress brings me back to a time where I actually went out with friends, where I actually had fun, and where I actually did things,” says Sarah Caffry, a first-year medical student at University of Vermont. As the pandemic’s grasp shows little signs of letting up for good, that reminder is reason enough to bring the Disco Dress back into our rotation. (If you no longer have your version from college, there are plenty of options available on secondhand sites like Poshmark, eBay, and Depop.)
So queue up your Ke$ha playlist, slip on those Jeffrey Campbell Litas, and get ready to twirl the night away: the Disco Skater Dress is ready for its homecoming.
shop 4 products 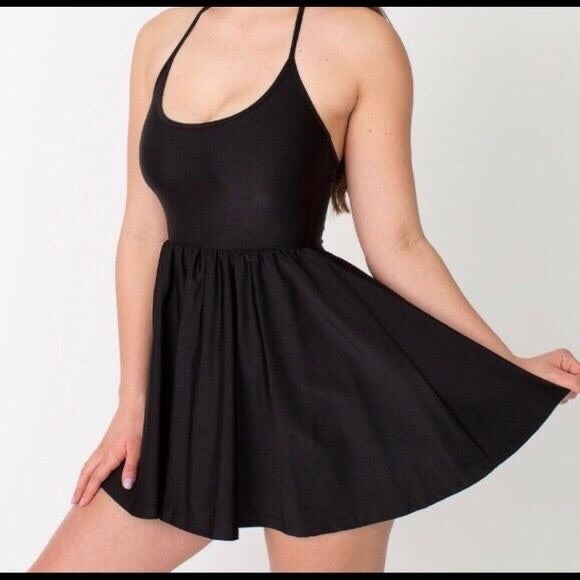 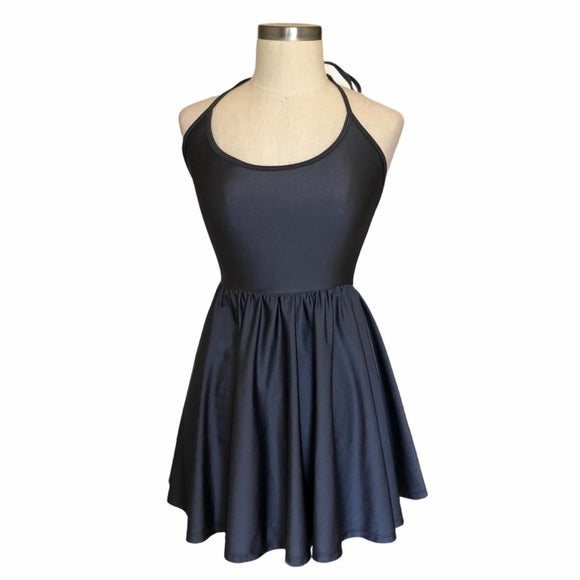 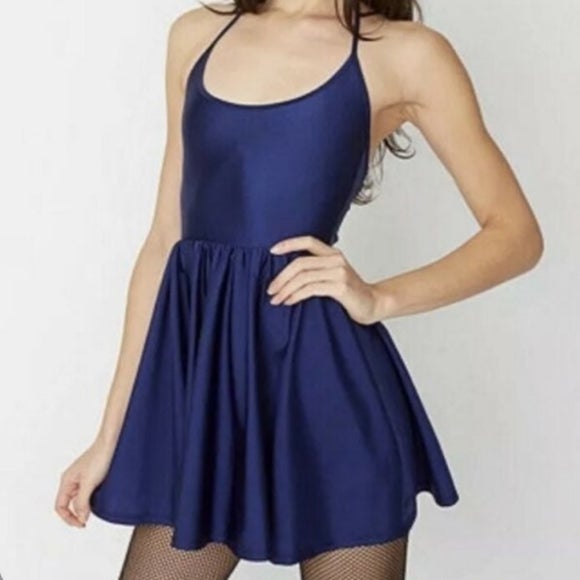 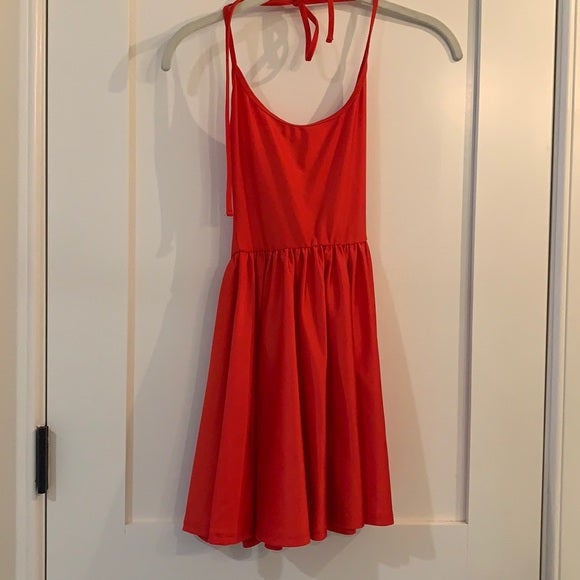 American Apparel
Red Disco Halter Skater Dress
$20.00$70.00
Poshmark
At Refinery29, we’re here to help you navigate this overwhelming world of stuff. All of our market picks are independently selected and curated by the editorial team. If you buy something we link to on our site, Refinery29 may earn commission.
Unbothered
This Self-Taught Jewelry Designer Is Redefining Black Luxury
Creating luxury jewelry takes art and craftsmanship. Black-owned brand KHIRY — known for its representational take of Blackness and storytelling within t
by Venesa Coger
Designers
How Amanda Forastieri Is Helping Revive Puerto Rico’s Garment Ind...
Even before launching her namesake brand earlier this year, Puerto Rico-born designer Amanda Forastieri has used fashion as a tool of political and cultura
by Frances Solá-Sant...
Style
Skims’ Sold-Out Swim Collection Is Coming Back — Is It Wort...
When the debut Skims Swim collection launched in March, it didn’t take long for the entire swimwear line to sell out. This was not entirely surprisin
by Irina Grechko
Advertisement
Designers
“Virgil Abloh: ‘Figures Of Speech’” Exhibit Invites Viewers To “Q...
Question everything: This was the motto of the late fashion designer Virgil Abloh. It was also the thought running through my head as I walked through the
by Irina Grechko
Designers
Why This Jellyfish-Like Silhouette Is My Style Go-To
Post-college, I was in dire need of a paying job while attempting to pursue an editorial career and it just so happened that the Pleats Please Issey Miyake
by Diana Tsui
Designers
Why You Won’t See Rainbows In This Gender-Affirming Brand’s...
When the founders of Urbody — a brand making affirming active- and underwear for trans, nonbinary, and gender non-conforming people — set out to create
by Lindsay Lee Wallace
Designers
The New Christopher John Rogers Runway Show Was Worth The Two-Yea...
Even before the Christopher John Rogers show began, the unabashedly optimistic styles by the Louisiana-born, New York-based designer were on full display.
by Irina Grechko
Fashion
How Chromat Is Revolutionizing Swimwear
Becca McCharen-Tran is waiting for a call from DHL. The samples from Chromat’s Spring 2022 collection of inclusive swimsuits — for trans femmes, n
by Carli Whitwell
Style
Costume Institute’s New Exhibit Highlights American Fashion’s Ove...
What is American fashion? A little less than a year ago, the Metropolitan Museum of Art’s Costume Institute began to answer this question with the “In
by Irina Grechko
Best Wedding Dresses
Meet The Bridal Designers Behind Some Of Today’s Coolest We...
Welcome to Aisle Style, a week-long series that features the most untraditional wedding fashion trends, bridal designers behind the coolest wedding lo
by Fawnia Soo Hoo
Designer Collaborations
Iris Apfel x H&M Is Here — Here’s How The Style Icon Wants You To...
by Irina Grechko
Designers
Alexander McQueen Returned To NYC After 20 Years With A Nature-In...
There was a lot of talk about mushrooms ahead of the Alexander McQueen Fall 2022 fashion show. As soon as teasers began to quite literally sprout in the fo
by Irina Grechko
Advertisement
Advertisement
Discover
R29 Stories & News
Watch
R29 Original Series & Films
Shop
R29's Most Wanted