Skip navigation!
Story from Style
Photo: courtesy of Eliza Huber.
Ever since Netflix released Bridgerton, the Regency-era drama has not only kept us glued to the TV — in its first month on Netflix, the show reached 82 million viewers — but its clothing has also seeped into our wardrobes. In the four weeks following its release alone, search for corsets on global shopping platform Lyst increased by 123%. During Fashion Month in February, taut bodices were shown on the fall '21 runways of Markarian, KNWLS, Prabal Gurung, and more. When Billie Eilish appeared on the June cover of British Vogue in a bevy of custom corsets by Gucci, Burberry, Mugler, Alexander McQueen, Vivienne Westwood, and more, search for the constricting lingerie item went up 74% in the span of just two days, according to Lyst.
Advertisement

Eilish wasn’t the only celebrity spotted wearing the trend. Miley Cyrus wore a Schiaparelli corset while hosting SNL in May, followed by Katy Perry, who wore a white Maticevski suit with a black corset while filming American Idol. At the BRITs, Dua Lipa stunned in a Vivienne Westwood corseted dress; at the MTV Movies & TV Awards, Yara Shahidi paired an Erdem bodice with an Adidas tracksuit; and Olivia Rodrigo wore a plaid Vivienne Westwood corset during her own SNL performance.
In turn, one thing has become clear: Fashion’s obsession with Regencycore isn’t going anywhere. But, what is it really like to wear a corset IRL?
Photo: courtesy of @elizagracehuber.
Miaou Campbell Corset, $225, available at Miaou.com; Denim Forum The Joni Loose Long Short, $88, available at Aritzia; Zara belt; Bob Oré Alexia Bag, $199, available at BobOre.com.
Photo: courtesy of @elizagracehuber.
Le Specs Carmito Sunglasses, $59, available at LeSpecs.com; TNA Malibu Dress, $50, available at Aritzia.com; SKIMS Waist Trainer, $68, available at SKIMS.com; Sonya Lee Alberta Bag, $370, available at SonyaLee.co.
To find out, I tested an array of different styles, from NSFW lingerie to more fashion-forward iterations, including the SKIMS waist trainer, boned Miaou styles (worn by corset queen Kim Kardashian in the final season of Keeping Up With The Kardashians), and a sheer Savage x Fenty corset dress.
According to SKIMS’ site, the waist trainer, which is available in black and tan and sizes XXS to 4X, is meant to “accentuate your natural curves” and be worn underneath clothing. Though made from neoprene and soft to the touch, as the name suggests, it was the most constricting of the corset styles I tested out. As such, it didn’t feel the most comfortable when I wore it under a fitted gray dress while running errands in 90-degree weather. Even less so after I ate three servings of pasta (plus dessert and triple the recommended daily amount of free garlic bread). But then again, I had been warned by experts: “A corset will never be truly comfortable,” Bridgerton costume designer Ellen Mirojnick told Refinery29 prior to the show’s release.
Advertisement
While I expected a more true-to-history corset experience (read: painful) with the waist trainer, I didn't foresee that the more fashionable corsets would be as constricting. Thanks to the boning and power mesh, Instagram-favorite brand Miaou’s styles resulted in marks on my back (albeit much-improved posture) after a day of working from home. In addition to being as stylish in person as they appear on social media, the Campbell mesh corset and the Imogene corset both created the look of a “blossoming bosom,” as Mirojnick described it in December, where there really wasn’t one (I wear a 32B bra size).
Photo: courtesy of @elizagracehuber.
Miaou Campbell Corset, $225, available at Miaou.com; Bob Oré Alexia Bag, $199, available at BobOre.com; Wilfred Tryst Dress, $98, available at Aritzia.com.
Photo: courtesy of Eliza Huber.
Miaou Imogene Corset, $225, available at Miaou.com; Bob Oré Alexia Bag, $199, available at BobOre.com; Tna Berman Skirt, $68, available at Aritzia.com.
I wore the Campbell corset in a handful of ways over the course of a week, layering it over a silk mini dress, as well as with Bermuda-length denim shorts. Next time, I’ll take Kardashian’s route, pairing it with a matching mini skirt from the brand. Inspired by her look, I combined the brown-and-white Imogene corset with my own black mini skirt and knee-high boots.
When it came to the third style, Rihanna’s take on the corset felt less like an actual corset, despite the fact that it had laces running up the back, or a dress, as the name suggests, and more like straight lingerie. Given that the cups on the Savage X Fenty’s watercolor tie-dye corset dress are completely sheer, I found that I couldn’t test it out on the streets. The piece did, however, look cute while worn in the confines of my bedroom.
Advertisement
Throughout this process, I simultaneously fell in love with corsets and sympathized with Bridgerton star Nicola Coughlan, who told Refinery29 in December of the sense of relief that ensues when you take off a corset after a long day: “Your ribs are just like, Ah.” While I wouldn’t recommend wearing a waist trainer for a three-course Italian dinner, nor a bone-in corset for a day spent sitting at the computer, my experience with corsets was far more enjoyable than I had expected it to be when I took on this task. Not only did they create the illusion of cleavage while also holding me in, but they also made for a fun and sexy styling piece in my otherwise understated wardrobe.
Sure, as Coughlan said, it feels good to take one off at the end of the day. But wearing one, especially a stylish one, isn’t half bad either.
At Refinery29, we’re here to help you navigate this overwhelming world of stuff. All of our market picks are independently selected and curated by the editorial team. If you buy something we link to on our site, Refinery29 may earn commission.
shop 6 products 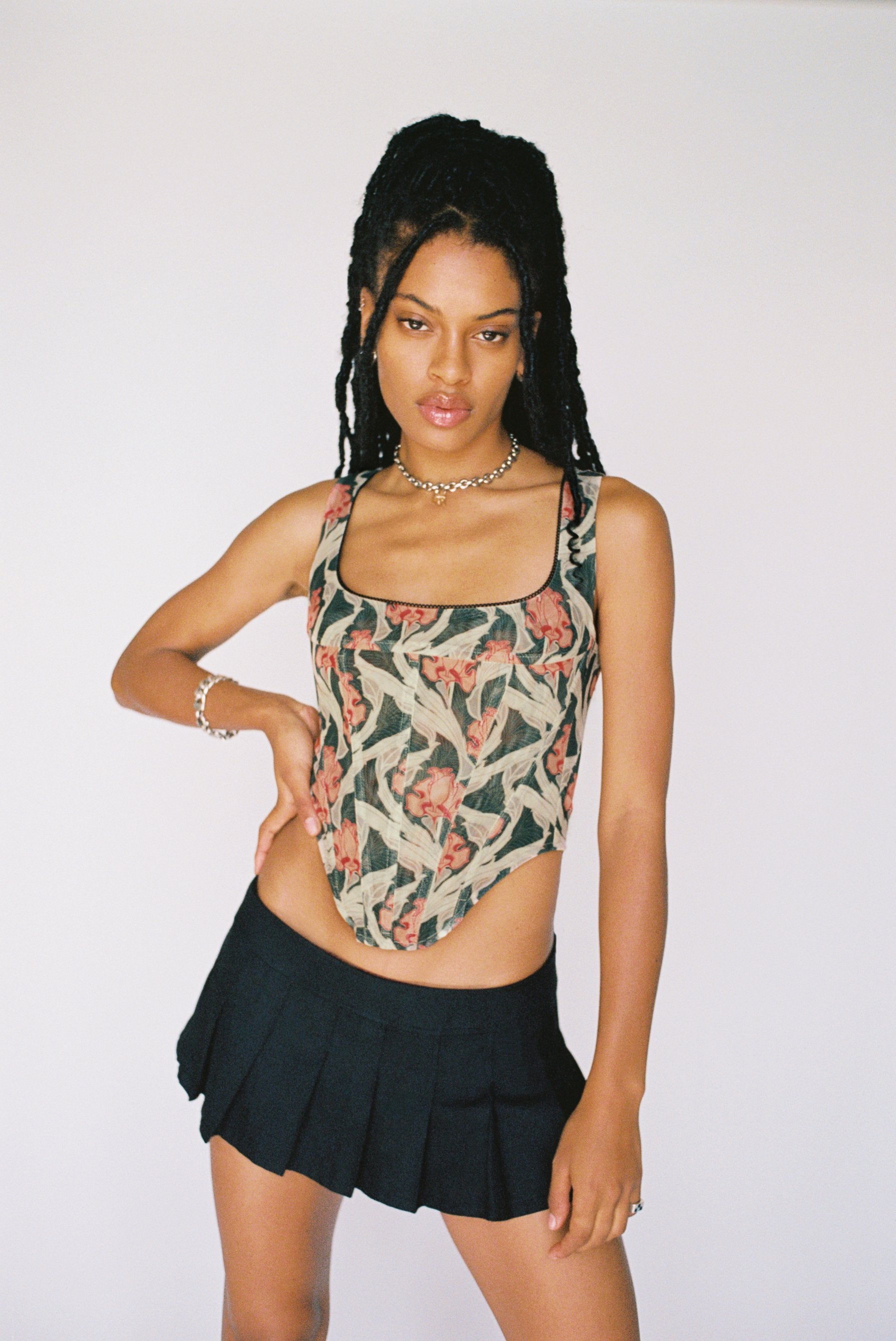 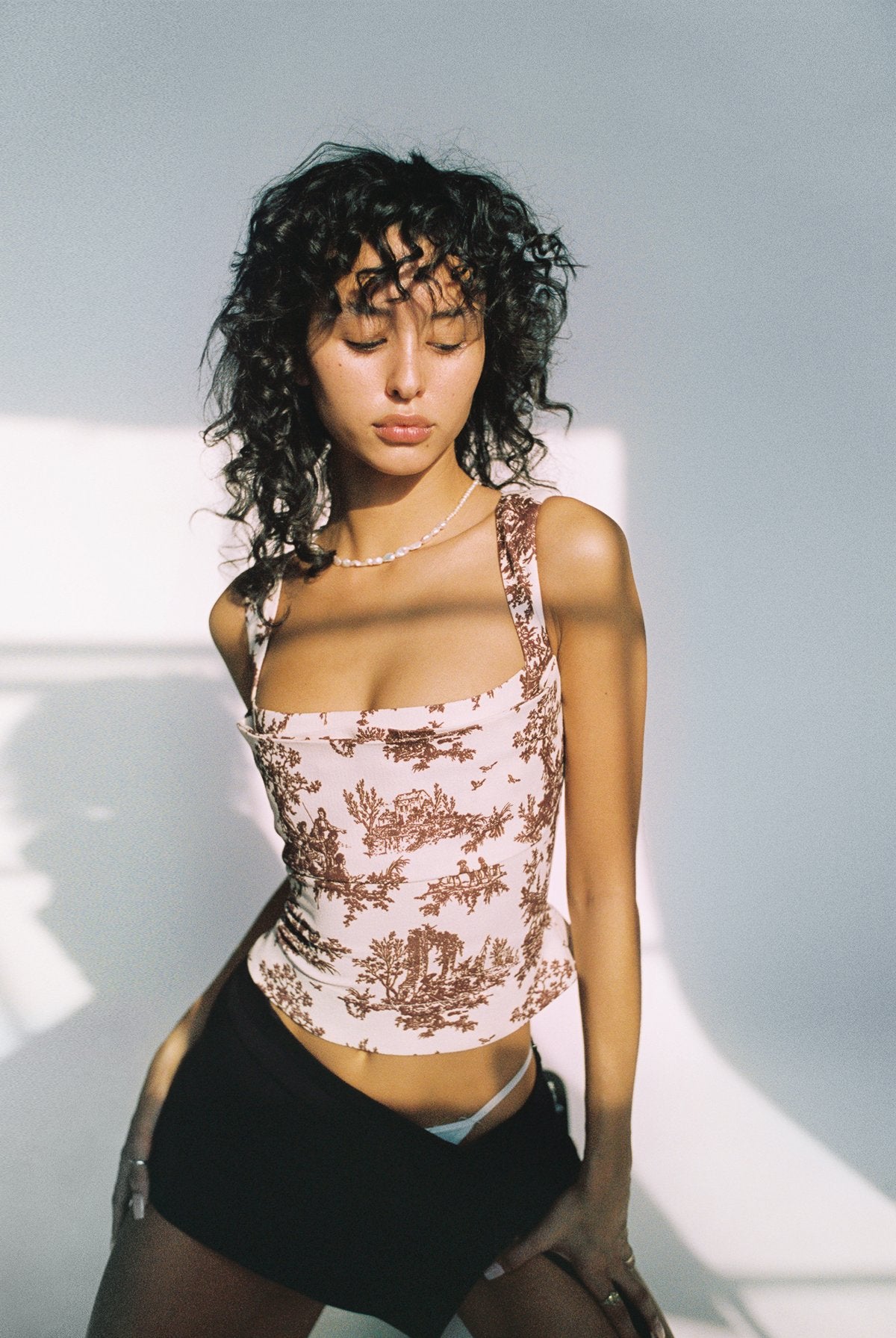 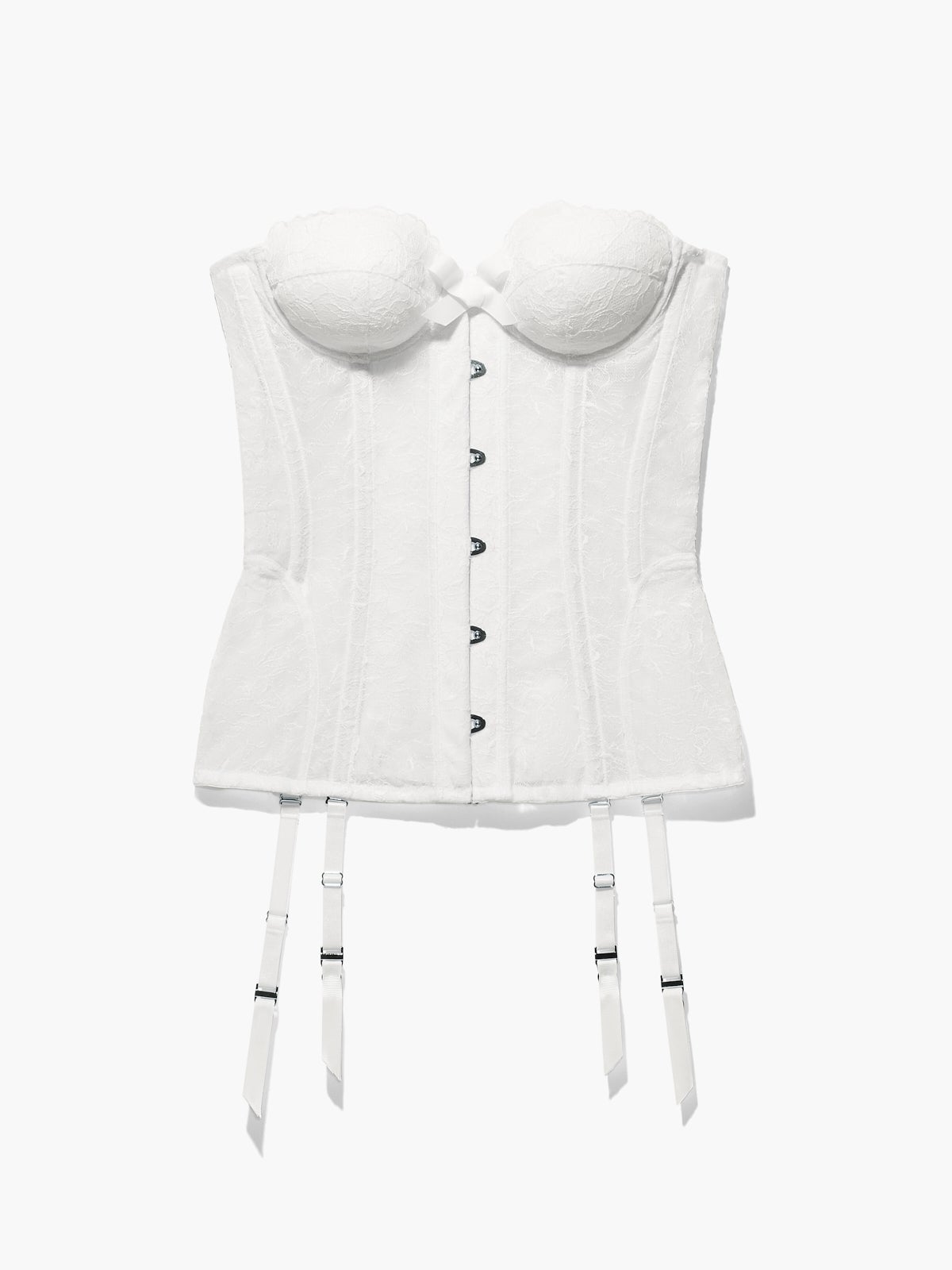 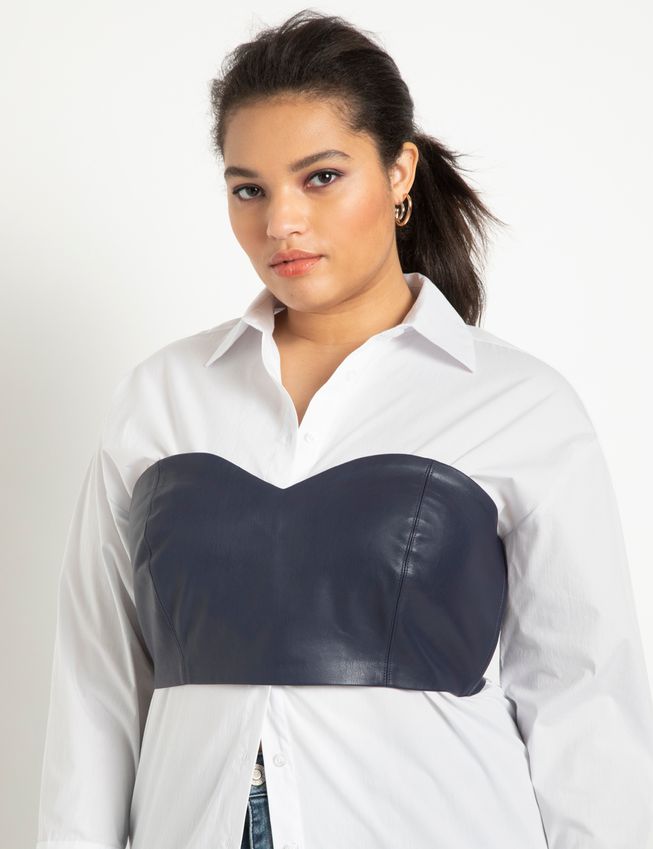 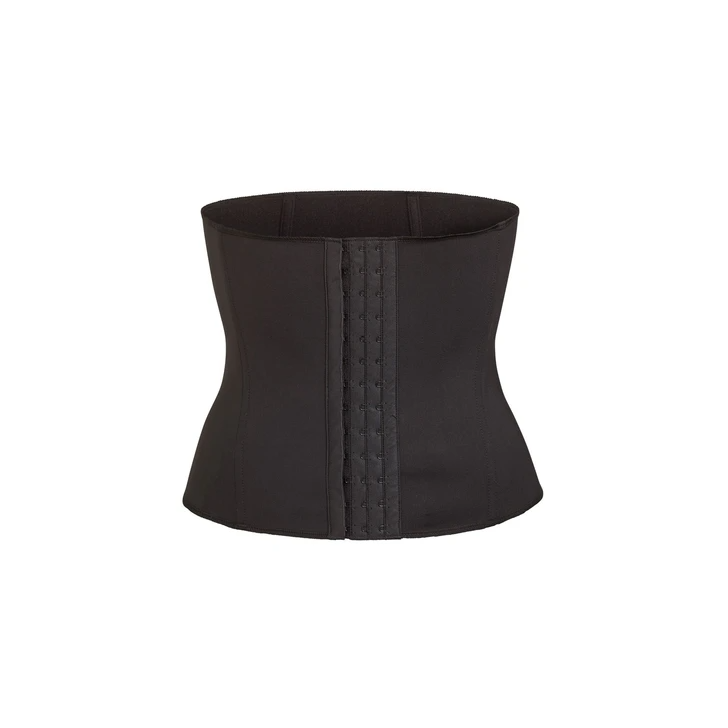 Skims
Waist Trainer
$68.00
Skims
Fashion
7 Copenhagen Fashion Week Fall 2023 Trends To Try Now
Perhaps no other city is simultaneously as inspirational as it’s pragmatic when it comes to fashion trends as Denmark’s capital. Sure, New York, London
by Kristen Bateman
Denim
These Top Jean Trends Are The Stuff Of Denim Dreams
Fashion icon Diana Vreeland once famously said: “Blue jeans are the most beautiful things since the gondola.” You certainly don’t need to
by Amanda Randone
Best Wedding Dresses
6 Bridal Fashion Trends That Will Be Everywhere In 2023
This year, wedding fashion will take a turn for the glamorous. As evidenced by the New York Bridal Fashion Week Fall 2023 lineup, casual slip dresses and m
by Frances Solá-Sant...
Advertisement
Fashion
7 Shoe Trends To Up Your Footwear Game In 2023
If your New Year’s resolution is to treat your wardrobe to a seasonally appropriate update, the best place to start is from the bottom. Solid style choic
by Amanda Randone
Fashion
6 Fashion Trends That Will Take Over 2023 — Shop Them Now
Four months after the new runway collections made a case for all we should expect in the new year, the 2023 fashion trends have started making their way in
by Irina Grechko
Fashion
8 Jewelry Trends That Will Ensure You Shine Bright In 2023
If your outfits aren’t making you smile, it might be time to update your accessories collection. At least that’s what Shopbop fashion director
by Amanda Randone
Engagement Rings
7 Engagement Ring Trends That Will Be Big In 2023, According to E...
Unlike popular runway styles, engagement ring trends tend to move on a slower, subtler track (there’s not a wedding ring equivalent of a butterfly top or
by Nicole Kliest
Fashion
7 Handbag Trends To Tote Around In 2023
While a new year doesn’t necessarily need to mean a new you, it could mean it’s time for a new handbag. This essential piece of your next arm p
by Amanda Randone
Coats
Scarf Jackets Are Winter’s Most Viral Coat Trend
HeatTech leggings, turtleneck, North Face jacket, scarf, beanie. That’s the winter essentials lineup I return to again and again when bundling up for the
by Aemilia Madden
Fashion
Mood Jewelry Is Back — & All Grown-Up
Some of my earliest memories of experimenting with personal style include acquiring a sizable collection of mood rings. Most were run-of-the-mill versions
by Shelby Ying Hyde
Fashion
5 Style Aesthetics That Will Take Over Fashion In 2023
The concept of fashion aesthetics is nothing new to the trend forecasting industry. Seasonal style stories that often pop off on social media platforms lik
by Kendall Becker
Fashion
How To Style Cowboy Boots For Winter — According To R29 Editors
Following the year-long reign of platform heels, there’s a new shoe trend that’s set to steal the spotlight this winter: cowboy boots. Having f
by Irina Grechko
Advertisement
Advertisement
Discover
R29 Stories & News
Watch
R29 Original Series & Films
Shop
R29's Most Wanted