Skip navigation!
We’re just a week from Election Day, but polling places for early voting and dropboxes for mail-in ballots are already filling up with people ready to make sure their votes count — including celebrities, all of whom are dressing for the occasion. Thus far, we’ve seen Jennifer Aniston drop off her ballot wearing a blue sweatsuit and a lace face mask, Zoë Kravitz mail in her ballot in a slouchy beanie and an off-white hoodie, and Blake Lively, in photoshopped heels and pink, wide-leg jeans, ship her and Ryan Reynolds’ ballots off to be counted. But even prior to last week, fashion A-listers ranging from Zoe Deutch to Ashley Graham made fashion statements in matching hot pink suits as they encouraged people to vote.
Advertisement
Mandy Moore posed in her backyard wearing the suit in question with black pumps and matching lipstick; Kerry Washington paired hers with mirrored sunglasses, pearl earrings, and equally vibrant pink heels; while America Ferrera got dolled up in Euphoria-inspired eye makeup, which she wore with the suit, white slip-on sneakers, and a T-shirt that read, “Superwoman. Superhero. Superstar. Superpower. Supermajority.” Busy Phillips, Debra Messing, Deepica Mutyala, Amber Tamblyn, Michelle Kwan, and more were also seen donning the bright pink co-ord. Of course, nothing about the surge in suiting was accidental.

The culprit: Argent — the women’s workwear brand and a favorite of Hillary Clinton's during the 2016 election — and its recent collaborative collection with Supermajority — an organization fighting for a more equitable future for all women. In October, the powerhouse duo launched a campaign titled “Ambition Suits You” centered around the fact that in 2020, women make up more than half of the people — and, hopefully going by those numbers, voters — in the United States. “Women are voting, and we are an unstoppable force for good,” Cecile Richards, a co-founder of Supermajority, tells Refinery29. To spread the word and encourage women around the country to vote, the two brands came together to create a four-piece hot pink collection, which includes, yes, the can't-miss suit, as well as the aforementioned Super Stacked T-shirt and a pack of pins to attach to it.
The bright pink suit, which is included in Argent’s Election Collection, marks the brand’s first-ever foray into extended sizing. (Despite currently being on backorder, it's available in sizes 0 to 24.) The proceeds for every sale of it will go toward Supermajority’s mission of emboldening women to “unapologetically give a voice to the issues that matter most to them and step into their collective power,” according to the release. It’s no wonder so many celebrities are in full support. (Others involved in the Ambition Suits You campaign include Sophia Bush, Zoe Saldana, Noor Tagouri, Katie Couric, Amy Schumer, Brooklyn Decker, and Meena Harris.) “This collection celebrates women embracing their ambition and their power,” Richards says. “Seeing women across the country wearing this beautiful pink suit and their Supermajority T-shirts as they head to the polls to vote says it all.”
Advertisement

To all the people who say our ambition is a bad look: Face it. Women are the most powerful force in America. We are the majority of people and voters in this country and we will determine the outcome of this election. @argent x @supermajority have teamed up to celebrate our ambition and our awesome civic power loudly and proudly with this limited-edition bright pink suit. With proceeds benefiting Supermajority’s tireless efforts to build a powerful, diverse, women-led future where we are truly equal. #ambitionsuitsyou

“Argent and Supermajority share a mission of advancing gender equity and building a women-led future,” Sali Christeson, the founder and CEO of Argent, tells Refinery29. “In this high-stakes moment for women, we wanted to lean into our collective femininity and celebrate our ambition — owning pink as our gender identifier, but leveraging a bold shade that communicates both playfulness and power.” According to Christeson, women have previously wrestled with two choices: To embrace their femininity or blend in with their male counterparts.
“We’re evolving beyond that thinking, now embracing that fashion serves as a powerful tool for women to establish a strong presence and let it be known that we are to be seen and heard in rooms where decisions are being made,” she says. “The pieces that you wear have the ability to carry a meaning far beyond the label, serving as a vehicle of expression for who you are, what you represent, and what you want heard.” With this in mind, celebrities are using the collection to make more than a fashion statement — by sending a political message. “We’re building a powerful, diverse, women-led future where justice is real,” wrote Kerry Washington in a caption alongside photos of her in her Argent x Supermajority suit.
Join in supporting Supermajority’s mission of helping women make their voices heard by shopping the Election Collection, as well as merch from Supermajority, below.
At Refinery29, we’re here to help you navigate this overwhelming world of stuff. All of our market picks are independently selected and curated by the editorial team. If you buy something we link to on our site, Refinery29 may earn commission.
shop 4 products 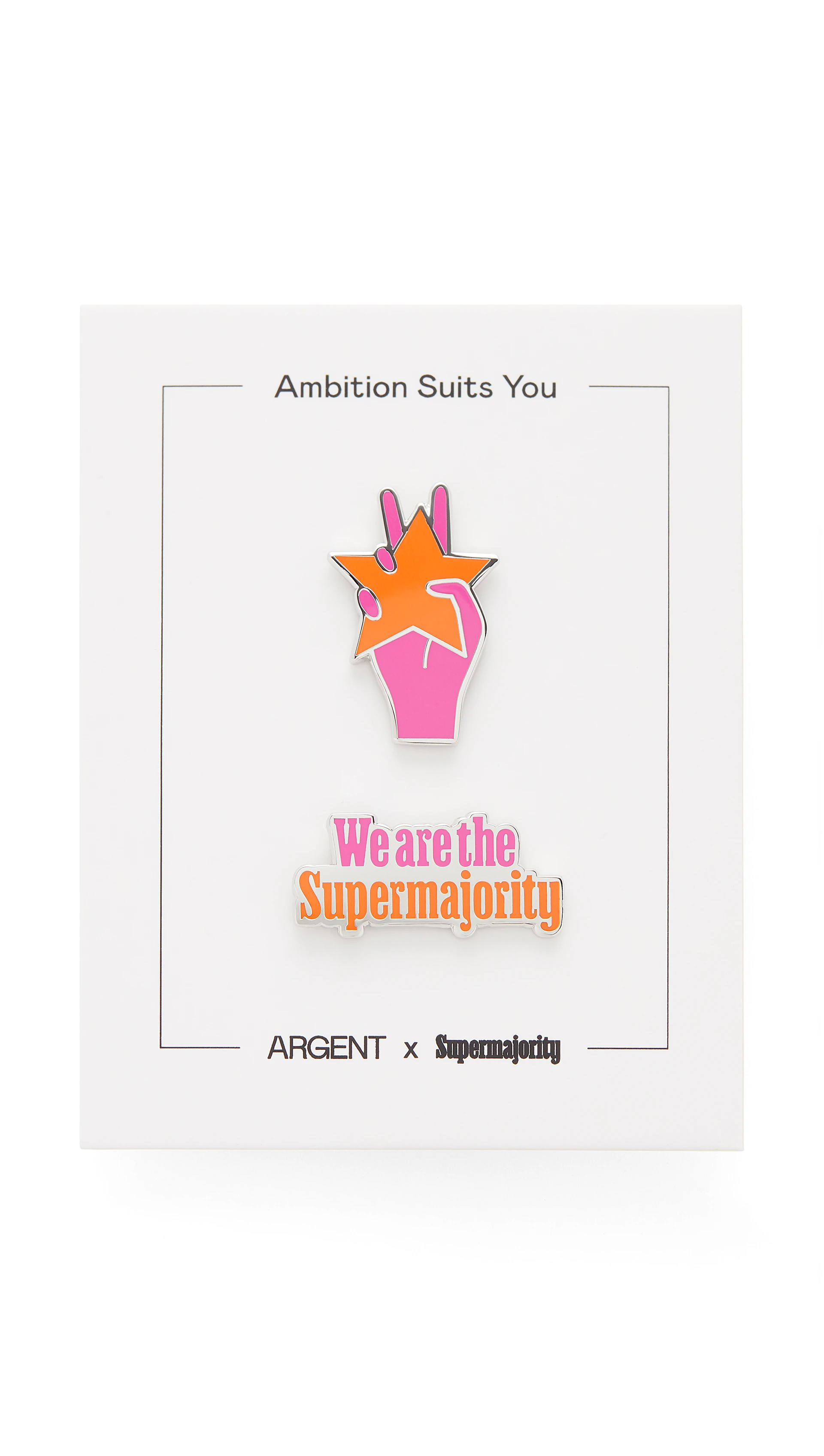 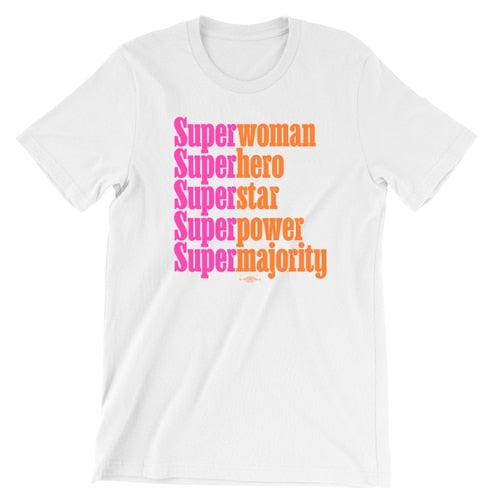 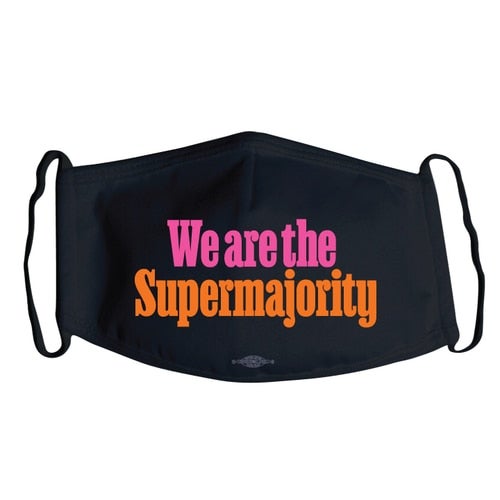 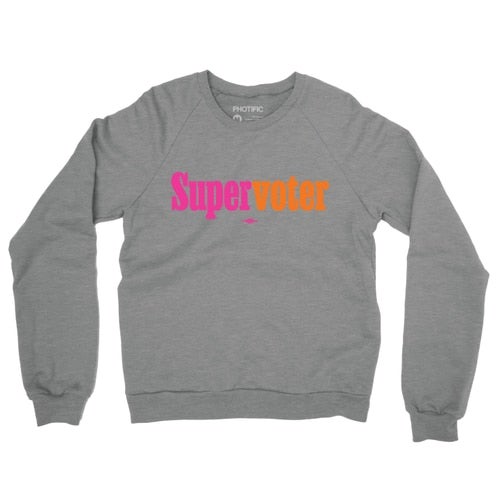 Supermajority
Super Voter Crewneck Sweatshirt
$48.00
Supermajority
Fashion
Bedazzled Clothing Is This Summer’s Most Party-Ready Trend
In time for warm weather, fashion has signaled that it’s time to bare it all, with the most popular trends of the summer ranging from party dresses to mi
by Frances Solá-Sant...
Style
Brides Are Buying Secondhand Wedding Dresses. Here’s Where To Fin...
Roughly two million people get married in the U.S. every year, an occasion for which, prior to the pandemic, a good chunk of brides bought a new wedding dr
by Eliza Huber
Style
Chunky Rings Are A Must-Have Summer Accessory, Thanks To TikTok
If you’re on TikTok, you’ve likely seen the colorful, plastic rings that line the fingers of users across the platform. Playful and somewhat child-like
by Eliza Huber
Advertisement
Fashion
How The White Tank Top Became 2022’s Biggest Fashion Statement
The concept of a capsule closet — a wardrobe made up of a versatile collection of basics like black T-shirts, white button-downs, and little black dresse
by Frances Solá-Sant...
Fashion
These Are Spring’s Biggest Wardrobe Essentials, According T...
Every season, a new selection of soon-to-be bestsellers hits our favorite fashion retailers. With so many spring 2022 products and trends to keep up with,
by Irina Grechko
Fashion
These Fashion Trends Are Defining 2022 — Here’s How To Shop...
by Laura Lajiness Ka...
Fashion
So How Is It Really? Wearing The Micro Mini Skirt Trend IRL
Thanks to brands like Miaou and Miu Miu, the micro mini skirt is one of the defining trends of 2022. Ever since the Y2K trend appeared on the spring 2022 r
by Frances Solá-Sant...
Color Blocking
A Case For Wearing Red & Pink, The Color Combo Everyone Loves To ...
According to antiquated fashion rules none of us should subscribe to, there are some colors combinations that should never be worn together. Navy blue and
by Frances Solá-Sant...
Fashion
Harnesses Are Trending — Here’s What It’s Like Wearing One
Welcome to Refinery29’s So, How Is It Really? where we take a look at all of the topics that have the internet talking. In studying them up close, we ans
by Frances Solá-Sant...
Fashion
10 Spring Fashion Trends To Shop Now
If the trees are blossoming near you, it means it’s now time to start dressing in spring’s top trends. As it tends to be the case with warmer-w
by Laura Lajiness Ka...
Fashion
13 Opera Gloves That Exude Main Character Energy
by Nadia Ebrahim
Fashion
Peeking Boxers Are Coming For Your Low-Rise Jeans
Last year, as the fashion world time-traveled to the early 2000s, visible thongs, also known as whale tails, started popping up everywhere from street styl
by Frances Solá-Sant...
Advertisement
Advertisement
Discover
R29 Stories & News
Watch
R29 Original Series & Films
Shop
R29's Most Wanted