Skip navigation!
Story from Style
Photo: Gotham/GC Images.
On Saturday, while grabbing to-go coffees in New York City, Hailey Bieber was spotted wearing none other than fall’s most coveted piece of outerwear: the margarine yellow, fringe coat from Daniel Lee’s fall ‘20 Bottega Veneta collection — a favorite during the season’s Milan shows. The floor-length coat, which features braided, shearling fringe and oversized lapels, has graced the glossy pages of just about every magazine on newsstands since its debut last winter, including Harper's BAZAAR’s September cover starring Rihanna. But, until Bieber’s morning stroll this weekend, it had yet to be seen in the wild.
Advertisement
For the occasion, the model chose to balance out the luxe outerwear — the coat retails for around $9,450 — with a yellow Coors baseball cap, a matching yellow cropped sweater from Jonathan Simkhai, Air Force 1s, and a pair of her signature baggy, low-rise jeans. She topped off the look with gold-rimmed sunglasses, chunky hoop earrings, and a black, disposable face mask.
Photo: Gotham/GC Images.
In contrast, for the Rihanna shoot, the coat was styled with a Bottega Veneta long-sleeved, curve-hugging dress with cut-out shoulders and a fringe hem. The image showed the singer-turned-fashion-designer twirling around in the sun, her coat’s fringe floating behind her. Another shot, taken from above, saw Rihanna dragging the nearly $10k coat on the ground while walking on an abandoned highway. (We would never!)
During the runway show in Milan eight months ago, Lee styled the coat that caught everyone's attention in two ways: with matching butterscotch sunglasses and a tonal shirt-and-trousers combination, and with a cream ribbed dress, thigh-high white boots, and a matching red cross-body bag. (For anyone looking for a more low-key alternative to the yellow outerwear, the silhouette also comes in chocolate brown.) Unfortunately for us, no matter how laissez-faire Bieber made the coat out to be this weekend — or how badly Rihanna’s cover tempted us to splurge — this celebrity favorite is hardly accessible. But, given that fringe is one of the most talked-about trends of the season, there are still plenty of ways to garner both of the stars’ stamps of approval without breaking the bank.
Advertisement
Below, find a selection of other fringe outerwear.
At Refinery29, we’re here to help you navigate this overwhelming world of stuff. All of our market picks are independently selected and curated by the editorial team. If you buy something we link to on our site, Refinery29 may earn commission.
shop 6 products 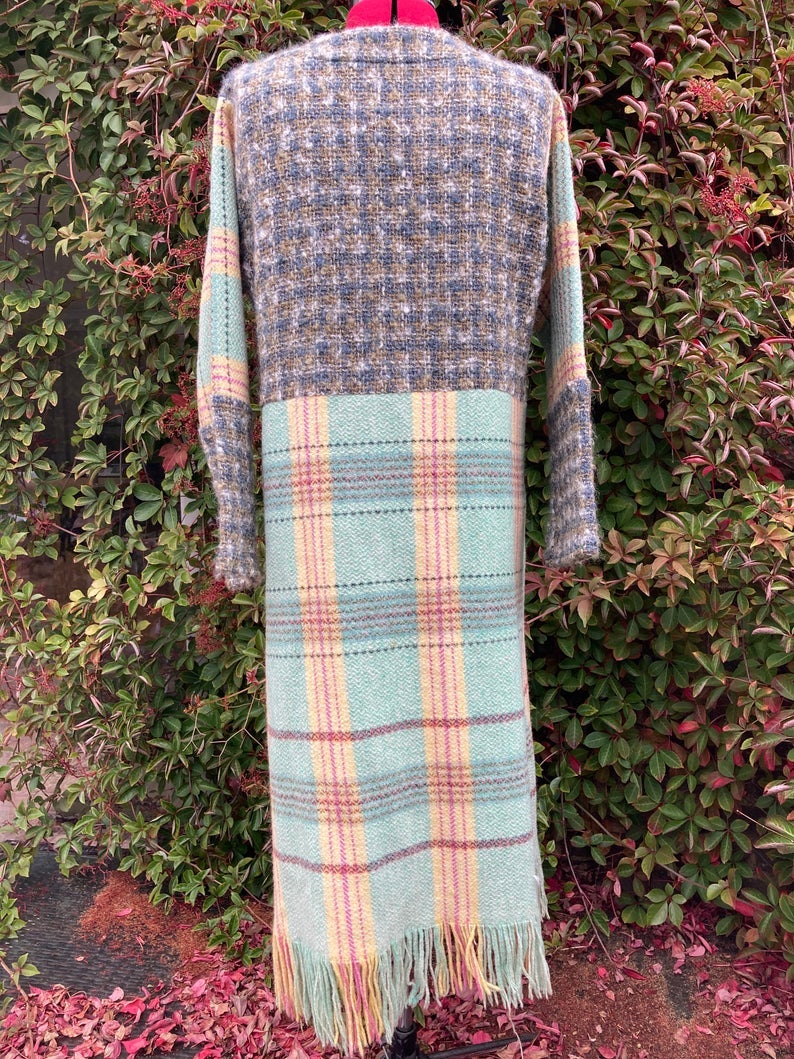 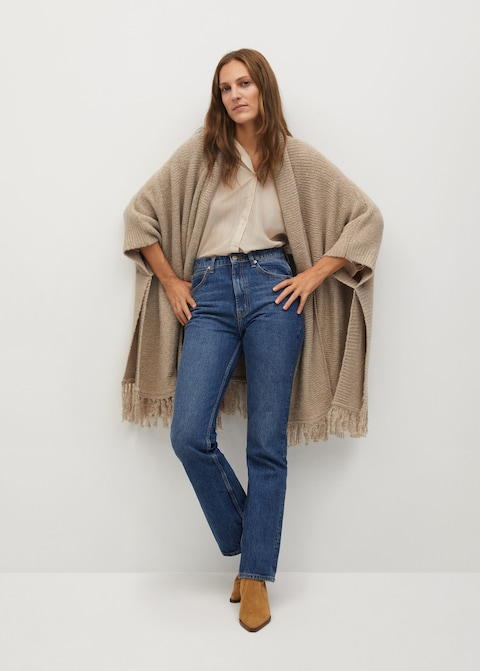 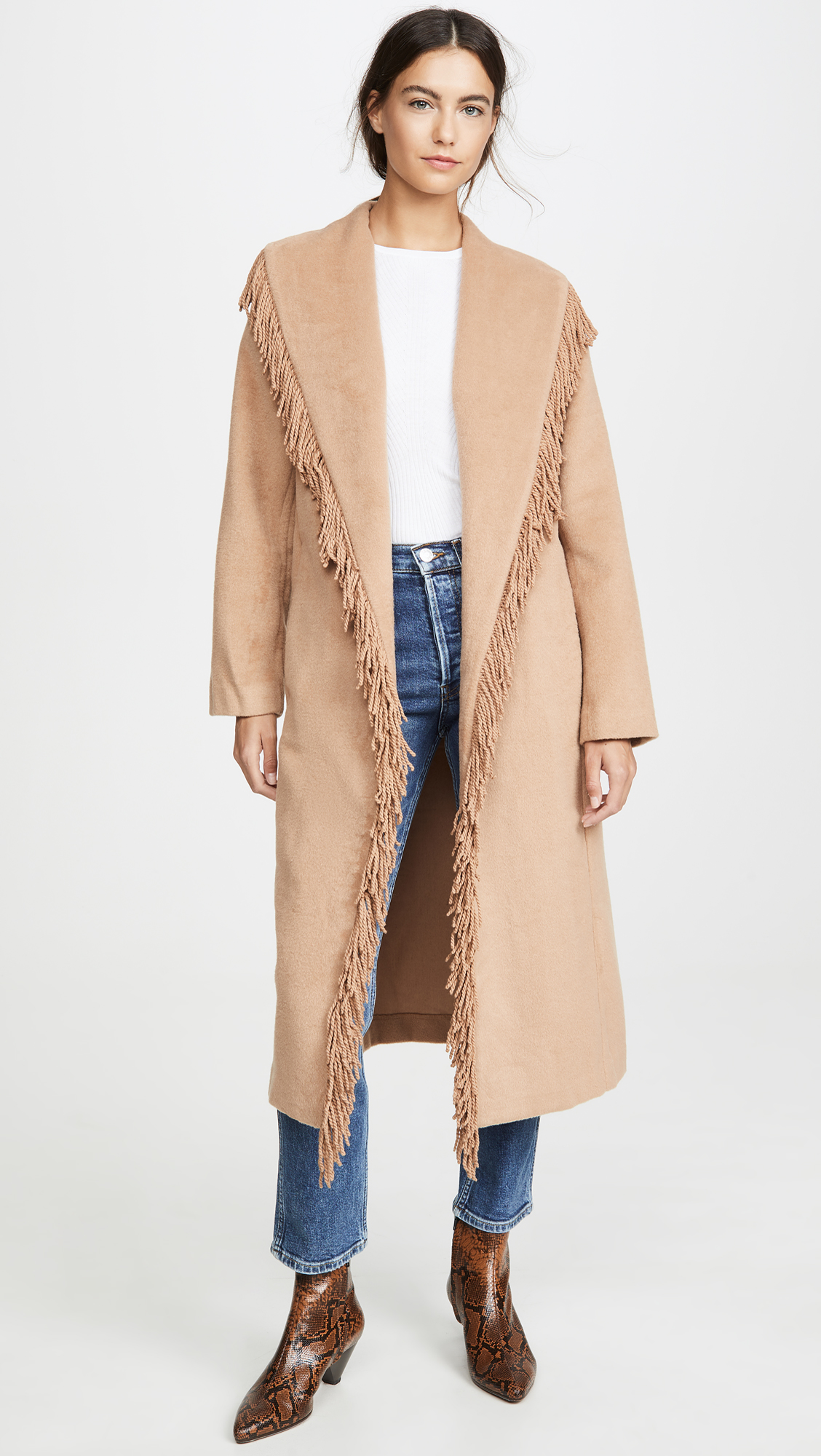 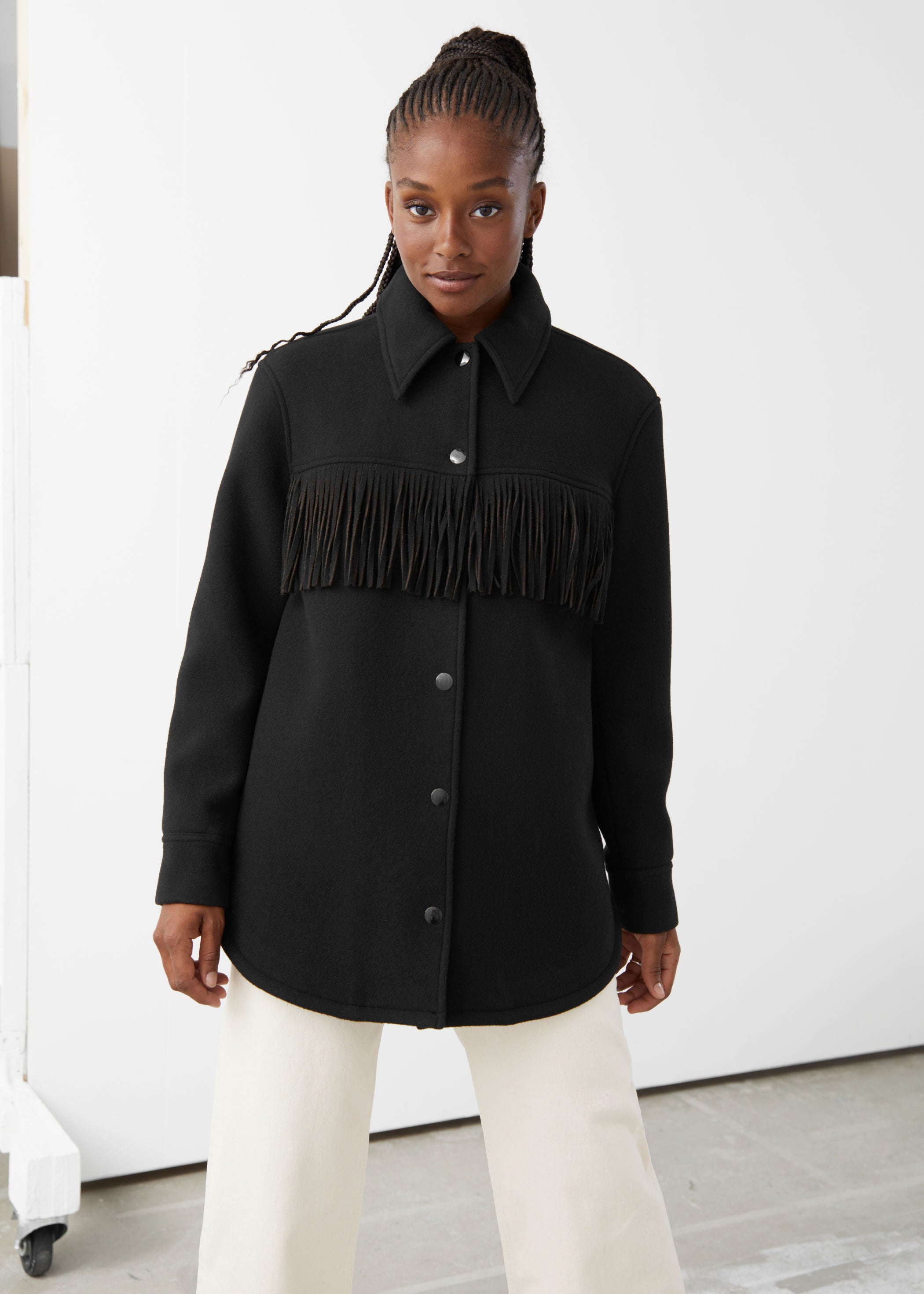 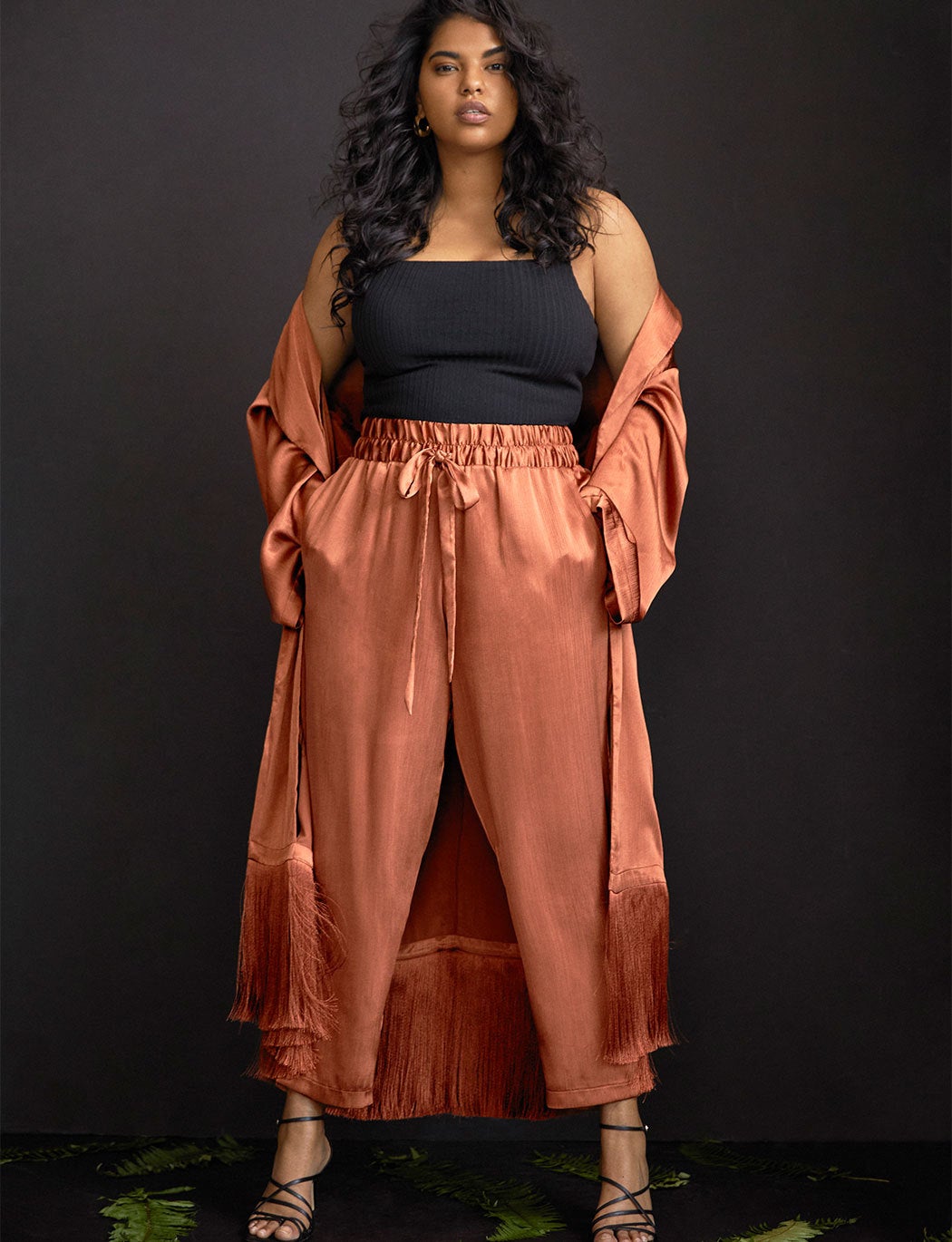 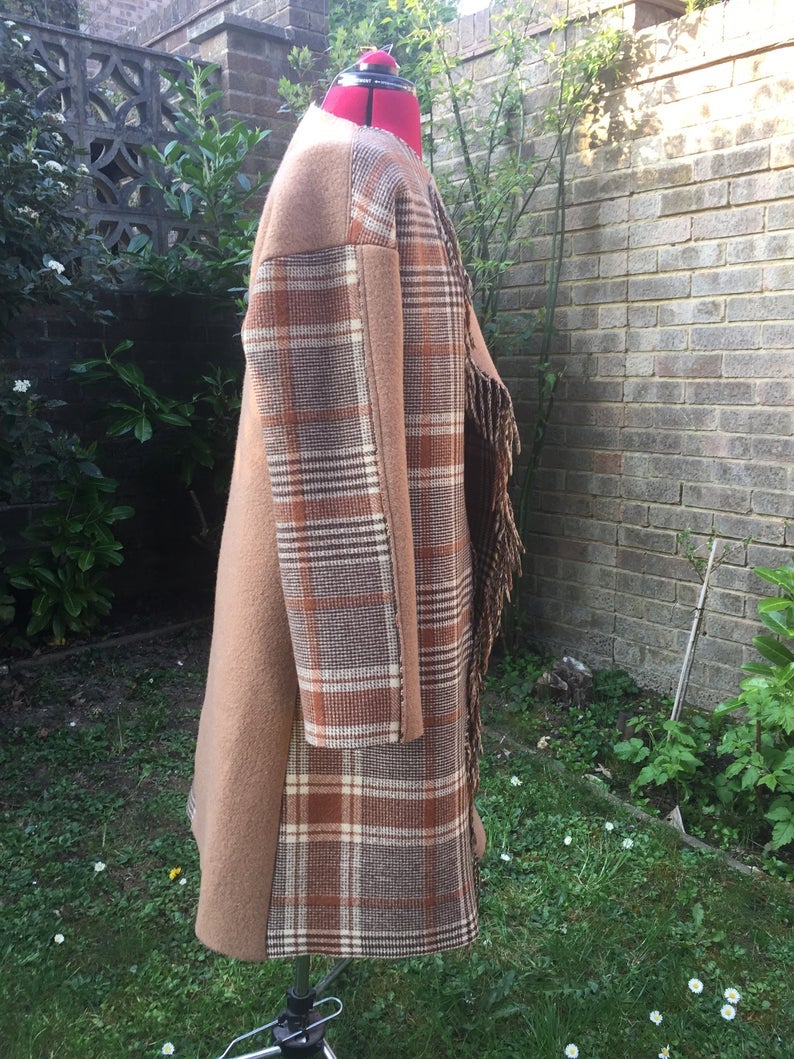 PrettyThingsByDora
Beautiful Vintage Wool Blanket Coat
$201.97
Etsy
Unbothered
WNBA Star Skylar Diggins-Smith’s Puma Collection Is Versatile On ...
Skylar Diggins-Smith wants you to know that she’s a hooper with style. On August 2, the six-time all-star and Phoenix Mercury Guard released her first-ev
by Venesa Coger
Unbothered
Want To Grow Your Following On Instagram? Micaéla Verrelien Share...
The misconception about being a successful influencer is that you have to tie yourself down to one specific niche in order to gain popularity. But thatR
by Venesa Coger
Fashion
Tinx Is In Her “Rich Mom Athleisure” Fashion Era — But Don’t Expe...
“Rich Moms love a monochrome moment, like a linen pant and a nice linen blouse. They love a bathing suit with a sarong over it and some amazing statement
by Irina Grechko
Advertisement
Unbothered
Olivia Joan Went Viral Highlighting Her Grandmother’s Fabulous Wa...
When it comes to sharing fashion content across multiple social media platforms, clothing hauls are a crowd favorite. Usually, it’s a person talking abou
by Venesa Coger
Unbothered
Rihanna Tells Us Why The IRL Savage X Fenty Experience “Wil...
When news broke that Rihanna had plans to open physical Savage X Fenty stores, many wondered what the shopping experience would be like. Its e-commerce sit
by Venesa Coger
Somos Latinx
In Celebration of Tatyana Ali’s ‘90s Fashion Looks
When The Fresh Prince of Bel-Air hit television screens on September 10, 1990, young viewers weren’t just howling with laughter at the smart humor of the
by Naydeline Mejia
Fashion
Kahlana Barfield Brown On Shopping Secondhand & Why Jeans Go With...
Style and beauty expert Kahlana Barfield Brown is an avid thrifter. If you follow her on Instagram, you know that her styling videos and fashion photos oft
by Venesa Coger
Celebrity Style
You Can Now Shop Carrie Bradshaw’s Fendi Baguette From A...
Update: Fendi has now re-issued Carrie Bradshaw’s famous purple, sequined Baguette bag, following the release of And Just Like That… on HBO Max
by Frances Solá-Sant...
Unbothered
What Black Creators Can Learn From Signed, Blake
S
by Venesa Coger
Style
This Reformation Dress Sold Out After Taylor Swift’s TikTok Debut...
Taylor Swift made her TikTok debut on Monday in a big way. First, she announced that Red (Taylor’s Version), the re-released edition of her 2012 album Re
by Eliza Huber
Style
Zoë Kravitz Wore The Perfect Summer Dress — & Yes, It’s Still Ava...
If you spent the entire weekend thinking about Zoë Kravitz and Channing Tatum’s rumored relationship after the two were spotted sipping iced coffees tog
by Eliza Huber
Beyonce
Beyoncé Channeled Audrey Hepburn In A 128-Carat Diamond Necklace
One of Breakfast at Tiffany’s most memorable scenes features Holly Golightly (Audrey Hepburn) singing Henry Mancini’s “Moon River” while strumming
by Frances Solá-Sant...
Advertisement
Advertisement
Discover
R29 Stories & News
Watch
R29 Original Series & Films
Shop
R29's Most Wanted