Skip navigation!
Story from Most Wanted
It only took a few swipes of the wand through my lashes to be totally smitten with Kosas' new mascara launch — and I test a lot of beauty goods. "It’s been a long time coming," Kosas' founder Sheena Yaitanes told Refinery29 of the brand's latest product drop, The Big Clean. "When I was pregnant with my daughter, I became hyper-conscious of the products that I was putting on my face and body, including mascara." The more she researched, the more she realized that ingredients like plastics and acrylates (formaldehyde-releasing agents) were finding its way in mascara formulas. "I became a person who didn’t wear mascara until I could develop my own clean version," she explains. Enter, Kosas' first-ever mascara — which toes the line between a lash serum and a makeup product with ingredients like castor oil, vitamin B5, and peptides at potent concentrations to show your lashes some love. "It took us 104 iterations to get the formula right," Yaitanes tells us. (That's a lot of mascara.) I'll admit, I lucked out in the lash department; mine are naturally long, black, and curled at the base. It's for that reason that when it comes to mascaras, I love defining, lengthening ones that I can build up for dramatic volume as needed. So, scroll on to see for yourself exactly how Kosas' newest addition stacks swipes up.
Advertisement

If we're being totally honest, I was already hooked based on the packaging alone; an ombré red tube so bold and fun, it instantly brightened up my desk. In addition to its super-chic packaging, the wand itself also happened to be excellent; a subtle arch shape made it easy to lift my lashes and give them some curl with a side of mile-long length and fluffiness. Now, onto the formula: an inky black that didn't flake or make my lashes feel dry — and, best yet, it was pretty close to smudge-proof for a formula that is not labeled water-resistant. If it's hot and/or humid outside, I usually get some mascara transfer by the end of the day (which is *a* look, but not *my* look) — but this one stayed put until I removed it with my oil cleanser.
Photo: Courtesy of Karina Hoshikawa
Left: Me, no mascara. Right: With two coats of The Big Clean!

As someone who tends to live by drugstore mascaras (L'Oréal Lash Paradise is a forever fave), I understand that $26 is a lot to drop on a mascara. However, as someone who also takes obsessive care of her lashes (I don't wear mascara daily, and if I do, I treat 'em to a tiny bit of argan oil before bed), the actually-good-for-your-lashes aspect of this product really appeals to me! Plus, lash serums are pretty expensive, TBH. My advice: If you're not a serious mascara stan, wait for the brand to drop the mini version, which retails for a more palatable $13. 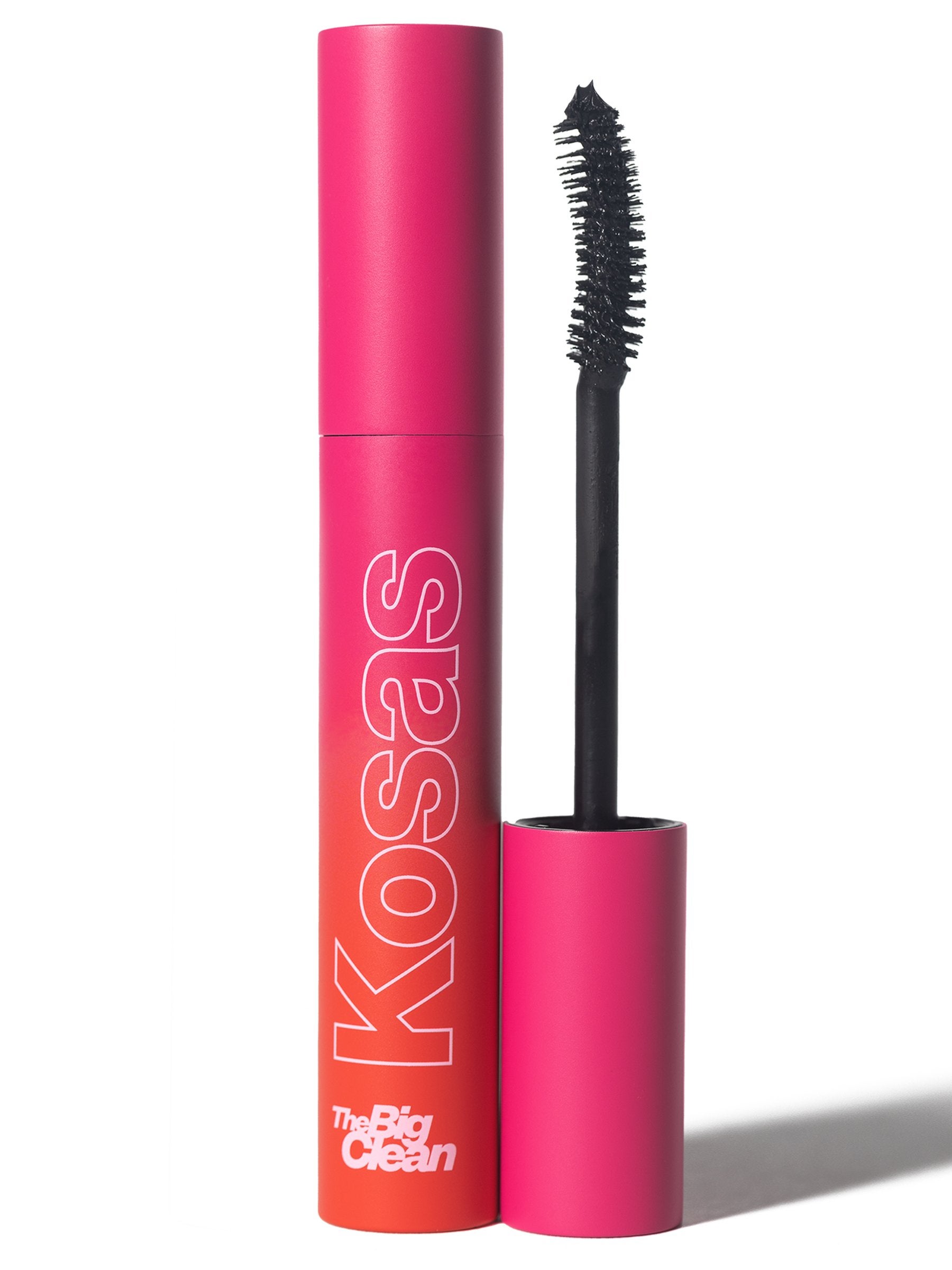 Kosas
The Big Clean Mascara
$26.00
Kosas
At Refinery29, we’re here to help you navigate this overwhelming world of stuff. All of our market picks are independently selected and curated by the editorial team. If you buy something we link to on our site, Refinery29 may earn commission.
Dedicated Feature
Beauty School: Non-Binary Makeup
by Hilary Shepherd
Unbothered
Why ‘UK Black Girl Makeup’ Is The New Face Of Luxury
There’s a general consensus across the beauty world of late: Black women in the UK have mastered the “perfect beat” —  a specific brand of pol
by L'Oréal Blackett
Beauty
Can You Be Both Luminous And Matte? Huda Kattan Shows Us How
Beauty lovers everywhere, it’s time to celebrate! Today, beloved beauty brand, queen of all things color and quality, Huda Beauty, has released its bigge
by Amanda Mitchell
Advertisement
Beauty
These Red Lipsticks Work For Every Skin Tone — Here’s The Proof
There is nothing more classic than a red lip, but one would argue that there is nothing more difficult than finding the right shade to match your skin tone
by Sara Tan
Most Wanted
Does This TikTok-Famous Primer Live Up To The Hype? An Investigat...
There are a lot of really good, really affordable beauty products out there. However, not all of them can say they boast over 27,000 reviews online, but e.
by Karina Hoshikawa
Beauty
I Tried TikTok’s 3-Step ‘Celeb Skin’ Hack
Bright, plump, and radiant in all the right places, red-carpet skin is the real deal. From Simone Ashley to Letitia Wright, celebr
by Jacqueline Kilikita
Dedicated Feature
Uniliner Is More Than Just A Makeup Trend. It’s A Form Of S...
For so long, the beauty industry has only catered to one very specific segment of the population (straight, cisgender, white, and female). But now, in addi
by Hilary Shepherd
Beauty
Donni Davy’s Winged Eyeliner Trick Is A Game-Changer
Euphoria‘s lead makeup designer Donni Davy is an artist, first and foremost. It wasn’t until the show became synonymous with a specific beauty
by Megan Decker
Beauty
An Excellent Under-$20 Lipstick That’s Compostable (Gasp)
Beauty products can generate a ton of waste with all the plastic packaging they’re encapsulated in. Furthermore, there are plenty of beauty brands th
by Jinnie Lee
Most Wanted
This K-Pop Beauty Collab Just Launched At Ulta Beauty — & It̵...
Dear ARMY, you probably already know this buuuut BTS-adjacent brand BT21 just launched a makeup and skin-care collab at Ulta Beauty — and it’s not
by Mercedes Viera
Most Wanted
I Wore A Full Face Of Merit Beauty — & These Are The 6 Products W...
If your algorithm is anything like mine, you can’t fire up Instagram without being served an ad for an impeccably designed clean beauty brand —&nbs
by Karina Hoshikawa
Beauty
These Lipsticks With Affirmations Are Exactly What The World Needs
Is there anything quite as nice as a good affirmation? It’s an unsurprising fact that I am the kind of gal who has affirmations written on Post-Its on my
by Amanda Mitchell
Advertisement
Advertisement
Discover
R29 Stories & News
Watch
R29 Original Series & Films
Shop
R29's Most Wanted