Skip navigation!
Story from Beauty
Uoma Beauty’s first-ever campaign video is an outlier among makeup ads from the very start, as it begins not with a close-up of a celebrity spokesmodel’s flawless skin or a slow pan over a field of flowers, but with the voice of civil-rights champion Malcolm X. “Who taught you to hate yourself, from the top of your head to the soles of your feet?” the late activist chants, before his words fade into a contagious Afrobeat while women of all complexions dance in vibrant makeup and colorful, airy garments. A voiceover states, “Beauty comes in every color — and we intend to wear them all.”
Advertisement
In a sea of cookie-cutter beauty campaigns, where models conform to unattainable standards and brands only claim to be bold, Uoma’s — full of past and present depictions of African culture — stands out. For the brand’s founder, Sharon Chuter, being innovative comes easy. "Uoma was born out of my personal experiences and frustrations in the beauty industry," Chuter tells Refinery29. "I am a proud, Black, Nigerian woman, and I've always felt excluded from the beauty conversation."
Photo Courtesy Uoma Beauty
Chuter grew up in Nigeria, where she encountered unrealistic beauty ideals from an early age. "Two of the biggest beauty systems in Nigeria are the preference on lighter skin and straight hair," she says. "Even in a country with a majority Black population, you're still expected to exist by Western standards of beauty." These expectations have trickled down to the beauty aisle where, Chuter says, finding suitable makeup is an ongoing problem — even in African countries. “If you were to go into a beauty store in South Africa today, it would still be difficult to find dark shades,” she says.
After over a decade working in the beauty industry internationally for mega-brands like Benefit Cosmetics, Chuter decided there was room to better cater to Black women and tell their stories. So she created Uoma, which translates to “beautiful” in Igbo, the principal language spoken by the Igbo people of southeastern Nigeria. "Many brands try to sell to Black women, but do not know the Black woman," Chuter says. That critical oversight is why infusing her African culture into every detail of her brand was so important. “As a brand, Uoma celebrates and is conscious of our Afro-heritage. We are a brand by Black people for the world,” she says.
Advertisement
“

"It's easy to drop a million shades of foundation, but we wanted to come in and drop some truth. You can have a wide range of products, but do you understand the person behind the foundation?"

Sharon Chuter, Founder & CEO Of Uoma Beauty
”
From the beginning, Chuter’s heritage served as Uoma’s main ingredient. She outfitted eyeshadow palettes in Afro-inspired art, and named shades after African goddesses, like Yemoja and Oya. She also released the Badass Icon lipstick collection, featuring 16 hues named after iconic Black women. Uoma’s most recent launch, the Bro-Fro collection, features four arch-defining products inspired by the Soul Train and disco culture of the 1970s. Uoma’s first campaign video was shot in Lagos, Nigeria, an intentional decision for Chuter. “Our first brand story is the story of Lagos, and I had to start there because Nigeria is my home,” she says. “It’s at the core of who I am, and the single way I am most true to myself.”
Launching one of the most successful new brands at Ulta hasn’t been without challenges for Chuter. "There are a lot of things women, especially Black women, are not taught, and raising capital is one of them," she says. "When you're raising money in the beauty world, most investors are Caucasian men — they don't wear the lipstick." Raising the finances that made Uoma's launch a reality took a lot of convincing in boardrooms, which Chuter says paints a larger picture of what it's like to be a Black business owner. "You always have to deal with conscious and unconscious bias as a Black woman,” she says. “I have a responsibility to be firm and strong, to make sure that the next woman who comes after me doesn’t feel left out of the conversation. It's tough, but I don't let it discourage me."
Advertisement
Chuter’s hard work from her seat at the table has paid off in spades. Since launching in April 2019, Uoma’s Say What?! foundation has become its #1 best-selling item, accounting for over 50% of sales to date. Uoma also made its Fashion Week debut as the key beauty brand used for Laquan Smith’s New York City presentation. The brand entered the market at a time when a long-awaited new standard for the complexion category was emerging thanks to industry voices like Rihanna and Jackie Aina. Some brands upped the ante by building upon existing foundation ranges; others entered the category with up to 100 shades right out of the gate. But even with the influx and expansion of the beauty aisle, Uoma managed to break through the noise.
Photo Courtesy Uoma Beauty
"One of our main principles is celebrating individuality, and that is what drove the way we formulated our foundation," Chuter says. "Different skin groups have different concerns and needs, and we wanted to create a product with those concerns in mind." So, Chuter and her team worked with labs to dig deep into the science of the Fitzpatrick Scale, a numerical scale that classifies skin tones, to determine what the most common skin concerns are among various color groups. They came up with six categories that target redness, acne, sensitivity, hyperpigmentation, anti-aging, and dryness, respectively. "Our foundation is a reflection of our philosophy," Chuter says. "We shouldn't ignore what makes us different for the sake of looking cool." 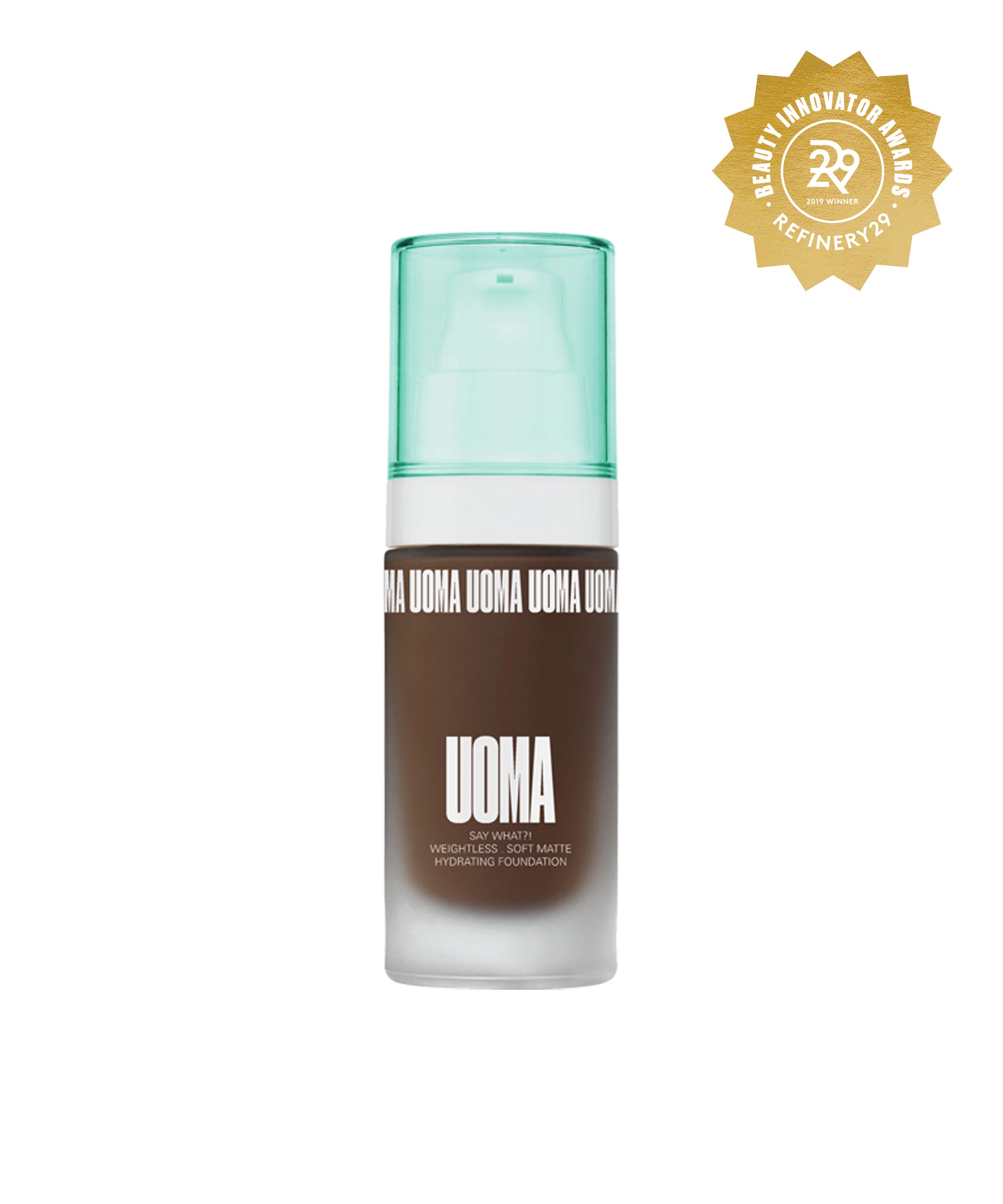 UOMA Beauty
Uoma Beauty Say What?! Foundation
$39.00
Ulta Beauty
Looking cool is easy in today’s climate, but being cool and staying true to yourself is where the authentic excel — and it’s where Uoma wins. "Diversity and inclusivity have become overused buzzwords these days," she says. "It's easy to drop a million shades of foundation, but we wanted to come in and drop some truth. You can have a wide range of products, but do you understand the person behind the foundation?"
Chuter’s goal of using diversity as less of a token and more of an opportunity to create representation in a crowded space is also why we unanimously awarded her Refinery29's Beauty Innovator Of The Year. "It's so easy to build a brand that is driven by capitalizing on trends for dollars," Chuter says. "But Uoma isn't in the business of that. We are trying to redefine inclusivity. Being inclusive is about being true to yourself and respecting what's different about others — not about shoving your hands in their pockets."
At Refinery29, we’re here to help you navigate this overwhelming world of stuff. All of our market picks are independently selected and curated by the editorial team. If you buy something we link to on our site, Refinery29 may earn commission. Check out the rest of the 2019 Beauty Innovator Award winners.
Advertisement
Beauty
FYI: Jake Gyllenhaal’s House Smells Like Pasta Pomodoro
To say I was amped to meet Jake Gyllenhaal would be an understatement and leave out the fact that I had teary eyes when I FaceTimed my friend to tell her a
by Megan Decker
Celebrity Beauty
R.E.M. Enters A “Fun, New Chapter” At Ulta Beauty
I’m in a Zoom hold, waiting for the meeting host — Ariana Grande‘s PR team — to let me in to a Zoom room with the talent herself. Once I he
by Megan Decker
Celebrity Beauty
Tefi Talks Liquid Nose Jobs & “Jellyfishing” Her Way ...
My favorite thing about Tefi, or Estefanía Vanegas Pessoa, is that she’s not trying to please anyone. Not her Colombian mother. Not her bosses at In
by Megan Decker
Advertisement
Beauty
A Minute-By-Minute Breakdown Of Drag Transformation
Miss Fame, or Kurtis Dam-Mikkelsen, is a gender non-conforming drag and makeup artist, model, and one of the biggest names in fashion and beauty. Previousl
by Amanda Mitchell
Celebrity Beauty
Angus Cloud Smells Like A Cocktail Party
Last week, a five minute meeting looming on my Google Calendar felt really big. Because of the short window of time on the reminder, the blue bubble was te
by Megan Decker
Beauty
Busy Philipps Embraces A Grunge Look & $35 Retinol
Busy Philipps‘s performance as Kim Kelly on Freaks and Geeks defined, for an entire generation, the trope of the ride-or-die best friend. In the late
by Amanda Mitchell
Unbothered
We Tried It: Unbothered Reviews Marsai Martin’s Press-On Nails
by Venesa Coger
Beauty
Claws Was Always A Show About Beauty And Vengeance
On its face, Claws has always been a show that a viewer could enjoy on mute. It’s a campy, noir ensemble show that never strayed away from being Too Much
by Amanda Mitchell
Celebrity Beauty
Rihanna’s Pregnancy Beauty Routine Is Surprisingly Simple
When you hear people talking about those women who can do it all, I’m fairly certain they’re all actually referring to Rihanna. The 33-year-old
by Sara Tan
Beauty
I’m A Country Musician & These Are All The Products I Use I...
Country music singer Yola Carter explained that a Beauty Diary for a touring artist can be a bit of a daunting task, given that she spends a lot of her tim
by Amanda Mitchell
Beauty
Megan Rapinoe Can’t Wait To Go Gray & Chat NFTs
When I say Megan Rapinoe is everything, I mean it. The soccer star and two-time World Cup Champion for the U.S. Women’s National Soccer team blessed
by Amanda Mitchell
Beauty
Peyton List On Wearing Makeup As “A Social Experiment”
Makeup plays an integral part in many young people’s lives, especially when it comes to developing their sense of self. Some people like to wear a lo
by Megan Decker
Advertisement
Advertisement
Discover
R29 Stories & News
Watch
R29 Original Series & Films
Shop
R29's Most Wanted