Skip navigation!
Story from Celebrity Beauty
Photo: Dia Dipasupil/Getty Images.
Is there anyone cooler than Zoë Kravitz? Really, think about it. As an actress, she's long gravitated towards playing underestimated, strong women, including Bonnie Carlson on Big Little Lies and Toast in Mad Max: Fury Road.
In real life, she's openly passionate about women's rights, and always surprising us with her look, from pixie cuts to braids and more than 50 dainty tattoos. The woman even wore a see-through crystal dress over bike shorts to her wedding rehearsal dinner in Paris — a boss move if we've ever seen one.
This month, Kravitz is finally able to direct all that cool-girl energy to the historically stuffy beauty industry, teaming up with YSL Beauté to launch a collection of six lipsticks that go beyond just pretty tubes.
Advertisement
"Makeup in general can be seen as warpaint," Kravitz, curled up in a green cardigan while lounging in a suite in New York City's The Plaza Hotel, tells me. "We have to go out into the world and try to feel ourselves and sometimes we need a little boost to feel sexy and confident and strong. Lipstick is a beautifully strong statement." 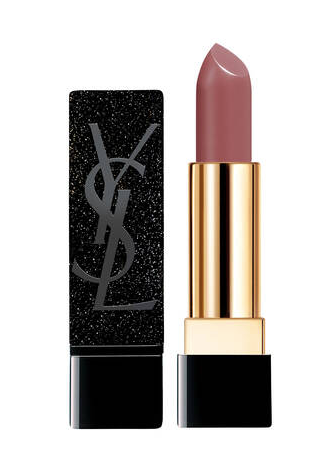 YSL
Rouge Pur Couture Lipstick - Arlene's Nude
$38.00
YSL
Unlike many celebrity launches, this is not a case of Kravitz slapping her name onto six tubes of the brand's Rouge Pur Couture formula. She had a hand in everything, from the packaging to the colors and shade names. To differentiate her lipstick tubes from the general collection, she took inspiration from her favorite matte black Saint Laurent purse, the Niki, for the matte logo. Then, she splashed glitter over the case as an ode to a bottle of Black Opium, the fragrance she was named the face of last year. "I was trying to find inspiration in things that I look at on a daily basis," she says.
Then there was the question of what colors Kravitz's lipsticks should be. As someone who wears, and pulls off, pretty much anything, she ultimately decided to stick to the basics. "I wanted to start with a simple group of nudes and reds to be your everyday collection," Kravitz says. "When I go for a lipstick, it’s usually something in that category unless I'm feeling very adventurous."
To make sure the reds and nudes were truly universal, she tested them on her friends and family, and even named some of the shades after those she admires most. There's Arlene’s Nude, a mauve shade that's named after her grandmother, and Maris' Nude, a warm brown that honors her godmother, actress Marisa Tomei. Honey's Nude, a light pink, is taken from "Honey Brown," the nickname for her other godmother, actress and singer Cree Summer.
Advertisement
Photo: Courtesy of YSL
Kravitz's stepbrother, Nakoa-Wolf, gets his own Wolf's Red lipstick, and the standout shade of the collection, an orange-red called Scout's Red, is named after her dog, Scout, who always wears a red bandana. Of course, her mother, Lisa Bonet, makes an appearance, with her nickname "Lale" appearing on an oxblood red tube. To Kravitz, her mother played the biggest role in her approach to makeup, so honoring her in the collection was a given. "My mom definitely taught me about beauty coming from the inside first," Kravitz says. "It’s really hard to cover up an unhappy body, physically, emotionally, all of it."
Now Kravitz hopes that beauty ethos can be passed on to the people who wear her lipsticks, too. "I don’t want to use makeup to cover myself up," Kravitz says. "I want to use it to enhance the things that I love about myself. I hope other people are encouraged to do the same."
At Refinery29, we’re here to help you navigate this overwhelming world of stuff. All of our market picks are independently selected and curated by the editorial team. If you buy something we link to on our site, Refinery29 may earn commission.
Beauty
Mark Tuan Is Putting Mark Tuan First
I met Mark Tuan on a Zoom call on a Tuesday afternoon in late July. He’s wearing a black bucket hat and white tee while sitting on a couch in his family
by Lexy White
Beauty
From Malibu To Williamsburg, Inside Kaia Gerber’s Jetsetter...
After spending a Sunday by the pool at her parents house in Malibu, Kaia Gerber slides her Five-Minute Journal in a pre-packed carryon and catches a red ey
by Megan Decker
Unbothered
Tiara Willis & Shaniah Bell Share Tips On Building Community Thro...
There were only two things that got me through the 2020-2021 pandemic lockdowns:  incredible music releases (like Chloe x Halle and Kehlani) and the g
by Venesa Coger
Advertisement
Beauty
FYI: Jake Gyllenhaal’s House Smells Like Pasta Pomodoro
To say I was amped to meet Jake Gyllenhaal would be an understatement and leave out the fact that I had teary eyes when I FaceTimed my friend to tell her a
by Megan Decker
Celebrity Beauty
R.E.M. Enters A “Fun, New Chapter” At Ulta Beauty
I’m in a Zoom hold, waiting for the meeting host — Ariana Grande‘s PR team — to let me in to a Zoom room with the talent herself. Once I he
by Megan Decker
Celebrity Beauty
Tefi Talks Liquid Nose Jobs & “Jellyfishing” Her Way ...
My favorite thing about Tefi, or Estefanía Vanegas Pessoa, is that she’s not trying to please anyone. Not her Colombian mother. Not her bosses at In
by Megan Decker
Beauty
A Minute-By-Minute Breakdown Of Drag Transformation
Miss Fame, or Kurtis Dam-Mikkelsen, is a gender non-conforming drag and makeup artist, model, and one of the biggest names in fashion and beauty. Previousl
by Amanda Mitchell
Celebrity Beauty
Angus Cloud Smells Like A Cocktail Party
Last week, a five minute meeting looming on my Google Calendar felt really big. Because of the short window of time on the reminder, the blue bubble was te
by Megan Decker
Beauty
Busy Philipps Embraces A Grunge Look & $35 Retinol
Busy Philipps‘s performance as Kim Kelly on Freaks and Geeks defined, for an entire generation, the trope of the ride-or-die best friend. In the late
by Amanda Mitchell
Unbothered
We Tried It: Unbothered Reviews Marsai Martin’s Press-On Nails
by Venesa Coger
Beauty
Claws Was Always A Show About Beauty And Vengeance
On its face, Claws has always been a show that a viewer could enjoy on mute. It’s a campy, noir ensemble show that never strayed away from being Too Much
by Amanda Mitchell
Celebrity Beauty
Rihanna’s Pregnancy Beauty Routine Is Surprisingly Simple
When you hear people talking about those women who can do it all, I’m fairly certain they’re all actually referring to Rihanna. The 33-year-old
by Sara Tan
Advertisement
Advertisement
Discover
R29 Stories & News
Watch
R29 Original Series & Films
Shop
R29's Most Wanted