Skip navigation!
Story from Beauty
Photo: Courtesy of Gunpowder & Sky.
Elisabeth Moss as Becky Something in the movie Her Smell.
The following article contains spoilers for Her Smell.
When Elisabeth Moss landed the role as reckless lead singer Becky Something in Her Smell, the actress wasn't exactly used to playing a heedless grunge icon. In fact, the music genre was new territory for the actress — on both a professional and personal level. She told Rolling Stone that she grew up listening to more Britney Spears than Courtney Love, making this on-screen transformation one of her most intensive yet (yes, even including Offred in The Handmaid's Tale). But turning into a glitter-soaked, sweaty, and occasionally even bloody heathen didn't just require thousands of hours on Spotify listening to Bikini Kill and a grungy wardrobe: A really great makeup and hair department was critical.
Advertisement
Her Smell tells the story of Something, a punk-rock musician on the decline who isn't just struggling with waning celebrity, but also substance abuse. Emotional breakthroughs seep into almost every scene of the two-hour and 15-minute film, often leaving Moss covered in distressed eyeliner that spends more time on her cheeks than it does on her eyelids and stringy hair that probably hasn't seen shampoo in weeks. These may seem like minor character details, but Something's deteriorating physical appearance was crucial to the story's narrative.
To get the scoop on the meaning behind the makeup and hair in Her Smell, we talked to the pros: the film's makeup department head Emma Strachman, hair department head Elissa Ruminer, and makeup designer Amy L. Forsythe.

Deconstructed Glitter Is Much More Than Punk Aesthetics

"We wanted her makeup to correlate to what was going on inside of Becky," Strachman tells Refinery29. But even then, the makeup had to look authentic, like this rock star was actually applying eyeliner to her lashline and letting it go for the next several hours without taking one look in the mirror.
shop 4 products
Lit Cosmetics
Cher Size #2 Glitter (holographic)
$16.00
Lit Cosmetics
Smashbox
Be Legendary Lipstick
$21.00
Smashbox
Benefit Cosmetics
Badgal Lash Mascara
$11.00
Sephora
MAC Cosmetics
Liquidlast 24-hour Waterproof Liner
$22.00
MAC Cosmetics
She's not just messy because that was the image of the grunge subculture, but because she neglects herself. Something is a manic grunge tornado — and it shows, especially in Act 3 (of five in the film). After going further and further down the rabbit hole of substance abuse, Something emerges sweaty, damp, and covered in makeup. Her signature shadow-y eyelids, fuchsia lipstick, and stain of glitter are a literal hot mess.
Advertisement
Photo: Courtesy of Gunpowder & Sky.
Becky Something hitting rock bottom on stage.
Although the audience knows Something is spiraling thanks to Moss' emotional performance, it's her lack of self-care that can only be translated through her melting makeup. Forsythe describes it as Something being in so deep, with her god complex at an all-time high, that she can't realize that everyone around her (the entire audience, no less) notices. "Her messy cry is a week's worth of mascara and the glitter, from who knows when she applied it for the show, running down her face as if somewhere inside she’s trying to cleanse herself of the disguise she has had on for so many years," Forsythe explains. "The sweat, the blood, the mascara, the glitter, all mixing on her face is as if to say enough is enough."
Allowing the instability to show through her makeup was crucial; she couldn't be precise while hitting peak meltdown. This look in particular, Forsythe says, is one most audiences will resonate with the most because of how vulnerable and unhinged Something appears: She, in that moment, is succumbing to her demons, and it's on full display.

Moss and Ruminer agreed that Something's look had to shift, even if minimally, throughout the five acts to show both her growth and decline. The only thing that stayed the same was the color (an icier, Courtney-Love blonde) and length created with the help of some extensions. "The hair inspiration came from Courtney Love and Kim Gordon," Ruminer tells us. "If they had a sister it would be Becky."
Advertisement
Davines
Your Hair Assistant Blowdry Primer
$35.00
Davines
Schwarzkopf
Osis+ Session Label Powder Cloud
$11.61
Amazon 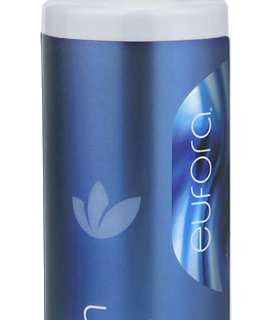 Eufora
Beautifying Serum
$42.50
Eufora
Since the film takes place over the course of a decade, Something's hairstyles shift as drastically as the makeup. The audience watches Something's hair go from glamorously wild and voluminous — essentially, at its finest — in Act 1 to dull and thinning in Act 2 and 3. This immediate change signals that her continued substance abuse triggered physical side effects beyond addiction, actually stunting hair follicle growth.
In Act 3, Something, out of control and isolated, looks as unkempt as possible, which ended up including sweat-soaked hair that is matted and bloody by the end of the act. Thanks to the dramatic shift in lighting from her performance to backstage, Something's brunette roots end up looking darker and dirtier than usual, ultimately forcing the audience to wonder, Is this her rock bottom?
Photo: Courtesy of Gunpowder & Sky.
Looking more stripped-down than usual, Becky Something recording in the studio.

You can't complete a punk singer's look without including her nail polish — or lack thereof. "We did several nail paint jobs throughout the acts," says Strachman, who kept Something in a slate-gray polish palette throughout the film.
Of course, as the character's makeup and hair deteriorate, so does her fading manicure. "There was a lot of chipping involved," Strachman says. "It had to look worn."
During Act 4, when Something is getting sober and she's at her most vulnerable, her nails are without a strip of polish for the first time throughout the whole movie, essentially to match her stripped-down makeup and hair look. "That's like a breath of fresh air, kind of a rebirth for Becky," Strachman explains. "There's a stillness to the act, which is this total counterpart to what we'd seen up until that point."
It's still too early to say whether Moss will rake in any awards nominations for this role, but at the very least, begin your considerations now for Strachman, Ruminer, and Forsythe, who nailed the aesthetics of Something's rock-and-roll rollercoaster.
At Refinery29, we’re here to help you navigate this overwhelming world of stuff. All of our market picks are independently selected and curated by the editorial team. If you buy something we link to on our site, Refinery29 may earn commission.
Celebrity Beauty
Well, Travis Barker Got Himself A “Kourtney” Tattoo
Things seem to be going well between Kourtney Kardashian and Travis Barker. Two months after making their relationship status Instagram official, we have a
by Megan Decker
Skin Care
Desi Perkins Pays Homage To Her Mexican Roots With Her Skin-Care ...
When content creator and beauty influencer Desi Perkins launched her eyewear brand, Dezi, last summer, every last pair of sunglasses sold out in under an h
by Thatiana Diaz
Celebrity Beauty
Hilary Duff Dyes Her Hair Back To “Normal” After Givi...
In the span of a week, Hilary Duff welcomed her new baby girl and said goodbye to her blue hair. After giving birth at the end of March, the actress revert
by Sarah Midkiff
Advertisement
Beauty
Amanda Gorman’s Mom Helped Do Her Hair For Her Vogue
After a stunning performance at the 2021 presidential inauguration, there was no doubt in our minds that Amanda Gorman’s impact would continue to sky
by aimee simeon
Celebrity Beauty
Reese Witherspoon’s New Gig Is A Commitment To “Clean...
Over her decades-long career, Reese Witherspoon has only ever partnered with one beauty brand, and that’s Elizabeth Arden, one of the most iconic of
by Megan Decker
Celebrity Beauty
Chrissy Teigen Dyed Her Hair Pastel Pink (For Real This Time)
If you’re in a bit of a rut, it might be time for a new hair color. While there’s always a case to be made for blonde highlights heading into s
by Megan Decker
Celebrity Beauty
Gwyneth Paltrow’s Daughter Mocks Her Mom’s Goop-iness...
Gwyneth Paltrow made her first appearance on the official Goop TikTok account over the weekend with the help of her daughter, Apple Martin, and some light
by Sarah Midkiff
Celebrity Beauty
Kerry Washington Matched Her Mermaid Manicure To Her Swimming Cap
Kerry Washington made a splash at last night’s SAG Awards — literally. For the virtual show, the actress went for a glamorous mermaid-inspired look
by Sarah Midkiff
Beauty
Make Like Beyoncé & Dip Your Fingernails In Gold
Less than two weeks into spring, and we already know there will be no shortage of manicure inspiration this season. From Hailee Steinfeld’s sexy, min
by Sarah Midkiff
Celebrity Beauty
Travis Barker’s Daughter Just Gave Him A Makeover — & The V...
On Wednesday, Travis Barker‘s daughter, 15-year-old Alabama Luella Barker, posted a makeup tutorial featuring the former Blink-182 drummer she calls
by Sarah Midkiff
Celebrity Beauty
Experts Do Not Recommend Applying Sunscreen Like Gwyneth Paltrow
Update: Criticism of Gwyneth Paltrow’s sunscreen application reached a fever pitch yesterday, with celebrity skin experts like Caroline Hirons, Renée Ro
by Megan Decker
Celebrity Beauty
Justin & Hailey Bieber Now Have Matching Peach Tattoos
Update: Hailey Bieber, ever the supportive spouse, is using her own platform to spotlight husband Justin’s new single with the #PeachesMakeupChalleng
by Sarah Midkiff
Advertisement
Advertisement
Discover
R29 Stories & News
Watch
R29 Original Series & Films
Shop
R29's Most Wanted