Skip navigation!
Story from Shopping
Since her rise to stardom began in 1951, when she appeared on Broadway as the title character in Gigi, Audrey Hepburn has never left the cultural spotlight. Her illustrious movie career blossomed soon after, and a generation-spanning fascination with Hepburn's unmistakable style still lives on in the public consciousness. Even for those who didn't live through her years of box office fame, odds are you've come across and been inspired by iconic images of the Hollywood legend. Who hasn't gazed at the poster for Breakfast at Tiffany's — the movie that cemented Hepburn's status as a style icon — and thought, Now, that's chic.
Advertisement
Photo: Time Life Pictures/Getty Images.
Hepburn in Times Square during the Broadway run of Gigi, 1951.
Shop This 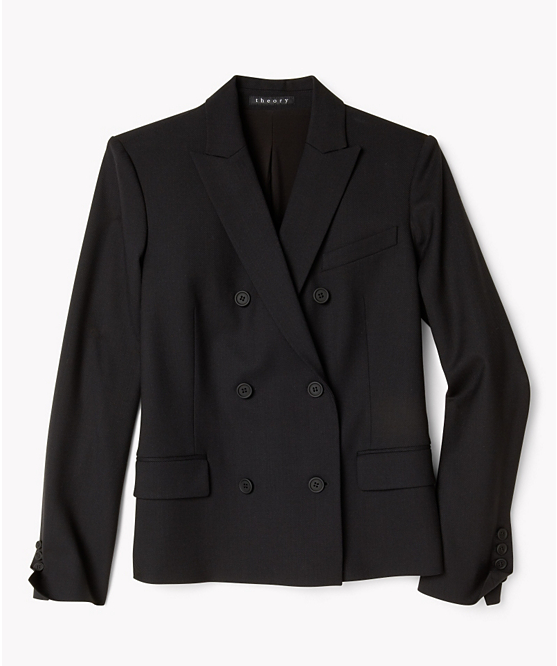 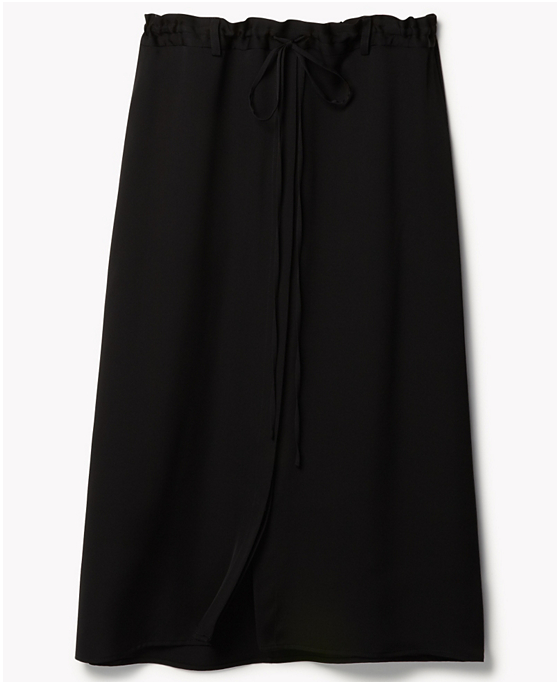 Theory
Orvokki Skirt In Modern Georgette
$295.00
Rebecca Taylor
Laura Jacket
$395.00
Banana Republic
Cropped Sateen Blazer
$165.00
Banana Republic
Knit Layered Long Skirt
$89.50
Hepburn would’ve turned 86 today. Years after her heyday — and even after her death in 1993 — the actress is still considered the epitome of sophistication. Any mention of her name summons an image of the screen gem's doe eyes, short-but-impeccably-maintained bangs, and a simple gown seemingly tailor-made to her frame. For many, it all goes back to that little black dress. Stylist and creative director Freddie Leiba grew up in Hepburn’s prime. The image of Audrey standing in front of Tiffany’s on Fifth Avenue as Holly Golightly, in her Givenchy column gown, inspired his own work as creative director of Harper’s Bazaar in the 1980s — where he staged an entire editorial around this symbolic fashion moment. As he moved on to roles at InStyle and Allure, and as a consultant for different designers, Leiba found that the classic silhouette still resonated. “When you think about it, it’s the easiest thing you can wear,” Leiba explains. “All of a sudden, you put on a pair of diamond earrings — it can be the simplest black dress — and it becomes a cocktail dress. It becomes a transition.”
Photo: Popperfoto/Getty Images.
Hepburn on a beach in Sussex, England, 1951.
Shop This
Zara
Flared V-neck Dress
$29.95
Cynthia Rowley
Tropical Jacquard Tea Length Dress
$448.00
Temperley London
Arielle Printed Satin-twill Dress
$1295.00
Holly Golightly is, of course, only a character. So, the Givenchy gown that became so synonymous with Audrey the actress was — when you boil it down — a costume. But, Hepburn’s personal style and her on-screen wardrobe were very much intertwined. Hepburn collaborated with designers on many of the outfits she wore in her films, Leiba notes. “These people,” Leiba says, referring to Hepburn’s costume designers and hairdressers, “were trusted. They were interested in making her feel right for that movie.” And, she insisted on being part of the design process from the very beginning: In his biography Enchantment: The Life of Audrey Hepburn, Donald Spoto notes that for Roman Holiday — Hepburn’s first big Hollywood flick — Audrey returned costume legend Edith Head’s original sketches with her own suggestions, “especially the style of simpler necklines, wider belts and flatter shoes for the movie spree around Rome.”
Advertisement
Photo: ullstein bild/Getty Images.
Hepburn in Switzerland, 1951.
Shop This
J.Crew
New Campbell Capri Pants In Bi-stretch Cotton
$89.50
Vince
Strapping Stretch Wool Trousers
$265.00
& Other Stories
Tapered Cotton Trousers
$75.00
Hepburn's involvement in her own costuming continued throughout her career. Her authority over how her characters were dressed stemmed from her understanding of the roles she was playing. “Audrey simply knew what clothes suited her and her character, and she had a calm confidence in her sartorial choices that she did not always have in her own talent,” Spoto continues. And, this was true from the beginning, when the actress met Hubert de Givenchy in 1953. Hepburn travelled to Paris to source her own wardrobe for the film Sabrina (much to the surprise of Head, who was supposed to oversee the costumes). After a small name mix-up — Givenchy thought he would be welcoming Katharine Hepburn to his atelier — Audrey showed up at Rue de Alfred de Vigny in Paris to meet the designer. As he was in the throes of designing his fourth collection, it was by no means perfect timing. But, upon Hepburn’s insistence, Givenchy offered some samples from his previous season. The rest is history.
Photo: GAMMA/Getty Images.
Hepburn with Frank Sinatra in Las Vegas, 1956.
Shop This
Topshop
Satin Stripe Bardot Dress
$140.00
ASOS
Bardot Strappy Debutante Midi Dress
$76.00 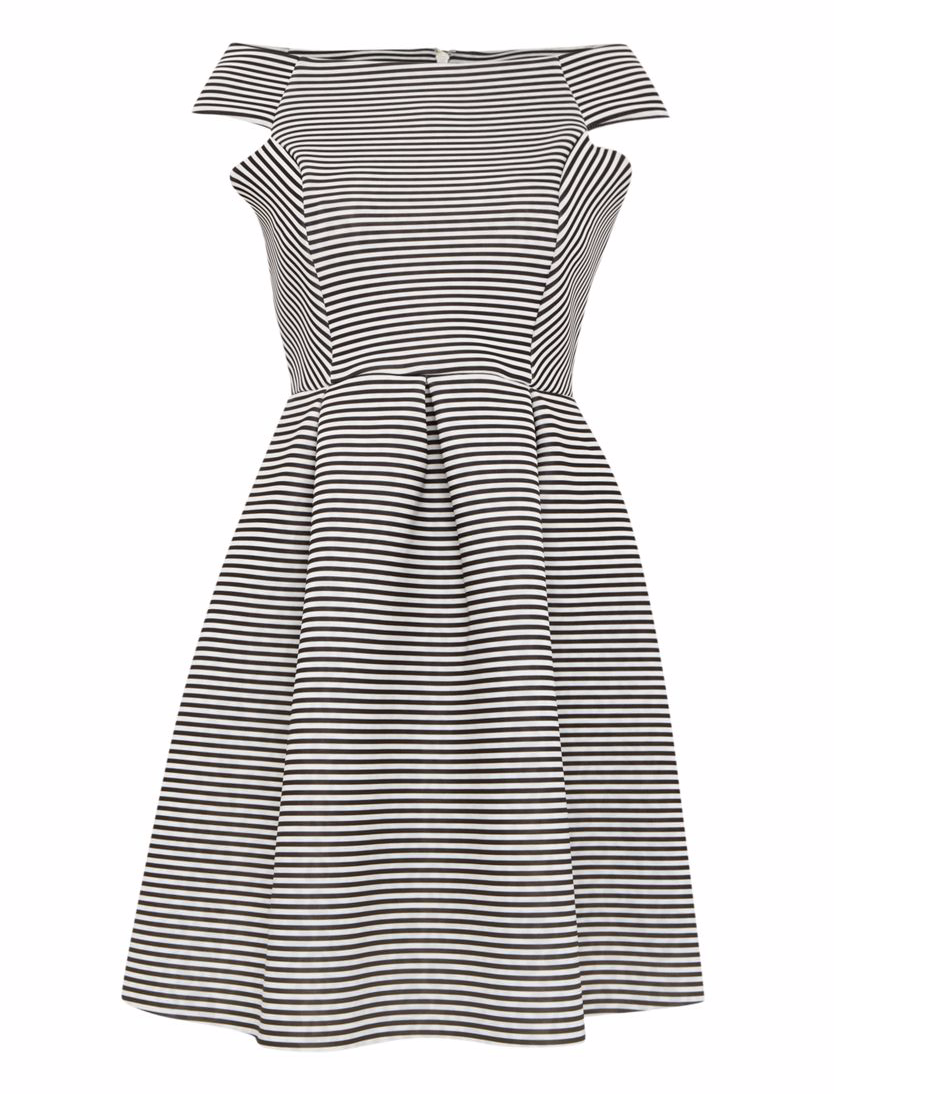 Lipsy
Michelle Keegan Off Shoulder Striped Scuba...
$98.29
Long before the little black dress of Breakfast at Tiffany's came the Sabrina neckline from the eponymous 1954 film. It was previously known as the bateau (or boat) neckline, and as Givenchy would later recall to Vanity Fair, Hepburn was drawn to it “because it hid her ‘skinny collarbone but emphasized her very good shoulders.’” After Audrey dazzled in the silhouette on screen, the style was renamed after her character. Hepburn herself would later don different iterations of the collarbone-masking neckline, like the gown above — just one example of how her on-screen styles spilled over into her personal life.
Advertisement
Photo: Pictorial Parade/Getty Images.
Hepburn with her first husband, Mel Ferrer, in Italy, 1956.
Shop This
Ines de la Fressange for Uniqlo
Cotton Button Down Long Sleeve Shirt
$14.90
Madewell
Oversized Button-down Shirt
$79.50
Equipment
Brett Stripe Shirt
$186.00
While we place Hepburn up on the ultimate style pedestal today, the actress wasn’t so much of an innovator as she was the perfect mannequin. “When you think about 1950s, people were well-dressed,” Leiba explains. What she was, then, was “the role model for that period. She became the ambassador for well-dressed woman of the period.” As her son, Sean Ferrer, recalls his mother’s fashion philosophy in his book, Audrey Hepburn: An Elegant Spirit : “My mother believed that a woman should find a look that works for her and use fashion and its seasonal changes to accessorize it, rather than to be a slave to fashion, re-creating one’s look over and over again.” The silhouettes we consider synonymous with Hepburn weren't pushing the envelope: They were simply the fashions of the times. “Capri pants, the full skirt, the sweater with the hankerchief around her neck: These were all '50s styles,” Leiba continues. “She glorified it.” Going through pictures of Audrey, he says, we can see the major fashion moments of the time represented. It didn’t hurt that her close personal friend Givenchy was one of the era's primary tastemakers.
Photo: LE TELLIER Philippe/Getty Images.
Hepburn at Givenchy's atelier in Paris, 1964.
Shop This
H&M
Beaded Coat
$129.00
Whistles
Montaniita Frayed Tassel Parka
$470.00
Valentino
Crochet Cotton-blend Coat
$1886.40
Nowadays, celebrities tend to borrow clothes from designers, only to return them after a couple of wears, Leiba notes. Hepburn, on the other hand, owned her closet. So, she had a stronger, personal tie to the items she put on. Audrey understood what worked for her tall, angular frame, and — as Ferrer points out in his book — she always returned to an ethos of simplicity. Hepburn would tell her son, “Boil it down to what it counts the most: What is the essence of what you are trying to do, what is the most important thing? Things only get complicated when you are trying to address too many issues.”
Photo: Pictorial Parade/Getty Images.
Hepburn playing golf, circa 1960.
Shop This
Wilfred
Narrateur Skirt
$120.00
Tibi
Satin Poplin Maxi Skirt
$445.00
Lemaire
A-line Midi Skirt
$520.80
Hepburn's style philosophy comes down to gaining a fundamental understanding of what makes you feel comfortable in your own skin. While it may not sound revolutionary, this simple idea goes a long way toward illuminating what has made Hepburn such a lasting style icon. In her book The Little Black Dress, Amy Holman Edelman explains why Holly Golightly’s wardrobe is so enchanting: “Worn in almost every scene, the dress takes Hepburn from cocktails to Sing Sing to dinner at ’21,’ with merely a change of accessories. The dress, and Hepburn, manage to look different in every frame — yet these images, and this little black dress, have synthesized into the ultimate symbol of inestimable style and chic.” More importantly, it was a confidence boost for Holly: The character would slip on the gown to bring herself up, to feel better — a gesture that anyone with a special power-piece in their closet can relate to (hear, hear!). Hepburn's son puts it most eloquently, “If there was timelessness, it was because she believed in quality, and if she is still an icon of style today, it is because once she found her look, she stayed with it throughout her life," Ferrer writes. Leiba echoes this sentiment, concluding that Audrey “was just an icon without realizing she was an icon.” Remaining true to one’s own personal style — the Audrey Hepburn philosophy of fashion — is certainly a mindset we can get behind.
Shopping
20 Just-Right Jackets To Layer Up With In Cooler Weather
by Alyssa Coscarelli
Most Wanted
This Beloved Swimwear Brand Just Dove Into Eco-Friendly Activewear
by Emily Ruane
Prime Day
Walmart’s Big Save Event Has Everything From Small-Space Furnitur...
by Emily Ruane
Style
Zara’s New Collection Is Packed With Fall’s Biggest Trends & Best...
by Eliza Huber
Shopping
9 Easy-To-Wear Leggings Trends That Aren’t Basic Black
by Eliza Huber
Style
These 16 Indie Fashion Sales Will Help Combat Prime Day Burnout
by Eliza Huber
Amazon
42 Amazon Prime Day Deals We Actually Added To Our Carts
by Emily Ruane
Amazon
Nail Creams, Ladybug-Shaped Vacuums, & More Of Amazon’s Mos...
by Elizabeth Buxton
Prime Day
Swaddle Yourself In These Soft & Cozy Prime Day Deals
by Emily Ruane
Prime Day
Get A Leg Up On Holiday Shopping With Prime Day’s Best Gift...
with Amazon celebrating Prime Day later in the year than usual, it offers a prime (sorry) opportunity to get a leg up on gift shopping.
by Ray Lowe
Prime Day
Enough Prime Day Deals On Leggings To Last A WFH Lifetime
Amazon has a lifetime supply of, with thousands of reviewer-vetted approvals, that are now on sale for its legendary Prime Day occasion.
by Kate Spencer
Most Wanted
Stylish Joggers You’ll Want To Wear For Everything (Except ...
by Amanda Randone
Discover
R29 Stories & News
Watch
R29 Original Series & Films
Shop
R29's Most Wanted