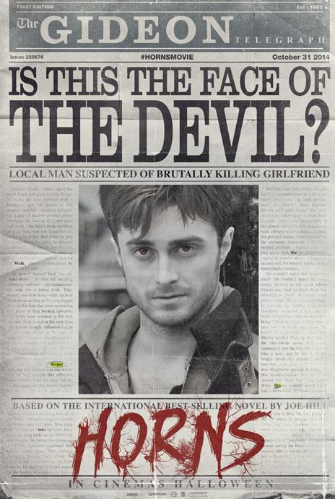 Photo: Courtesy of Empire Magazine.
Wait! Before you start burning all your copies of Harry Potter, hear us out. Daniel Radcliffe isn't actually the Devil. Let's just get that out of the way. But, the 24-year-old former boy wizard might be playing the Prince of Darkness in an upcoming movie. Horns is a pitch black comedy in which Radcliffe stars as a man who may have killed his girlfriend (Juno Temple). Either way, he wakes up one morning and notices a pair of devilish-looking horns protruding from his head.
Directed by Alexandre Aja and based on the acclaimed fantasy novel by Joe Hill, Horns had its premiere at last year's Toronto International Film Festival, where it was met with mixed reviews. Radcliffe however, is said to shine in a role that sees him tap into some much darker places than we're used to seeing from the former child star. Horns is expected to hit U.K. theaters on October 31, but with an upcoming panel at Comic-Con and this brand-new poster courtesy of Empire Magazine, expect to see a horny Radcliffe in U.S. theaters soon. (Empire Magazine)
Advertisement
Update: The new international trailer for Horns just hit the web, and it looks like the film's marketing team has decided to play down the comedic notes we mentioned earlier in favor of something much darker.
The shift in tone makes sense, considering Horns will hit theaters this Halloween and is about a man who actually may be turning into Satan.
Check out the gory new clip below.
Entertainment
The Gucci Family Calls Lady Gaga’s New Movie “Offensive” & “...
The Gucci family is not as excited by Ridley Scott’s upcoming movie, House of Gucci, as fans are. In fact, Gucci heiress Patrizia Gucci tol
by Natalie Morin
Movies
Sebastian Stan & Denise Gough Truly Go For It In The Steamy, Drea...
If you thought Sebastian Stan’s recent Instagram butt pic was good, just wait until you see the movie it’s meant to promote. In Monday, The Falcon &
by Anne Cohen
Writing Critics' Wrongs
Anne Hathaway Should Host The Oscars Again — Alone This Time
Criticism is a field overwhelmingly dominated by (surprise, surprise) white men. Not anymore. In Refinery29’s monthly series, our movie critic gives
by Anne Cohen
Advertisement
True Crime
In The End, Why Did You Kill Me Is About A Lot More Than A...
Spoilers are ahead. On the surface, Netflix’s new documentary Why Did You Kill Me looks like the simple story of a woman who tracked down her daughter’
by Leah Marilla Thomas
Movies
The Best Rom-Coms On Netflix
by Elena Nicolaou
Movies
Wild Wild Country‘s Ma Anand Sheela Has A New Story ...
Netflix has given us a plethora of darkly fascinating true crime stories over the years, but little could have prepared the world for the the story of the
by Ineye Komonibo
Movies
The Thunder Force Soundtrack Is Basically A Playlist For S...
by Martha Sorren
Entertainment
20 Years After Josie & The Pussycats, Tara Reid Wouldn’t...
It’s been 20 years since Tara Reid played Melody Valentine, the sweet, spacey drummer from Josie and the Pussycats, but she still talks about her as one
by Anne Cohen
Movies
Melissa McCarthy’s Whole Family Is The Thunder Force...
by Martha Sorren
Movies
Why Are We All Watching What Lies Below On Netflix?
It seems like every week, a random new film grabs a hold of Netflix subscribers and takes them down a rabbit hole of intrigue, chaos, and sketchy plot hole
by Ineye Komonibo
Movies
A Mother Uses Myspace To Track Down Her Daughter’s Killer In New ...
How far would you go to solve the murder of someone you loved? In the new Netflix original documentary Why Did You Kill Me?, one woman takes the investigat
by Ineye Komonibo
Entertainment
Joss Whedon Allegedly Made Things Really Bad On The Set Of Jus...
Thanks to the HBO Max premiere of the highly anticipated Zack Snyder cut of the 2017 superhero film Justice League, the conversation about the film’s oth
by Ineye Komonibo
Advertisement
Advertisement
Discover
R29 Stories & News
Watch
R29 Original Series & Films
Shop
R29's Most Wanted