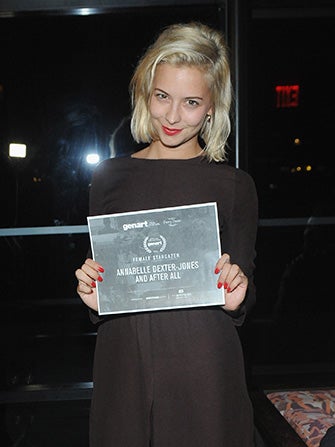 When your brother's a famous DJ, one sister's a highly sought-after womenswear designer, and the other sister's a renowned singer-songwriter, it's easy to feel like you've gotta find your own place in the limelight. And for model/designer Annabelle Dexter-Jones, that's exactly what she's done with her most recent accolade. For the 18th annual GenArt Film Festival, Dexter-Jones received the Female Stargazer award for best actress in the short film
And After All
. And the emphasis here is really on "short," as the film is a solid 12 minutes long.

According to GenArt, the Stargazer award "honors a uniquely powerful performance by an emerging actor and actress taking part in the festival." The budding actress was recognized for her role as a New England transplant trying to make her way as an artist in New York. When she faces betrayal from her boyfriend and best friend, she decides to return to her small New England town to re-evaluate her path in life. Does anyone else feel like they're watching Gossip Girl?
Somos Latinx
Dear Miya Ponsetto, You Can Be Latinx & Still Be A Karen
Miya Ponsetto, the white woman dubbed as “SoHo Karen” on social media, was forcibly arrested in California yesterday. Her arrest comes after sh
by Jasely Molina
Food & Drinks
Is A Bagel Really A Bagel If It Isn’t In NYC?
by Elizabeth Buxton
New York
We Dig This NYC Dim Sum
by Camille Coklow
Beauty
The 17 Most Epic NYC Massages
by Kayla Jacobs
Movies
11 Movies Perfect For A Glorious Snow Day
by Vanessa Golembewski
New York
You HAVE To Try The Avocado Toast At These NYC Restaurants
by Elizabeth Buxton
New York
The Absolute Best Spots To Slurp Ramen In NYC
by Zoe Bain
New York
The NYC Rooftops You Need To Hit This Summer
by Elizabeth Buxton
Beauty
The Best Cheap Haircuts In New York City
Choppa style, for cheap.
by Liesa Goins
New York
The Indie Bride-To-Be’s Guide To Dress Shopping In NYC
by Ashley Castanos
New York
Is This Really What The NYPD Thinks About Rape?
NYPD captain Peter Rose has angered rape advocates after saying “acquaintance rape” cases are not as serious as rapes committed by strangers.DN
by Shannon Carlin
US News
Why This New York Subway Mural Of A Gay Couple Is So Important
The New York subway system is making headlines this week, with the opening of its long-awaited Second Avenue line. One of the new stations along that line
by Sabrina Rojas Weiss
Discover
R29 Stories & News
Watch
R29 Original Series & Films
Shop
R29's Most Wanted