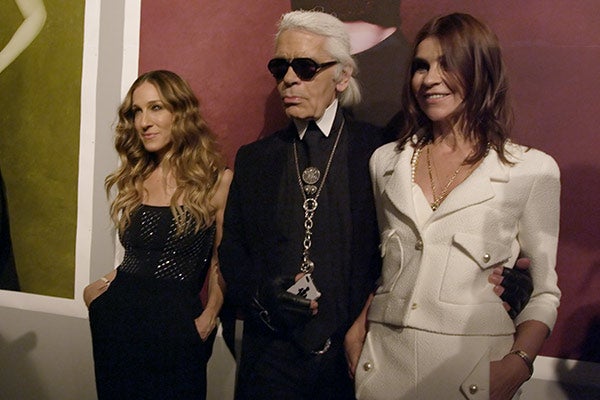 Courtesy of Way to Blue

We always knew Carine Roitfeld was cool, and now we have proof. In town for London Fashion Week, the style maverick and fashion editor invited us to The May Fair Hotel to dish about
Mademoiselle C
, the upcoming documentary chronicling her launch of CR Fashion Book after departing Paris Vogue. (Obviously, we said "Yes!", and did a celebratory cartwheel.)

Dubbing the nine months of filming as a "pregnancy story," director Fabien Constant joined the impeccably chic Roitfeld for a revealing chat about the film, which is a sort of lighthearted answer to The September Issue. In fact, the chat was so illuminating, we did all we could to to keep track of all the bombshells the gracious and candid Roitfeld lobbed our way. A few of our favourites, below.
Advertisement
1. Tom Ford gives great massages.
"We're both Virgos, so we think the same way," Roitfeld says of her long-standing friendship with the designer, whom she first met when he came to her studio after months of her dodging his calls. "You won't believe it, but he called me maybe 20 times on the phone. I said, 'Who is Tom Ford? Who is Gucci? What is a loafer?' So you think, 'No, we have no time, goodbye, maybe next month.' One day, he asked if he could visit me at the studio. I said okay. There is no AC [air-conditioning] in Paris and it was July, so [it was] very hot and sweaty. And, Tom Ford came in the room and I sat up in my chair [makes loved-up face]. I said, 'Ah, maybe we can help you for the next show.' Going to Gucci changed my career...and it's just because Tom Ford came in looking very sexy." Apparently, Ford's talents also extend beyond the runway. "A magic thing about Tom is that he has great hands, and he loves to do a massage on your back sometimes," Roitfeld adds. "So I was lucky to have so many hand massages on my back."

2. She digs tequila.
"Before I was very faithful to vodka, and I just discovered tequila," the Parisienne says of her guilty pleasures. "It goes up to your brain, and I'm very shy, so now tequila is a big help for me."

3. The last film she watched was The Hangover 3.
After Constant shared that the last film he watched was a documentary on Alaskan fisherman, Roitfeld laughingly admitted that she had just watched the comedy on a plane. "I love Bradley Cooper," she says. "And, it's good to laugh. I love laughing and there's not a lot of moments when you can laugh."

4. She hates clock-watchers.
Roitfeld's advice for budding fashion editors? Work hard. "You're not going to learn a lot of things in school," she says. "You have to get a job as an intern and not look at your watch until 6 p.m. and then leave. Everything starts at 6 p.m. I was a bit disappointed when I'd see all these young kids come to the office with their CVs to get a job as an intern, and at a quarter to 6, they start to put their coats on. I think, but everything's starting now! Why are you leaving? It's always [later] when they're gone, exciting things happen. If you love fashion, there is no time, no watch, no schedule." Take note, kids.

5. Being a grandmother has made her a better person.
Romy, her granddaughter from daughter Julia Restoin-Roitfeld, has been instrumental in helping Roitfeld settle into her post-Vogue Paris life. "[For] 30 years I've been working in fashion, and you forget about real life, sometimes," she says. "When you have a baby on your stomach, you put down your iPhone. It makes you more quiet because the baby [is listening to] the beat of your heart... But it's good that she is not my daughter. After awhile, I say 'Bye-bye, Julia, I'm going to a show.'" As it so happens, her favourite scene from the film is the one in which Karl Lagerfeld pushes her granddaughter's stroller.

Fashion
The Future Of Lingerie Is Genderless
When Louis Dorantes moved to Brooklyn in the late 2010s, the Parsons-trained designer began making going-out looks for the queer parties he attended. “It
by Frances Solá-Sant...
Deals
The Best Fourth Of July Sales, Found
Sure, there are fireworks and flag-waving, but the Fourth of July is also a solid holiday for sorting through the unbelievable deals being offered at the b
by Mercedes Viera
Fashion
Marimekko’s Latest Collaboration Is Wearable Art
The summer is prime time to create a capsule wardrobe full of easy-to-wear pieces. And Finnish design house Marimekko’s latest collaboration puts a fun s
by Frances Solá-Sant...
Advertisement
Designers
Why You Won’t See Rainbows In This Gender-Affirming Brand’s...
When the founders of Urbody — a brand making affirming active- and underwear for trans, nonbinary, and gender non-conforming people — set out to create
by Lindsay Lee Wallace
Most Wanted
How To Shop This Year’s Nordstrom’s Anniversary Sale ...
If you’ve clicked yourself to this page, then you’re here for all the need-to-know info on Nordstrom‘s biggest annual event — the Nords
by Karina Hoshikawa
Dedicated Feature
5 Ways To Wear The Shoe Trend That’ll Be Everywhere This Su...
by Jenna Igneri
Plus-Size Fashion
The Best Plus-Size Undies On The Internet
by Chichi Offor
Fashion
We Tried The Most Popular Swimsuit Brands Out There — Here Are R2...
If you’re anything like us, you may have finally gotten around to pulling out your bikinis for the warm-weather season just to discover that your swi
by Irina Grechko
Abortion
What The Green Scarf Means In The Fight For Reproductive Rights
Roe v. Wade has been overturned. As activists across the country rally to protest, a new symbol has emerged in the fight for abortion rights: the green sca
by Frances Solá-Sant...
Deals
The TikTok Famous Binder Alternative From Girlfriend Collective I...
Super Sale Alert: Products in this story are marked down up to 60% off for a limited time. Shop our full coverage of the event here — or, dive directly i
by Mercedes Viera
Sales
Everything At Girlfriend Collective Is On Sale For Up To 60% Off
Girlfriend Collective’s sustainable workout togs were built for movement — the brand’s cloud-like leggings, stylishly-cut sports bras, and super-soft
by Alexandra Polk
Most Wanted
Here’s What You Need To Get From Herbivore Botanicals 25% O...
If your skincare routine needs some revamping, we have good news. Herbivore Botanicals is offering 25% off everything on its site for a limited time. Simpl
by Mercedes Viera
Advertisement
Advertisement
Discover
R29 Stories & News
Watch
R29 Original Series & Films
Shop
R29's Most Wanted