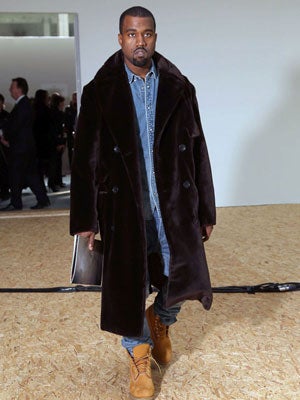 You know those outstanding LinkedIn notifications you've been avoiding for the past six months? Take note. In the newest addition of "Celebs: They're Just Like Us" Kanye West is now using the online networking site to hire a crew of people for his forthcoming RTW initiative. There was the CFO position, which was posted, but is no longer available (filled, we'd venture to guess?), and still up, the Vice President of Production for someone with at least two years of experience in a director role in men's and women's fashion.
The description reads, "The Kanye West clothing project we haven't announced the actual brand name yet will leverage Mr. West's success in high fashion and hip-hop music to bring accessible style to malls and other outlets across America and around the world. Mr. West will play a hands-on role in leading design efforts, having studied and worked with design houses such as Fendi, Giuseppe Zanotti, Nike and Louis Vuitton." And as for the job itself? The posting says, "The venture will be very high profile and, unlike those in which celebrities merely lend their name to a label, this venture will have the power of Mr. West's creative genius at the heart and soul of it. In this role you will oversee all aspects of production, from pre-production to sourcing to production, building the function from square one. In addition to interacting with Mr. West, you will join a team that has deep experience and track records of success in the industry." Sounds like a Yeezus-esque task, indeed! (LinkedIn)
Somos Latinx
Dear Miya Ponsetto, You Can Be Latinx & Still Be A Karen
Miya Ponsetto, the white woman dubbed as “SoHo Karen” on social media, was forcibly arrested in California yesterday. Her arrest comes after sh
by Jasely Molina
Food & Drinks
Is A Bagel Really A Bagel If It Isn’t In NYC?
by Elizabeth Buxton
New York
We Dig This NYC Dim Sum
by Camille Coklow
Advertisement
Beauty
The 17 Most Epic NYC Massages
by Kayla Jacobs
Movies
11 Movies Perfect For A Glorious Snow Day
by Vanessa Golembewski
New York
You HAVE To Try The Avocado Toast At These NYC Restaurants
by Elizabeth Buxton
New York
The Absolute Best Spots To Slurp Ramen In NYC
by Zoe Bain
New York
The NYC Rooftops You Need To Hit This Summer
by Elizabeth Buxton
Beauty
The Best Cheap Haircuts In New York City
Choppa style, for cheap.
by Liesa Goins
New York
The Indie Bride-To-Be’s Guide To Dress Shopping In NYC
by Ashley Castanos
New York
Is This Really What The NYPD Thinks About Rape?
NYPD captain Peter Rose has angered rape advocates after saying “acquaintance rape” cases are not as serious as rapes committed by strangers.DN
by Shannon Carlin
US News
Why This New York Subway Mural Of A Gay Couple Is So Important
The New York subway system is making headlines this week, with the opening of its long-awaited Second Avenue line. One of the new stations along that line
by Sabrina Rojas Weiss
Advertisement
Advertisement
Discover
R29 Stories & News
Watch
R29 Original Series & Films
Shop
R29's Most Wanted