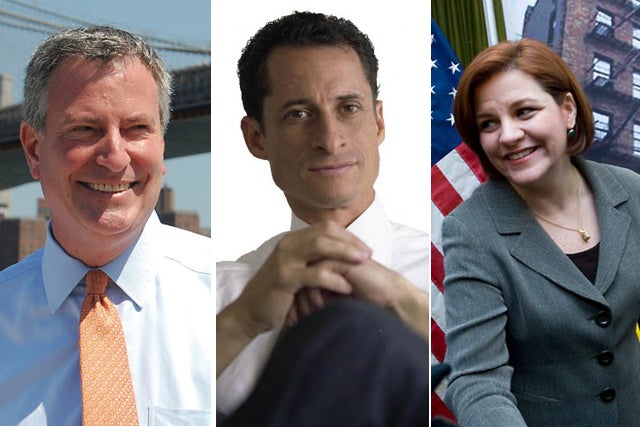 PHOTO: VIA BILL DE BLASIO'S FACEBOOK, ANTHONY WEINER'S FACEBOOK, AND CHRISTINE QUINN'S FACEBOOK.
[UPDATE]: 12:20 a.m.: Because of many broken levers in voting machines and the large amount of paper ballots, the votes in the Democratic mayoral primary will be recounted tomorrow. And since the paper ballots have to be postmarked by today, we won't have an official answer on whether a de Blasio/Thompson runoff election will take place for another few days. Stay tuned!
[UPDATE]: 11:56 p.m.: de Blasio has finished first in the Democratic mayoral primary, with 96% of voting places reporting he has earned 40.2% of votes. With such a narrow lead over the required 40% in avoiding a runoff and 4% of votes still to come in, Thompson has stated, "My friends, this is far from over."
Advertisement
[UPDATE]: 11:36 p.m.: Scott Stringer has won the Democratic primary for comptroller.
[UPDATE]: 10:56 p.m.: Lhota is the projected winner of the Republican mayoral primary with 52% of votes.
[UPDATE]: 10:49 p.m.: Weiner is delivering his concession speech, while de Blasio leads with 39.3% of votes and Thompson takes second place with 25.9% of votes, with 72% of voting places reporting.
[UPDATE]: 10:32 p.m.: With 55% of voting places reporting, de Blasio maintains a steady lead with 39.1% of votes, and Quinn has dropped to just 15.4% of votes.
[UPDATE]: 9:36 p.m.: Okay, we don't know for sure, quite yet. But, The New York Times reports De Blasio has 38.2% of the vote and Quinn has 31.5%, with 1% of voting places reporting.
Though some New Yorkers have not yet accepted the fact that Michael Bloomberg will have to eventually leave office, many of us hit the polls today to have our say in who should fill his shoes. Now that the polls have officially closed in today's mayoral primary, we're anxiously awaiting the results. At this time, exit polls from The New York Times indicate that Bill de Blasio has won far more votes than his fellow candidates in the Democratic mayoral primary, though it is still unclear if he has obtained the 40 percent necessary to avoid an additional race against the candidate with the second highest number of votes. Stay tuned for live updates!
29Rooms
29Rooms Is Back; Here’s How To Attend Safely
Over the past year and a half, we’ve missed many opportunities to attend concerts, festivals, parties, and hangs. And although restrictions have loosened
by R29 Brand Experie...
Somos Latinx
Dear Miya Ponsetto, You Can Be Latinx & Still Be A Karen
Miya Ponsetto, the white woman dubbed as “SoHo Karen” on social media, was forcibly arrested in California yesterday. Her arrest comes after sh
by Jasely Molina
Food & Drinks
Is A Bagel Really A Bagel If It Isn’t In NYC?
by Elizabeth Buxton
Advertisement
New York
We Dig This NYC Dim Sum
by Camille Coklow
Beauty
The 17 Most Epic NYC Massages
by Kayla Jacobs
Movies
11 Movies Perfect For A Glorious Snow Day
by Vanessa Golembewski
New York
You HAVE To Try The Avocado Toast At These NYC Restaurants
by Elizabeth Buxton
New York
The Absolute Best Spots To Slurp Ramen In NYC
by Zoe Bain
New York
The NYC Rooftops You Need To Hit This Summer
by Elizabeth Buxton
Beauty
The Best Cheap Haircuts In New York City
Choppa style, for cheap.
by Liesa Goins
New York
The Indie Bride-To-Be’s Guide To Dress Shopping In NYC
by Ashley Castanos
New York
Is This Really What The NYPD Thinks About Rape?
NYPD captain Peter Rose has angered rape advocates after saying “acquaintance rape” cases are not as serious as rapes committed by strangers.DN
by Shannon Carlin
Advertisement
Advertisement
Discover
R29 Stories & News
Watch
R29 Original Series & Films
Shop
R29's Most Wanted