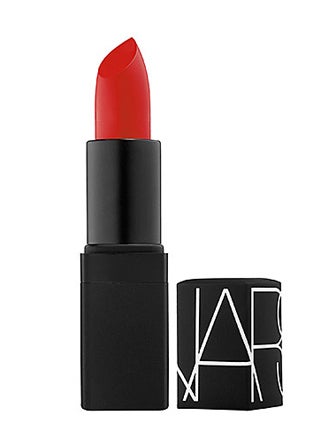 Oh, modern science. Every day, making enormous strides in areas of women's health and wellness. Like these studies on what lipstick color is the most effective man-snagger. In case you were worried, science now proves that men like red lipstick the most. What a... relief?
Well, for anyone who wears red lipstick for purposes other than to ensnare some dude, this "scientific" information is largely irrelevant. We're assuming that more than a few of you are with us on this. When we reach for the red, much like the rest of our makeup, we're doing it for ourselves — because we love it and we think it looks awesome. Duh.
Advertisement

Apparently, though, this isn't enough of a reason for us to want to wear it, as science (or at least the University of Manchester) seems out to prove. As reported by the
Daily Mail,
"Scientists at the University of Manchester found that red lipstick draws attention to the mouth, most notably from the opposite sex." If we saw a man wearing red lipstick, our attention would probably be drawn to his mouth, too. But, onward: "In their study, they tracked the eye movements of 50 men who were viewing different images of women and found that men spent longer fixating on the women wearing red lipstick. They found that they spent 7.3 seconds staring at red lips, 6.7 seconds on those with pink lips, and 2.2 seconds on those who wore no lipstick." This combined with a study that proved waitresses wearing red lipstick get more tips has caused the Daily Mail to proclaim that science has found red to be the sexiest lip color.

We really don't love being told whether or not our favorite lip color is the sexiest of them all. We already know it's sexy, because our definition of "sexy" extends far beyond what attracts a man, for reasons like feminism, individuality, self-esteem, or in my personal experience, having a girlfriend who doesn't give a hoot what color my lipstick is. All she cares about is whether or not it's going to come off on her (Sephora's cream lip stain won't, just saying). Isn't that how it should be?
Advertisement
At any rate, we think there might be slightly more to the sex appeal of a lipstick color than just what color it is. Like, um, how good it makes you feel. We can certainly see how red lipstick might be the sexiest thing ever on a woman who loves it. But, for all the chapstick-only girls out there, we like to believe that one's sex appeal has more to do with one's confidence — no matter who you're trying to attract.


Like this post? There's more. Get tons of beauty tips, tutorials, and news on the Refinery29 Beauty Facebook page. Like us on Facebook — we'll see you there!
Beauty
Becca Cosmetics Is Closing In September — Here’s Everything...
Becca Cosmetics — the brand that brought many of us our first big-girl highlighters in college and one of the first that really taught us how to glow ?
by aimee simeon
Makeup
Bronzers That Actually Work For Medium, Dark, & Deep Complexions
by Us
Makeup
All The New Drugstore Makeup To Add To Your Stash In 2021
by aimee simeon
Most Wanted
These National Lash Day Deals Are Eye-Mazing
Even if you haven’t done a full beat in 365 days and counting, it’s likely that mascara is still a part of your daily glam routine — especial
by Karina Hoshikawa
Beauty
Priyanka Ganjoo Didn’t See A Space For South Asian Women In...
The founder of Kulfi Beauty is on a mission to replace cultural stigma with self-expression.
by aimee simeon
Beauty
We Tried The $11 Drugstore Mascara TikTok Is Obsessed With
Feta cheese isn’t the only thing going viral on TikTok lately: The hit-making social media platform also has makeup lovers scrambling to get their hands
by Caitlin Kenny
Most Wanted
I Tried ALL Of Halsey’s About-Face Makeup & Here Are The Co...
by Karina Hoshikawa
Makeup
This Black-Owned Beauty Brand Is Now At Walmart — & Better Than Ever
In 2012, The Lip Bar founder Melissa Butler was working as a financial analyst in New York City when, frustrated by the lack of inclusive, high-quality cos
by Rachel Krause
Beauty
Wearing Euphoria-Inspired Cloud Makeup Just Got A Lot Ea...
Even if you’ve never seen an entire episode of HBO’s Euphoria, you’re probably familiar with its two buzziest headliners: Zendaya (of cou
by Megan Decker
Somos Latinx
5 Latina-Owned Red Lipsticks That Deserve To Be Worn — Even En Casa
by Johanna Ferreira
Makeup
I Got An Ombré Powder Brow Treatment — & I’m Obsessed
We’re all familiar with the saying: Your eyebrows are supposed to be sisters, not twins. But for some of us, the arches of our brows are more distant
by Megan Decker
Beauty
I’m A Beauty Editor & This Is The Best Foundation I’v...
Since relaunching its beauty collection in 2019, Gucci has made headlines everywhere. The luxury brand’s first lipstick campaign divided opinion for
by Jacqueline Kilikita
Discover
R29 Stories & News
Watch
R29 Original Series & Films
Shop
R29's Most Wanted