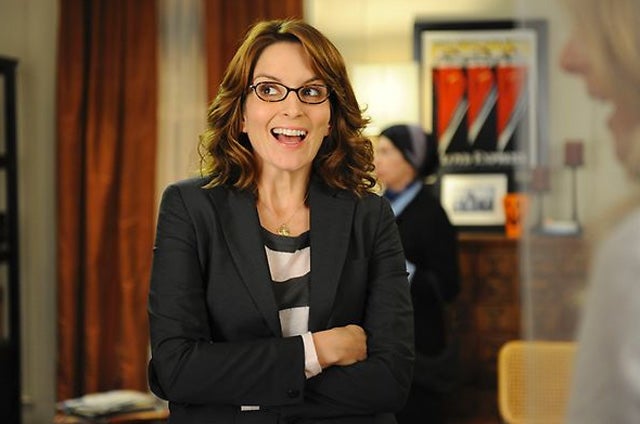 Photo: Courtesy of NBC.
People of the world, bow down: The true queen of television, the woman who melted our hearts and tickled our souls with her jokes and subsequent reaction GIFs, is back. Tina Fey is making a triumphant return to television after 30 Rock ended. In other news, Nietzsche recently awoke from death to retract his former statements regarding God and proclaim that yes, we have all been #blessed on this day.
Deadline reports that Fey and 30 Rock cohort Robert Carlock, along with writer/producer Colleen McGuinness, are working on a new female-centric comedy for NBC. The project will include Fey as an executive producer, and we sincerely hope she'll be joining McGuinness (who came to 30 Rock in season six) in the writer's room, too. So far, this is all we know: "The project, said to be in the vein of Cheers, is a character-driven workplace comedy where a young woman in search of reconnecting with her father finds a new home and family on Fire Island." For now, we're just going to assume this is some kind of flashback to the time Liz Lemon got tricked into joining Jenna on Mickey Rourke's sex yacht, of which Tracy is the captain, and hilarity ensued. That sounds like a win to us. (Jezebel)
Best of Netflix
Son Of Sam Killer David Berkowitz Keeps Changing His Story — Even...
Netflix’s new true crime series The Sons of Sam: Descent Into Darkness takes a closer look at a case that, in the late ‘70s, terrorized the city of New
by Shannon Carlin
TV Shows
Cruel Summer‘s Newest Twist Could Change The Course ...
Spoilers are ahead. Stories shape the world around us. And in a little meta-experiment Freeform’s Cruel Summer is crafting a story about stories. The
by Rosie Knight
Entertainment
Tristan Thompson Sends Cease & Desist Letters Amid Cheating Alleg...
After accusing Tristan Thompson of cheating on Khloé Kardashian with her, a woman named Sydney Chase, as well as the podcast she appeared on to share her
by Natalie Morin
Advertisement
Pop Culture
Ben Affleck’s “It’s Me” Video Has Nearly ...
Ben Affleck’s love life has once again made headlines, but the latest buzz about the actor isn’t even about his possible reunion with famous ex Jennife
by Ineye Komonibo
TV Shows
Eboni K. Williams Has No Problem Disrupting Whiteness On RHONY...
The Real Housewives of New York first premiered in 2008 as the highly anticipated east coast follow-up to the hot new Bravo reality series based in Orange
by Ineye Komonibo
TV Shows
Everyone’s Obsessed With Evan Peters’ Drunk Acting In...
There’s a scene in Mare of Easttown that the internet can’t stop talking about. It almost sounds like an accusation from the game Clue: Evan Pe
by Natalie Morin
Unbothered
We Created Hollywood’s New Inclusion Rider — Here’s Why It’s Just...
Fanshen Cox and Kalpana Kotagal co-authored the Inclusion Rider. Cox is the head of strategic outreach at Pearl Street Films and co-host of the Webby nomin
by Fanshen Cox
Celebrity Couples
Anna Faris Says She & Chris Pratt Were Trying To “Protect T...
When Anna Faris and Chris Pratt announced that they were going their separate ways in 2017, the news came as a shock because the world had only known them
by Ineye Komonibo
Movies
Shailene Woodley Has An Illicit Love Affair In Netflix’s The ...
This summer, sexy doesn’t mean crop tops and midnight texts — it’s flirty sun hats and heartfelt penmanship. Well, according to Netflix, at l
by Natalie Morin
Best of Netflix
Everyone Is At Home Watching These 10 Shows & Movies On Netflix R...
by Ineye Komonibo
TV Shows
Every Suspicious & Sympathetic Character In HBO’s Mare o...
by Shannon Carlin
Pop Culture
These Shows & Movies Get College Totally Right
by Elena Nicolaou
Advertisement
Advertisement
Discover
R29 Stories & News
Watch
R29 Original Series & Films
Shop
R29's Most Wanted