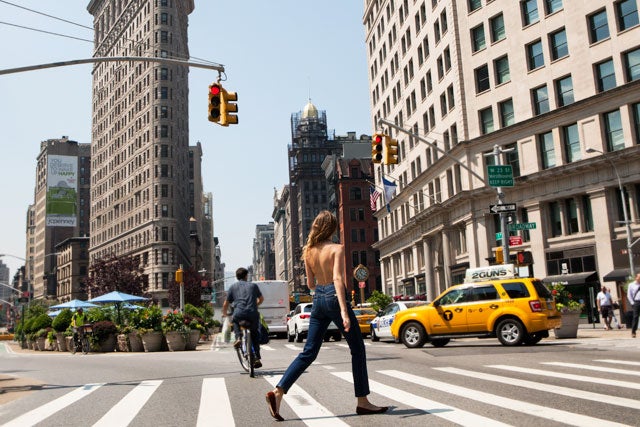 Photographed by Alexandra R. Gavillet
Elizabeth Siematkowski is a founder of ToplessbladingTM, the following is the first-person account of her maiden topless voyage across the Williamsburg bridge:
There’s no two ways about it: It’s been an abrasively hot NYC summer. So hot, in fact, that I’m tempted to take my shirt off and let it all hang out. Hell, guys do it! Indeed, when I spy a bare-chested man showing off his C-cup at the Brooklyn Flea or pushing his way through Times Square, it’s hard not to feel a dash of envy. But, that doesn’t need to be the case.
Newsflash, ladies: it’s legal to go topless in New York State. And exercising that right is quickly gaining popularity as a movement. To strip it down to the bare facts (sorry, couldn’t help it), here’s what you need to know: Penal law 245.01, which involves public indecency and exposure, was amended by the NY Supreme Court in 1992, ruling it legal for women to be topless in public under the grounds of gender equality (hollaback!). This law was amended six years after seven women were arrested in Rochester, NY for being topless in a public area and the 1992 case People vs. Ramona Santorelli and Mary Lou Schloss thrust the topless revolution into full-blown action. And yet, over a decade later, in 2005, Jill Coccaro, also known as Phoenix Feeley, was arrested on Delancey Street for leaving her shirt at home. After being detained for twelve hours, she later sued the city and was awarded $29,000 for her unwarranted arrest. Since then, advocacy groups like GoTopless have sprung up, launching Go Topless Day, while the Topfree Equal Rights Association was established in 1997, to aid women unlawfully charged for going topless.
Advertisement
Click the arrow below for more of the story on the next page. 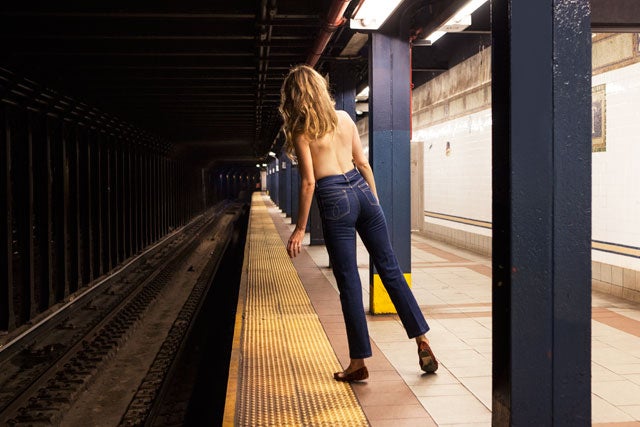 Photographed by Alexandra R. Gavillet
Clearly, though, the topless topic is in contention for more reasons than just the fine-print legalities. My personal vested interest in the topless movement came about when my cousin Rachael Yaeger, (founder of The Working Pair LLC, theworkingpair.com, a site for creative couples), and I decided to start ToplessbladingTM just a few months ago. It came about as I was laying out on my rooftop tanning, talking to Rachael about how rollerblading (my favorite thing to do on earth) isn’t socially acceptable any more. Nor was it socially acceptable to be topless, even in the scorching heat. I decided to combine the two. The next day she had created an Instagram account @toplessblading and the movement was born.
We wanted to make it official. So, I decided to kick it off by blading across the Williamsburg bridge — topless — and was serendipitously approached to write about it. Sure, it’s been brutally hot all month long, and I knew I was within my rights to do it, but the question of whether going topless was empowering to or degrading of women still weighed heavily on my mind. I sat on the curb at the base of the bridge strapping on my blades pondering, How would my Grandmother have felt about this? What would my dad’s reaction be to reading an article about me topless rollerblading over a public bridge? Am I disrespecting my family or myself? What will this mean for me as a young professional? A lot of questions about the larger ramifications of my actions, obviously all bound up in social norms and ideas around nudity, started to surface. As easy as it was to say I was all for this, when it actually came to doing it, I felt some anxiety.
Advertisement
There I was, tightening my last buckle at 6 a.m., with the sun creeping out across the sky, bringing the city into focus. In that moment, my brain cleared, I thought, "Let’s go," and threw my top off and rolled out. And I mean I was the bare-boobed, pure-flesh, no-pasties kind of topless. Granted, this may be more comfortable for some of us than others (depending on what we are working with), I myself am a fairly petite blonde with a solid B-cup, but regardless of size, build, or age, and the legalities is a deeper message of acceptance, love, and, of course, a whole lot of lady parts.
At first, all I could think was, "Whoa. Okay, I am actually doing this. There is no turning back now. What if I fall? What if someone says something offensive? What if I derail someone in the bike lane and someone on the J/M/Z records it, and it goes viral with a title like, ‘Boobie Trap! Topless Rider Goes Down’ or ‘Williams-boob Bridge Sees Chest-Out Collision'?" Yikes. But then, after the first few strides and a deep breath, I was able to unselfconsciously take in my surroundings; a distant sailboat floating along the East River, a motor boat or two getting an early start, and I began to forget myself. It started to feel like any other day of rollerblading, my blades pounding the pavement, my arms brushing lightly against my sides, except, of course, I was topless. It was actually an exhilarating, freeing feeling — the kind you get when you slip into the water for the first skinny dip of the season. I felt pure happiness and if my boobs had a voice, they would most likely be saying, “Yes, fresh air” as the wind coated me like the lingering fog on a few distant buildings. The air felt heavy as I breathed, but my body felt light and alive.
Advertisement
Click the arrow below for more of the story on the next page. 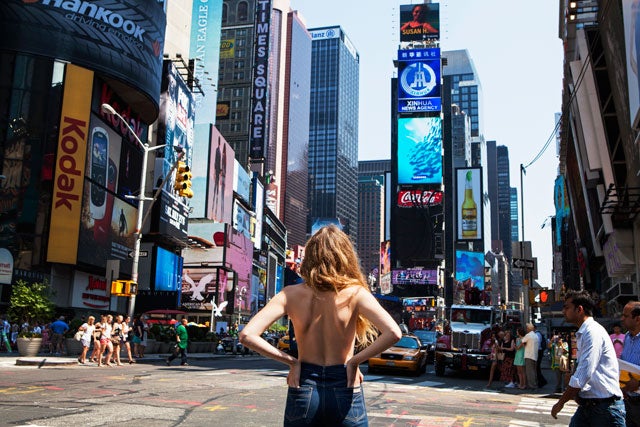 To my absolute bewilderment, the frenzy of attention and judgment that I had anticipated was actually anything but. Apart from two women — one who gave me a high five as she passed on her bike shouting “that’s awesome” and the other yelling “I want in” — nobody really even commented. Runner upon biker upon stroller upon driver passed by without so much as a second glance at me. I found myself repeating aloud, “Nobody cares — this is totally natural.” The shock value was null. I thought I would get a few sideways glances or a whistle or comments from a guy or two, but nada. The potential
objectifying feeling of being bare-chested rollerblading on a public bridge wasn’t there. The further I got, the more comfortable I became. I then realized, the more at ease I am with this, the more others will be as well. It was like any sexualized stigma or backlash I feared melted away the closer I got to the other side.

For me, rollerblading is about heart and soul, and doing something you love regardless of social norms, and being topless is about being a human. A spellbinding feeling of triumph and accomplishment swept over me as I bladed the last few strokes to the other side, where Rachael was waiting to see me, all of me, emerge. Her response was, “For some reason, this seems totally normal.” From there, I gave her a topless sweaty hug, and said, “Iced coffees?” Then I took my blades off, put my shirt on, and we proceeded to walk across the street to Dunkin’ Donuts. This was a small, but personally meaningful testament to the decades of blood, sweat, and boob-embracing advocacy that have gotten us to this point. My half-naked body wasn’t something to be judged or belittled or catcalled. I wasn’t the target of ridicule or the spectacle I had feared. I felt like just another person crossing the bridge, on another summer day, making my way from one end to the other.
It’s not so much about empowerment vs. degradation or right vs. wrong. It’s about having the choice to embrace my body the way I choose to. I’m not saying we should be exercising this right every single day, or that we all need to walk around topless in order to prove a certain comfort level when it comes to the female form. I’m just saying that it’s a beautiful thing that we can do, if we should choose to. Women are asked to fit into a lot of things ranging from skinny jeans to any number of social norms (and the two are certainly not mutually exclusive). But, when it comes to our bodies, we should have the freedom and strength to decide how we want to move through the world — shirts on or off.
Since her first trip across the bridge, Elizabeth continues to blade topless. She is a founder of ToplessbladingTM (@toplessblading), alongside business partner Rachael Yaeger (The Working Pair, LLC). ToplessbladingTM is a movement that takes the seemingly lost art of rollerblading and reinvents it with a topless twist. Join their 1,068 instagram followers to keep abreast of all the latest news, including a NYC Skate Marathon, 100k rollerblade marathon at the end of September.
29Rooms
29Rooms Is Back; Here’s How To Attend Safely
Over the past year and a half, we’ve missed many opportunities to attend concerts, festivals, parties, and hangs. And although restrictions have loosened
by R29 Brand Experie...
Somos Latinx
Dear Miya Ponsetto, You Can Be Latinx & Still Be A Karen
Miya Ponsetto, the white woman dubbed as “SoHo Karen” on social media, was forcibly arrested in California yesterday. Her arrest comes after sh
by Jasely Molina
Food & Drinks
Is A Bagel Really A Bagel If It Isn’t In NYC?
by Elizabeth Buxton
Advertisement
New York
We Dig This NYC Dim Sum
by Camille Coklow
Beauty
The 17 Most Epic NYC Massages
by Kayla Jacobs
Movies
11 Movies Perfect For A Glorious Snow Day
by Vanessa Golembewski
New York
You HAVE To Try The Avocado Toast At These NYC Restaurants
by Elizabeth Buxton
New York
The Absolute Best Spots To Slurp Ramen In NYC
by Zoe Bain
New York
The NYC Rooftops You Need To Hit This Summer
by Elizabeth Buxton
Beauty
The Best Cheap Haircuts In New York City
Choppa style, for cheap.
by Liesa Goins
New York
The Indie Bride-To-Be’s Guide To Dress Shopping In NYC
by Ashley Castanos
New York
Is This Really What The NYPD Thinks About Rape?
NYPD captain Peter Rose has angered rape advocates after saying “acquaintance rape” cases are not as serious as rapes committed by strangers.DN
by Shannon Carlin
Advertisement
Advertisement
Discover
R29 Stories & News
Watch
R29 Original Series & Films
Shop
R29's Most Wanted