Skip navigation!
Story from Entertainment News
Not only do we totally adore Kristen Wiig, but we're pretty sure she's one of the funniest, savviest actresses/comedians/people around right now. As such, we want nothing less than rainbows and lollipops and happily ever after for our dear sweet Kristen. But, sadly, it seems happily ever after isn't going to happen with Strokes drummer and (former) beau Fabrizio Moretti. The couple reportedly ended their 18-month relationship, although they're vowing to stay friends. No word has come out yet on just what caused the split, but we're guessing the old Hollywood time commitment issue came into play. Luckily for Wiig, her career is taking off big time right now, with upcoming appearances in Girl Most Likely, Anchorman 2, and The Secret Life of Walter Mitty. Here's to hoping she finds all the happiness she deserves. (Los Angeles Times) 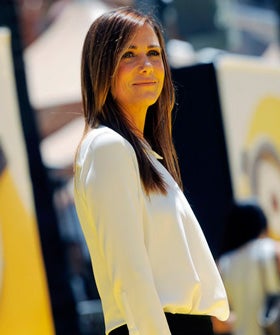