Skip navigation!
Story from New York
It's with heavy hearts that we report the death of Colin Devlin, owner and chef of several Brooklyn restaurants, including DuMont and DuMont Burger. The cause is an apparent suicide. Devlin, 42, is said to have taken his own life with a .38-caliber revolver that was kept at his second home in Pennsylvania, where he traveled yesterday afternoon after a meeting that brought news of potential financial troubles for his restaurants. (The once Michelin-starred Dressler closed last month, with a note to customers about new projects to come in Clinton Hill and Prospect Heights.)
Devlin was last seen yesterday afternoon leaving his Williamsburg home, distraught over a business-loan denial. His wife contacted police when she received an unsettling text message earlier today asking that she take care of their children. She told officials that her husband could likely be heading to their second home in Pennsylvania, and it was then that police were able to confirm that his car had in fact entered the Holland Tunnel at 3:15 p.m., just 45 minutes after he left Brooklyn. There was no note found in the car. (Gothamist) (Wall Street Journal) 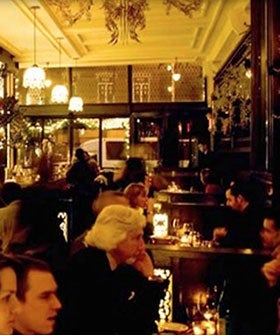 Photo: Courtesy of Gawker
Advertisement
Food & Drinks
Is A Bagel Really A Bagel If It Isn’t In NYC?
by Elizabeth Buxton
New York
We Dig This NYC Dim Sum
by Camille Coklow
Beauty
The 17 Most Epic NYC Massages
by Kayla Jacobs
Movies
11 Movies Perfect For A Glorious Snow Day
by Vanessa Golembewski
New York
You HAVE To Try The Avocado Toast At These NYC Restaurants
by Elizabeth Buxton
New York
The Absolute Best Spots To Slurp Ramen In NYC
by Zoe Bain
New York
The NYC Rooftops You Need To Hit This Summer
by Elizabeth Buxton
Beauty
The Best Cheap Haircuts In New York City
Choppa style, for cheap.
by Liesa Goins
New York
The Indie Bride-To-Be’s Guide To Dress Shopping In NYC
by Ashley Castanos
New York
Is This Really What The NYPD Thinks About Rape?
NYPD captain Peter Rose has angered rape advocates after saying “acquaintance rape” cases are not as serious as rapes committed by strangers.DN
by Shannon Carlin
US News
Why This New York Subway Mural Of A Gay Couple Is So Important
The New York subway system is making headlines this week, with the opening of its long-awaited Second Avenue line. One of the new stations along that line
by Sabrina Rojas Weiss
New York
7 Last-Minute Places To Eat Out If You’re In NYC On Thanksg...
For some New York City residents, “heading home for the holidays” means taking the 1 train back uptown to a tiny apartment and cooking a festiv
by Elizabeth Buxton
Discover
R29 Stories & News
Watch
R29 Original Series & Films
Shop
R29's Most Wanted