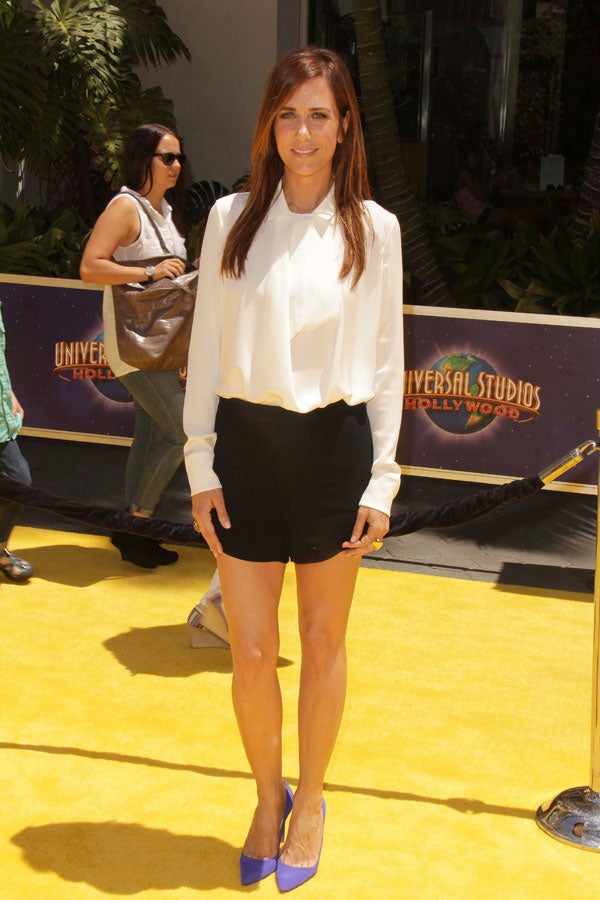 Leaving a comedy mainstay (and consistent paycheck) like Saturday Night Live might be considered a risk for some, but not for the irrepressible Kristen Wiig, who has stolen our hearts and is never giving them back. Ever since 2011, when Bridesmaids kickstarted her movie career and earned her an Oscar nom, she's been one of Hollywood's most sought-after, becoming more recognizable than her beloved characters (hello, Gilly!) who helped put her on the map. Right now, Wiig is partnering up with Steve Carrell to create our ultimate fantasy comedy dream team for Despicable Me 2, where she plays Lucy, a quirky Anti-Villain League agent who seems to be just as neurotic as Carrell's Gru. So we asked her what it was like to be in a kids movie, and her more, erm, adult plans for this year's most-anticipated comedy, Anchorman 2. (Yes! She spilled!)
Advertisement

“When I saw the movie, she’s very physical and kind of all over the place. I certainly didn’t do all of her moves. But sometimes when you’re recording certain action lines you have to kind of like do all the moves to get into it. So it is a little bit of physicality there. Plus, they’re recording you to get little facial expressions or body movement so it kind of captures and translates into animated stuff. There wasn’t a lot of room for movement.”

You’ve played characters who are romantically impaired. Where do you fall on the scale?

Talk about the score, since the music’s (from Pharrell) is fantastic.

“I’m one of those people that really pay attention to music in films and the first time I saw this movie, I thought, ‘Oh my gosh, it’s so different. It’s Pharrell and it’s modern. The music in the second one I think is so, so good. I think it’s just a smart choice to have him do the music. It kind of sets a different tone for the movie, it’s great. How do you not like Pharrell?”

Ultimately, it’s a kids’ movie. Are you cool with kids?

“That would be horrible if I was promoting this movie and I said that I hated kids. No, I love kids. All of my best friends have kids and I love, love, love kids.”

Have you reached your wacky peak?

“God, I hope not. It’s a fine line. I don’t know, now that I’m not on SNL, the chance to find those crazy characters won’t come around that much. That was like a weekly thing of being able to be really fearless and find those different voices and people. Actually, doing an animated movie is kind of the next best thing cause you can be big and broad and use different voices where you can’t really do that much in a live-action movie. But I hope I can continue to find more cause I really enjoy it.”

You seem reserved in public, how do you cut loose on the stage?

“I think a lot of people assume that you are the personality that they see you as on screen. You have to kind of separate who you are from it, a little bit. I’m not really reserved in real life. Maybe in a setting like this, maybe a little more so cause I’m talking about myself and I know that you’re writing everything down that I’m saying. So it is a little strange. When I’m with my friends, I’m obviously a little more relaxed. Yeah, it’s funny. I think people just assume that you’re that person. And it goes the other way, too. Like sometimes when I do interviews, people expect me to talk in different voices and things like that, and I’m really just kind of like a normal person.”

Concerning Anchorman 2: What is it like to come into an already established cast?

“Totally, completely flattering. Said yes before I knew. Anchorman is one of my favorite movies. I love all of those guys. I think it was my first day they were all there in their costumes, cowboy hat and vest and everything else. I was like, ‘Oh my gosh, I’m really here and that’s really them!’ I really kind of geeked out for a minute. I couldn’t believe I was there. And to be a part of it, it’s really surreal. I can’t wait to see it and have it come out.”

How crazy do you get to go in the movie?

“The movie’s pretty crazy. It’s like the first one. It’s kind of a little bit all over the place. It’s like, is it reality and what’s going on? I think if you liked the first one, you’ll like this one.”

Style
Precious Star Gabourey Sidibe Is Engaged — & Her Ring Is G...
On Tuesday, Precious and Empire star Gabourey Sidibe took to Instagram to announce that she is engaged to Brandon Frankel. While announcing the news, the a
by Eliza Huber
Style
Sophie Turner Wore Fall’s Biggest Outerwear Trend With Slip...
On Monday, Game of Thrones star and Louis Vuitton ambassador Sophie Turner took to Instagram stories to show off the contents of an unboxing: a pair of qui
by Eliza Huber
Style
From Gwen Stefani To Lily Collins: The Best Celebrity Engagement ...
by Eliza Huber
Fashion
16 Looks From The Crown Inspired By Princess Diana’s...
by Irina Grechko
Style
Lizzo, Harry Styles & AOC Are 2020’s Most Fashionable Celebrities
On Tuesday, fashion search engine Lyst released its 2020 Year In Review, which analyzed shopping data from over 100 million shoppers, from their searches t
by Eliza Huber
Style
Gwen Stefani Finally Gave Us A Glimpse At Her Engagement Ring
Update: On Sunday, Gwen Stefani and Blake Shelton had a “date night,” which the former gave us a glimpse of in her Instagram stories. The date was actu
by Eliza Huber
Style
Sophie Turner’s New Necklace Has A Secret About Baby Willa ...
In an Instagram story on Friday, Sophie Turner revealed a major hint about her and husband Joe Jonas’ daughter Willa, who, apart from her name, remains a
by Eliza Huber
Celebrity Style
No, Wearing A Dress Doesn’t Make Harry Styles Less “M...
F
by Elly Belle
Style
See J.Lo, Demi Lovato & More Stunners On The People’s Choice Awar...
by Eliza Huber
Style
Emma Corrin Channelled Princess Diana’s Style On The Crown...
by Eliza Huber
Style
Harry Styles’ Dress On The Cover Of Vogue Is A Sign Of The...
In an act of end-of-the-week kindness we needed, Vogue revealed its December cover star, featuring none other than “charm-heavy style czar” Harry Style
by Eliza Huber
Style
Eloquii Taps Plus-Size Hijabi Model Leah Vernon As The Face Of It...
This week, popular plus-size retailer Eloquii announced the launch of its first-ever tastemakers collection: a six-day event featuring drops of limited-edi
by Eliza Huber
Discover
R29 Stories & News
Watch
R29 Original Series & Films
Shop
R29's Most Wanted