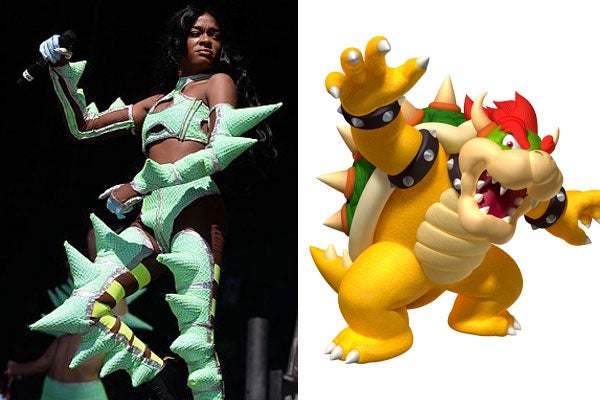 When one decides to walk out of the house with a suit of armored-but-plush spikes adorning their body, it's necessary to give props where props are due. But long gone are the days of the MAC-wearing, Alexander Wang-approved Azealia Banks; Yung Repunxel seems to have gone from sea punk to sea urchin, spiny protrusions included. Clearly, this iteration of Banks is festival-only: Her recent outfits have been over the top and costume-y (as opposed to the chic leather number she wore, say, at our Fashion Week party). While Azealia doesn't quite have the same in-demand status she had back after "212" dropped, her festival-circuit appearance is allowing her to take the stage at some pretty major events.
Clearly, playing at a summer concert wearing netted spikes and spandex certainly makes a statement. Even if that statement is a little boss-battle Bowser meets Paris Is Burning. (Which isn't a bad thing. We think...)

Style
Precious Star Gabourey Sidibe Is Engaged — & Her Ring Is G...
On Tuesday, Precious and Empire star Gabourey Sidibe took to Instagram to announce that she is engaged to Brandon Frankel. While announcing the news, the a
by Eliza Huber
Style
Sophie Turner Wore Fall’s Biggest Outerwear Trend With Slip...
On Monday, Game of Thrones star and Louis Vuitton ambassador Sophie Turner took to Instagram stories to show off the contents of an unboxing: a pair of qui
by Eliza Huber
Style
From Gwen Stefani To Lily Collins: The Best Celebrity Engagement ...
by Eliza Huber
Fashion
16 Looks From The Crown Inspired By Princess Diana’s...
by Irina Grechko
Style
Lizzo, Harry Styles & AOC Are 2020’s Most Fashionable Celebrities
On Tuesday, fashion search engine Lyst released its 2020 Year In Review, which analyzed shopping data from over 100 million shoppers, from their searches t
by Eliza Huber
Style
Gwen Stefani Finally Gave Us A Glimpse At Her Engagement Ring
Update: On Sunday, Gwen Stefani and Blake Shelton had a “date night,” which the former gave us a glimpse of in her Instagram stories. The date was actu
by Eliza Huber
Style
Sophie Turner’s New Necklace Has A Secret About Baby Willa ...
In an Instagram story on Friday, Sophie Turner revealed a major hint about her and husband Joe Jonas’ daughter Willa, who, apart from her name, remains a
by Eliza Huber
Celebrity Style
No, Wearing A Dress Doesn’t Make Harry Styles Less “M...
F
by Elly Belle
Style
See J.Lo, Demi Lovato & More Stunners On The People’s Choice Awar...
by Eliza Huber
Style
Emma Corrin Channelled Princess Diana’s Style On The Crown...
by Eliza Huber
Style
Harry Styles’ Dress On The Cover Of Vogue Is A Sign Of The...
In an act of end-of-the-week kindness we needed, Vogue revealed its December cover star, featuring none other than “charm-heavy style czar” Harry Style
by Eliza Huber
Style
Eloquii Taps Plus-Size Hijabi Model Leah Vernon As The Face Of It...
This week, popular plus-size retailer Eloquii announced the launch of its first-ever tastemakers collection: a six-day event featuring drops of limited-edi
by Eliza Huber
Discover
R29 Stories & News
Watch
R29 Original Series & Films
Shop
R29's Most Wanted