Skip navigation!
Story from Celebrity Style
Anna Kendrick is on a winning streak. First, she won our hearts in Pitch Perfect (a movie that, while you may have been introduced to it by a 12-year-old, doesn't fail to charm). Then she further capitalized on that love with this music video. Oh, and then there was the K-Pop. And don't forget about this cuteness. Clearly, we could go on.
But the latest Kendrick fangirl rumor has the star playing Cinderella in an upcoming film adaptation of beloved musical Into The Woods. If it's true, she'll be alongside Emily Blunt, James Corden, Jonny Depp, Chris Pine, Jake Gyllenhaal, and Meryl Streep — the very definition of an all-star cast. Plus, it's being directed by Rob Marshall, who previously pulled off Chicago with aplomb. Entertainment Weekly reports that she's currently in talks with producers, but no real word yet on if it'll actually happen. This would be our dream role for Kendrick — and we have to imagine it looks pretty good from her end, too! (The Huffington Post) 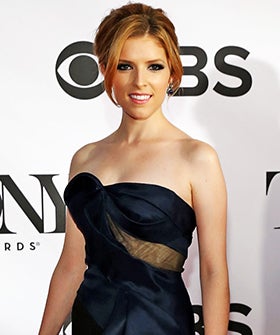 Advertisement
Celebrity Style
From Matching Sweatsuits To Custom Louis Vuitton — Sophie Turner&...
by Eliza Huber
Celebrity Style
All The Best Looks From The 2020 BRIT Awards
by Us
Models
Paloma Elsesser Is Just Getting Started
Paloma Elsesser is having one hell of a month. It started with Copenhagen Fashion Week, where the 27-year-old model walked in Ganni’s now-viral fall ‘2
by Eliza Huber
unstyled
Get Ready, Because Jane Fonda’s Latest Act Is Already Her Biggest...
Jane Fonda, the two-time Oscar winner, fitness empire entrepreneur, multi-bestselling author, and producer has been upending convention for the past six de
by Cait Munro
Style
The Jewelry That Deserved A Closer Look From Last Night’s O...
by Sara Radin
Celebrity Style
Billie Eilish Made A Case For Wearing Plush Leisure Suits Out Of ...
Billie Eilish, winner of five Grammy awards and lover of slime green, made an unexpectedly understated appearance at the Oscars last night that she attende
by Sara Radin
Fashion
Diane Keaton’s Oscars Look Thinks A Long Walk Around The Pa...
Diane Keaton’s on-screen looks are legendary. She wore menswear with ease for her role as Annie Hall in 1977, made the turtleneck-and-pantsuit a decade-l
by Eliza Huber
Oscars
The Ultimate Fashion Guide To The Oscars Red Carpet
by Eliza Huber
Fashion
We Happen To Love Kristen Wiig’s Red Carpet Lasagna Dress
Our favorite funny woman Kristen Wiig is usually noticed for her monotone quips and impressions of Target check-out cashiers. But, at the 2020 Oscars red c
by Leora Yashari
Fashion
The Secret Meaning Behind Natalie Portman’s Red Carpet Cape
Natalie Portman has been a long-time spokesperson for Dior, often showing up on red carpets wearing beautiful duds by the esteemed luxury house. For the 92
by Sara Radin
Fashion
The Cast Of Little Women Stunned On The Oscars Red Carpet
by Sara Radin
Fashion
Janelle Monáe Steals The Red Carpet Show Wearing A Sparkly Hood D...
Little red riding who? Janelle Monae, the ultimate multi-hyphenate and a 2020 Academy Awards performer, appeared on the Oscars’ red carpet in a head-to-t
by Sara Radin
Discover
R29 Stories & News
Watch
R29 Original Series & Films
Shop
R29's Most Wanted