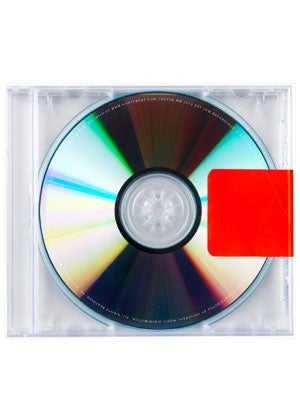 Yes, we understand that lyrics are never meant to be read literally. AC/DC wasn't actually promising us blood, Carly Rae Jepsen didn't in fact want us to call her, and Britney didn't intend to encourage you to hit her again. But for a rapper as heart-on-sleeve, soul-baring as Kanye West, his grit and anger adds another layer to his personal life — and his increased disillusionment with where it may be heading.
As soon as Kanye's BFF's daughter was born, Jay-Z excitedly turned her into an immediate pop-star, sampling Blue Ivy's innocent coos on "Glory." This is not to say that this automatically makes Jay-Z a great father and that every musical-making dad should immediately make songs about his kids, but Kanye himself points out the difference between he and his bestie in this now-infamous New York Times' article, saying: "I’m always the one that’s in a darker mood." He's got an anger in him that Jigga doesn't possess, and that anger is aimed at everything: From his relationships (current and past) to America.
Advertisement
On Yeezus, Kanye's intense, heavy, bombastic album out tomorrow, there is no warmth, and no sign of a 'Ye touched by love. Gone is the bravado of having claimed Kim Kardashian over her ex-husband (like in "Theraflu," where Kanye says, "And I'll admit, I had fell in love with Kim /Around the same time she had fell in love with him /Well that's cool, baby girl, do ya thang /Lucky I ain't had Jay drop him from the team"). In fact, there is no sense of impending fatherhood or a Kanye softened. If anything, he seems to completely reject anything that Kim Kardashian comes to stand for: American prosperity, "cohesive" family, and a close relationship with the media.
Instead, Kanye is full of spitfire, with maniacal, sparse beats and heavy (hyper-autotuned) vocals accusing American media of racism and sensationalism. Sure, he name-drops Louboutin, Alexander Wang, and car brands a-plenty, but he also talks about "throwing his Maybach keys" and reminisces, over and over again, about his pink polo days. In fact, much of the album is an indictment of consumerism — the very thing that Kim Kardashian has come to embody, with her endless licensing and endorsement deals. True, Kanye believes in labels, name-dropping, and materialism in a crass way, but he calls out even himself in "New Slaves," angrily spitting, "So go and grab the reporters /So I can smash their recorders." This claim is on the exact opposite spectrum of the transparent Kardashian ethos. 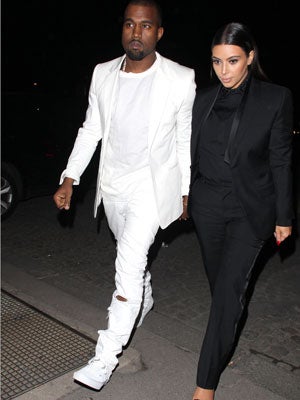 Since this album was produced so quickly — in only a few months — 'Ye certainly knew that he was going to be a dad when he went into the studio. Yet, the only time the idea of a family enters the picture is in the explicit, pulsating funeral dirge of "I'm In It," when the tense, grinding rhymes give way to him rapping, "Uh, the kids and the wife life /Uh, but can't wake up from the night life/ Uh, I'm so scared of my demons /Uh, I go to sleep with a night light."
If anything, Kanye's romantic leanings seem to be referencing Alexis Phifer, his longterm on-and-off-again girlfriend — specifically in "Hold My Liquor" ("Okay, I smashed your Corolla, I'm hanging on a hangover, Five years we been over, Ask me why I came over") and then again on "Guilt Trip," which ends with a sad-sounding Kid Cudi singing, "If you love me so much then why'd you let me go?" (His references are literal, actually referencing their break-up date.)
Yet, it is in his opening song, a jarring '90s-era-NIN-style song, that reminds listeners that he's not engaged in the type of silly pandering to the populace that Keeping Up With The Kardashian's has become renowned, stating over and over again: "How much do I not give a f**k? Let me show you right now before you give it up."
Does this mean that Kanye West and Kim Kardashian are doomed? Who knows: It's interesting that Kanye is using his most vocal platform to, in many ways, throw his current partner under the so-called bus. Naturally, there is artistic license and metaphor, but Kanye is many things — and subtle isn't one of them. While speculating on the nature of KimYe's relationship is impossible for an outsider, it is fascinating to note that Kim makes Kanye a part of her packaged narrative, while all Kanye has to say is, "And hey, ayo, we made it, Thanksgiving /So hey, maybe we can make it to Christmas /She asked me what I wished for on the wishlist /Have you ever asked your b**** for other b*****s? /Maybe we could still make it to the church steps /But first, you gon' remember how to forget." Hey, don't forget: There is no church in the wild.
Photo: Beretta/Sims/Rex/Rex USA.
Unbothered
What Black Creators Can Learn From Signed, Blake
S
by Venesa Coger
Style
This Reformation Dress Sold Out After Taylor Swift’s TikTok Debut...
Taylor Swift made her TikTok debut on Monday in a big way. First, she announced that Red (Taylor’s Version), the re-released edition of her 2012 album Re
by Eliza Huber
Style
Zoë Kravitz Wore The Perfect Summer Dress — & Yes, It’s Still Ava...
If you spent the entire weekend thinking about Zoë Kravitz and Channing Tatum’s rumored relationship after the two were spotted sipping iced coffees tog
by Eliza Huber
Advertisement
Beyonce
Beyoncé Channeled Audrey Hepburn In A 128-Carat Diamond Necklace
One of Breakfast at Tiffany’s most memorable scenes features Holly Golightly (Audrey Hepburn) singing Henry Mancini’s “Moon River” while strumming
by Frances Solá-Sant...
Style
Katie Holmes’ Latest Look Includes A J.Lo-Approved Quarantine War...
Like us, Katie Holmes wants to dress like J.Lo. This week, the Dawson’s Creek alum was spotted strolling through downtown Manhattan, wearing a black Cham
by Eliza Huber
Engagement Rings
We Finally Caught A Glimpse Of Sophia Bush’s Square-Cut Eng...
It’s been a week since Sophia Bush made her engagement to entrepreneur Grant Hughes Instagram official. Now, she’s showing off her ring.  On Tuesd
by Frances Solá-Sant...
Style
Rihanna Wore Ripped Low-Rise Jeans With Pearls At The Supermarket
Now this is a billion-dollar look. On Sunday, Rihanna was spotted leaving her local New York City Whole Foods wearing the ultimate high-low ensemble. On th
by Eliza Huber
Style
Megan Fox Wore A Pin Top With Summer’s Most Ubiquitous Trend
With stamps of approval already pressed and sealed from Bella Hadid, Hailey Bieber, and Ariana Grande, it was only a matter of time before another celebrit
by Eliza Huber
Style
Rihanna Wore TikTok’s Favorite Going-Out Top With Low-Rise ...
Rarely does Rihanna succumb to fads, likely because she’s often the one starting them. Yet, the billionaire fashion-beauty mogul’s latest look featured
by Eliza Huber
Unbothered
Ciara On Being A Mom, A Mogul & Married To Russell Wilson: “It’s ...
As the world slowly reopens, it’s no secret that everyone has been struggling to figure out how to live in this (almost) post-pandemic reality and get ba
by Maiya Carmichael
Beyonce
Beyoncé’s Harper’s Bazaar September Cover Is A Tribute To ...
Less than a week after releasing a cowboy-inspired campaign for her athleisure line Ivy Park, Beyoncé now graces the three cover versions of Harper’s Ba
by Frances Solá-Sant...
Celebrity Style
Meghan Markle Wore The Perfect Work-From-Home Outfit
Meghan Markle seems to have a solution to the work-from-home outfit struggle we’ve all endured for the past year.  On Wednesday, the Duchess of Suss
by Frances Solá-Sant...
Advertisement
Advertisement
Discover
R29 Stories & News
Watch
R29 Original Series & Films
Shop
R29's Most Wanted