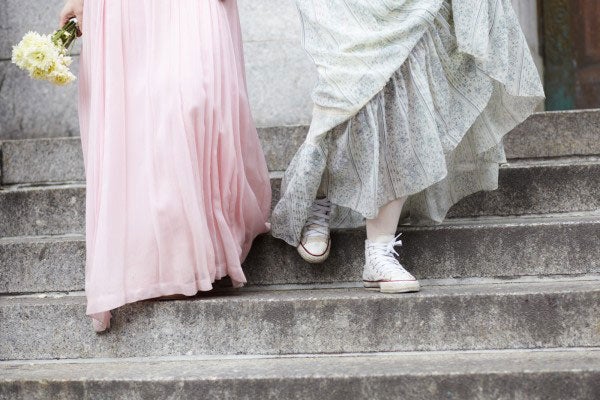 New York City's Michael Bloomberg has some pretty moving words for London politicians, especially since he has so strongly backed his constituents' embrace of gay marriage. According to NYC's mayor, as long as government maintains the responsibility of administering marriage licenses, there ought to be equal treatment. Stating that he understands the concerns that the current Parliament might be dealing with — fear of loss of religious freedoms or whether or not "civil union status" is enough for same-sex couples, he straightforwardly argues, "In the end, a majority of our legislators agreed that civil unions would relegate same-sex couples to second-class status — and that in approving marriage licenses, government should not discriminate between sexes."
His honest and revealing essay published in the Guardian frankly addresses concerns of those people who might not be opposed to gay marriage for social reasons, but instead, for political ones. Bloomberg points out that there are wonderful business incentives for welcoming more diverse families, and that, when Obama endorsed same-sex marriage, Americans didn't vote him out of office. In his simple clearcut piece, the most compelling reason Bloomberg gives is because it means being on the right side of history: "Among younger Americans, (the decision) isn't even close: more than 80% of 18- to 29-year-olds support the freedom to marry. They will define the future. And just as young civil-rights activists in the 1950s and 1960s ended decades of discriminatory laws against African-Americans, today's young people will do the same for gays and lesbians." If civil liberties isn't enough of a reason, then we don't know what is. (The Guardian)
Somos Latinx
Dear Miya Ponsetto, You Can Be Latinx & Still Be A Karen
Miya Ponsetto, the white woman dubbed as “SoHo Karen” on social media, was forcibly arrested in California yesterday. Her arrest comes after sh
by Jasely Molina
Food & Drinks
Is A Bagel Really A Bagel If It Isn’t In NYC?
by Elizabeth Buxton
New York
We Dig This NYC Dim Sum
by Camille Coklow
Beauty
The 17 Most Epic NYC Massages
by Kayla Jacobs
Movies
11 Movies Perfect For A Glorious Snow Day
by Vanessa Golembewski
New York
You HAVE To Try The Avocado Toast At These NYC Restaurants
by Elizabeth Buxton
New York
The Absolute Best Spots To Slurp Ramen In NYC
by Zoe Bain
New York
The NYC Rooftops You Need To Hit This Summer
by Elizabeth Buxton
Beauty
The Best Cheap Haircuts In New York City
Choppa style, for cheap.
by Liesa Goins
New York
The Indie Bride-To-Be’s Guide To Dress Shopping In NYC
by Ashley Castanos
New York
Is This Really What The NYPD Thinks About Rape?
NYPD captain Peter Rose has angered rape advocates after saying “acquaintance rape” cases are not as serious as rapes committed by strangers.DN
by Shannon Carlin
US News
Why This New York Subway Mural Of A Gay Couple Is So Important
The New York subway system is making headlines this week, with the opening of its long-awaited Second Avenue line. One of the new stations along that line
by Sabrina Rojas Weiss
Discover
R29 Stories & News
Watch
R29 Original Series & Films
Shop
R29's Most Wanted