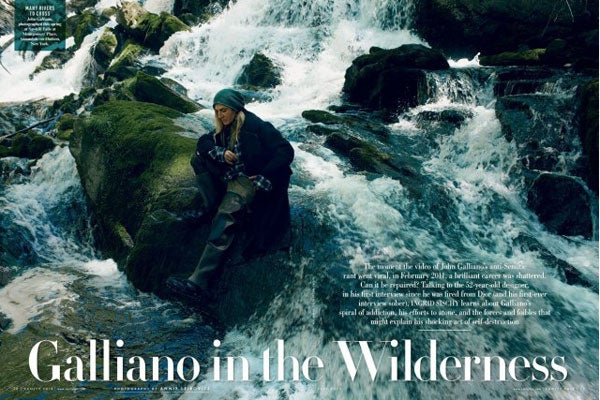 The game changed two years ago when John Galliano spat hateful slurs at patrons in a French café. Not only did one of the most revered and successful designers in fashion's history secure his fall from grace, but an ugly underbelly of fashion was exposed. Condemning these remarks not only was a social responsibility on Dior's behalf, but a business one, as well.
Say what you will about the two years that have followed, but one thing is for certain: John Galliano has hidden himself from public view. He neglected to take an "apology tour" or pen a tell-all; he really receded from fashion's eye, emerging only to work on his good friend Kate Moss' wedding dress, a gesture that he now cites as being one that saved him. “Creating Kate’s wedding dress saved me personally because it was my creative rehab. She dared me to be me again," he responds.
Advertisement
Galliano's words will undoubtedly echo throughout his legacy, one that is punctuated with flashes of mania and destruction, but also with the unmistakable mark of genius. In a move of self-reflection, it is this mania and destruction that Galliano talks about in his first interview since he was fired from Dior, telling Vanity Fair, “It’s the worst thing I have said in my life, but I didn’t mean it. . . . I have been trying to find out why that anger was directed at this race. I now realize I was so f**king angry and so discontent with myself that I just said the most spiteful thing I could.”
While the just-released Vanity Fair piece is only a snippet of a larger article, the depth of how far Galliano feels he fell is unmistakably clear, and he remarks that, at the rate he was going, he would have ended up in an insane asylum (or dead), and that he had lost all connection with reality. “What had started as self-expression turned into a mask. I lived in a bubble. I would be backstage and there would be a queue of five people to help me. One person would have a cigarette for me. The next person would have the lighter. I did not know how to use the A.T.M.” Somewhat admirably, Galliano says he is still figuring the amount of pain he has caused people, even now.
The world of fashion is now faced with a decision, as Galliano takes his first tentative steps back into the current conversation — is it possible to forgive such ugliness, especially when that ugliness is now so clearly attached to his name? Does being in pain and consumed by addiction ever excuse real, vitriolic racism? Can, or should, the accomplishments of a thirty-year career be diminished by a creator's personal life? These are hard decisions, and it seems, for now, Galliano is asking the hard questions. Let's see who is listening. (Vanity Fair)

Style
Meet The 25-Year-Old Designer Turning Tablecloths & Tea Towels In...
No trend has stolen the sartorial spotlight in 2021 quite like corsets. It began with the wildly popular Regency-era series Bridgerton causing a 123% spike
by Eliza Huber
Designers
Valentino’s Couture Show Featured Statement Sleeves & Colorblocking
The return of in-person fashion shows these past few weeks, for Paris’ Haute Couture Week, has confirmed that, a year and a half after the pandemic f
by Frances Solá-Sant...
Style
Phoebe Philo Is Back In Fashion With Her Own Brand
Following a three-plus-year hiatus from fashion, Phoebe Philo is back. According to Business of Fashion, the former Céline (turned-Celine) creative direct
by Eliza Huber
Advertisement
Designers
To Make Couture History, Pyer Moss Celebrated The Past
The Pyer Moss Fall 2021 Couture show made headlines before it even began. On Thursday, members of the press, friends of the New York-based brand, and celeb
by Irina Grechko
converse
The Telfar x Converse Gym-Ready Collab Is Here
Update: The Telfar x Converse collaboration is now available to shop on telfar.net. This story was originally published on June 29, 2021. Telfar is steppin
by Frances Solá-Sant...
Style
Chanel’s Couture Show Featured Margaret Qualley In A Weddin...
On Tuesday, Once Upon A Time… In Hollywood star Margaret Qualley took a trip down the aisle for Chanel’s fall ‘21 Haute Couture show. For the show’
by Eliza Huber
Birkenstocks
Birkenstock’s New Collab Features A Ballet Flat Version Of Its “U...
Everyone’s favorite ugly sandal brand is getting the Jil Sander treatment. On Thursday, Birkenstock released a collaboration with the luxury fashion hous
by Frances Solá-Sant...
Style
Forget Jackets: According To Marc Jacobs, Puffer Hoods & Gowns Wi...
On Monday, both in the hallowed halls of the New York Public Library and projected on the exterior walls of Bergdorf Goodman, Marc Jacobs revealed his fall
by Eliza Huber
Designers
Prabal Gurung Responds To Accusations That The Brand Erased An AA...
Designer Prabal Gurung responded to accusations that his namesake brand photoshopped an Indigenous land recognition sign from two images in its Resort 2022
by Frances Solá-Sant...
Designer Collaborations
H&M x Brock Collection Is Here — Shop Every Look Now
by Frances Solá-Sant...
Designers
Prabal Gurung’s New Collection Is A Look Back At The Y2K Party Scene
Update: Following the publishing of this article, people on Twitter have pointed out that Prabal Gurung erased an Indigenous land recognition sign from two
by Frances Solá-Sant...
Style
Is This Little Black Box The New Little Black Dress?
QR codes found success during the pandemic when little else did. They replaced paper menus, credit and loyalty cards, and, in some cases, physical proof of
by Eliza Huber
Advertisement
Advertisement
Discover
R29 Stories & News
Watch
R29 Original Series & Films
Shop
R29's Most Wanted