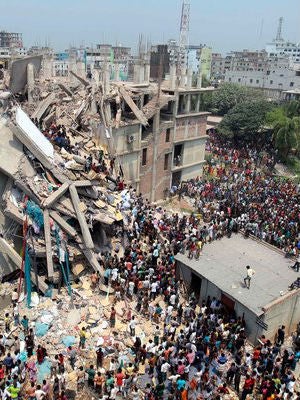 Retailers and consumers are still feeling the heat more than a month after the horrific collapse of Rana Plaza in Bangladesh that killed over 1,000 factory workers, but it looks like change is on the horizon. Not only are the fast-fashion companies pledging to provide support and looking into their respective processes to prevent future incidents, consumers are also taking labels more seriously. Well, it's about time, people.
According to a study by Harris Interactive, a Rochester, New York-based research firm, two in five Americans who are aware of the Rana Plaza collapse are less likely to purchase clothes made in Bangladesh. From the pool of 2,052 American adults surveyed, 39 percent said they were less likely to buy items made in Bangladesh. However, a whopping 52 percent said the collapse had no effect on their shopping habits. It's slightly surprising that only 39 percent of those surveyed said they'd change their shopping habits, but we can see why it'd be hard to resist a trendy $10 dress to wear once on a night out. We get it — people are creatures of habit and habits are hard to change, but changes need to be made, nonetheless.
Get the ball rolling, educate yourselves about ethical initiatives like Green Carpet Challenge, the Clean Clothes Campaign, or Labour Behind The Label, and most importantly, spread the word. (Harris Interactive)

Photo: Via The NYTimes.

Workout Clothes
The Whole Outdoor Voices Squad Is Joining The Cyber Monday Frenzy
Despite having skipped our workouts in favor of hunkering down on the couch over the last few days. We still feel like winners. Activewear brand Outdoor Vo
by Emily Ruane
Black Friday
We Found 50 Crowd-Pleasing Gifts On Sale
by Marissa Rosenblum
Cyber Monday
55 Cyber Monday Deals Refinery29 Editors Are Adding To Cart
by Mercedes Viera
Advertisement
Most Wanted
A Running List Of Cyber Monday Bedding Deals You Will Actually Wa...
Every year, without fail, Cyber Week bedding deals are unleashed on the susceptible sale-thirsty masses — giving us all the nudge we didn’t need to
by Lydia Wang
Amazon
Your Cheat Sheet To Amazon’s Best Cyber Monday Deals
We hope you didn’t spend all your monies last week because Cyber Monday at Amazon was worth waiting (and saving up) for. As part of its grand Cyber W
by Karina Hoshikawa
Plus-Size Fashion
We Sussed Out The Best Plus-Size Cyber Monday Deals At Madewell
Super Sale Alert: There’s a good chance items featured in this story are currently on sale for Cyber Monday. For more need-to-know details on this ye
by Chichi Offor
Deals
Nordstrom’s Cyber Monday Deals Just Keep Getting Better
Cyber Monday and its highly anticipated discounts are finally here, and Nordstrom just did you a shopping solid. The reader-favorite retailer got the post-
by Mercedes Viera
Designers
Virgil Abloh Is A Reminder That Fashion’s Most Prolific Designers...
Barrier-breaking designer. Genre-bending artist. Visionary. These are some of the ways people have described Virgil Abloh after it was announced that the 4
by Irina Grechko
Black Friday
Thanks To Parachute’s Cyber Monday Sale, Your Coziest Home ...
Black Friday might be over, but rest assured: The best sales of the year are not. Luxury bath and bedding company Parachute is offering 20% off everything
by Lydia Wang
Deals
A Hit List Of Cyber Monday’s Savviest Tech Deals
The smartest savings of the year — literally — are here just in time for the holiday season. We’re talking smart speakers, smartwatches, and even
by Lydia Wang
Black Friday
These Are The 24 Best Plus-Size Cyber Monday Deals
If you are like me, a little retail therapy or the possibility of scoring big on items from my clothing wish list sparks Marie Kondo-esque levels of joy. W
by Chichi Offor
Cyber Monday
Psst, Cyber Monday Sale Alert: Everything At Madewell Is 30% Off
by Ray Lowe
Advertisement
Advertisement
Discover
R29 Stories & News
Watch
R29 Original Series & Films
Shop
R29's Most Wanted