"New york, new york. Big city of dreams, but everything in new york aint always what it seems."

On August 25, 2009, Adam Goldstein tweeted a melancholic, ominous message to his followers. It was the last time he tweeted, three days later he was found dead of an accidental drug overdose brought on by a history of depression. Then, Charlie Sheen went on a manic media blitz in the winter of 2011, and it took him only one day on Twitter to gain a million followers, each one thrilled to witness the frantic and somewhat curious "#tigerblood" and "#winning" rants. Another example of a moment where the collective Internet-dwelling populace held their breath was during Kanye's Donda-gate, where the rapper went on an hour-long rant about his idea to start a design collective or school (it was unclear) called Donda, after his mother. Then, of course, we've all read, followed, or talked about Amanda Bynes, the likable star of She's The Man and Easy A who has suddenly become tabloid fodder, flinging bongs (or "bongs") and wearing wigs in court.
Advertisement
All four of these instances are diverse and have different implications — a death, a crazed rant, a desperate plea to be liked, and a meltdown, but they share one common trait: Each one was a direct, unmediated, and unfiltered look into a celebrity's psyche. No publicists, no press releases, and no paparazzi lenses with which to view this intense/sensitive/destructive moment, a moment which belonged to people we (as the public) are so used to seeing filtered through images, film, or music. 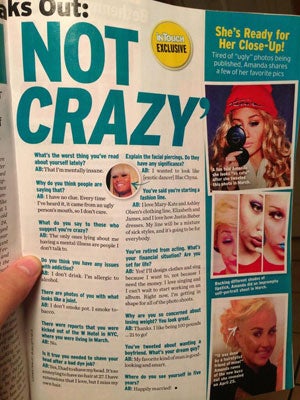 Up until quite recently, every time the pressures of fame exacerbate a celebrity's mental state, the public at large only receives snaps and moments from manic descent. One of the most iconic images of the aughts was the upsetting, crazed photo of Britney Spears with a shaved head, wielding an umbrella at paparazzi. Imagine, of course, if Spears would have had access to Twitter during her meltdown? (Or don't. The thought is kind of disturbing.) But now, with a direct link to fans via social media (or the decision to forgo a middle person), we literally get actual, unmediated 'postcards from the edge.'

The appeal to Twitter, especially for those who feel disconnected from a sense of community, can be strong.
Psychology Today
brings up an excellent point about the social and emotional effects of the microblogging site. "Twitter aims primarily at social needs, like those for belonging, love, and affection," author Moses Ma suggests. In fact, the piece goes on to suggest that Twitter is capable of making someone feel like they are fulfilling several of Maslow's higher level hierarchical needs, specifically community, self-esteem, and even self-actualization. Ma writes, "Using Twitter suggests a level of insecurity whereby, unless people recognize you, you cease to exist. It may stave off insecurity in the short term, but it won't cure it."

Yet, researchers have proven that an increased reliance on social networking (like, say, an obsessive usage of Twitter), can actually lead to larger, anti-social behavior. According to a study done by the University of Maryland, "The cell phone directly evokes feelings of connectivity to others, thereby fulfilling the basic human need to belong." The result is a bit of an ouroboros — people use Twitter in order to feel connected and self-assured, but an increased consumption of (or, say, addiction to) social networking can leave a user feeling more isolated than ever.
Advertisement

Endless publications are trying to figure out what is wrong with Amanda Bynes, including (reportedly) her parents. While it is clear that she is going through a rough time (when Courtney Love tells you to pull it together, it's not a good sign), we'd posit that Bynes is turning to Twitter for the emotional feedback it is giving her — as non-Bynes expert Chrissy Teigen points out below.

The fact that Amanda Bynes has any "support" to retweet is really unsettling.

Teigen has a point, however. Since her "meltdown" has begun, there have been a consistent, even gleeful group of followers to retweet and encourage Bynes, reveling in the type of joy her pain brings (otherwise known as schadenfreude). It appears as if Bynes is caught in an emotional feedback loop, on a social-networking site that's entire purpose is to remove the filter between the persona and the audience, and where gratification occurs when someone is successfully the object of attention — even if that attention isn't always positive.

You must be doing it right @amandabynes

If this wasn't enough to accelerate an underlying mental issue, we could speculate it certainly encourages the speed of a descent — and the manic joy with which Twitter watches.
What happens when managing your "brand" or interacting with your audience becomes a legitimate form of communication? Or that a celebrity breakdown, an understandable event given the pressure of being famous, is something that the public can now witness in real-time? What will stop that infinite, self-actualizing loop that both affirms a famous individual's personhood (see: Maslow's hierarchical needs) while also creating spectacle that will inspire attention and support? Will young celebrities (or, heck, even young people) without an intact emotional network turn to increasingly odd behaviors, or is this just an instance of a young person in distress suffering from something more serious? For that last part, we'd hazard a guess that the answer to both is yes.
Style
31 Looks To Jumpstart Your Summer Style
by Eliza Huber
Style
27 Black Influencers That You Should Be Following
by Eliza Huber
Style
Sophia Bush Is Selling A Look From One Of Her “Absolute Fav...
Like many of us, Sophia Bush is using her free time in quarantine to Marie Kondo her wardrobe, but, unlike the items gathering dust in the back of our clos
by Eliza Huber
Style
Hailey Bieber’s Reformation Dress Is Perfect For Summer — &...
This year Memorial Day Weekend wasn’t all parades and barbecues like we’re used to, but, even with the change of plans, Hailey Bieber found not one, bu
by Eliza Huber
Style
Here’s What Your Favorite Celebrities Wore During Memorial ...
by Eliza Huber
Style
7 Meghan Markle-Approved Fashion Brands That Are Also Affordable
by Eliza Huber
Style
Olsen Twin Sets The Bar For Social Distancing Style
From their pastel-colored lenses and bandanas circa 2000 to the black shapeless frocks they’re known for today, the Olsen twins have been our style icons
by Eliza Huber
Style
Meghan Markle’s Go-To Dress Is 50% Off At Nordstrom
We’ve learned every TikTok dance, box-dyed our hair pastel pink, and watched all 12 episodes of Normal People — twice. Next on our list of distractions
by Eliza Huber
Fashion
Villanelle Is A Carrie Bradshaw For Our Disillusioned Generation
Sex and the City’s Carrie Bradshaw walked so Killing Eve’s Villanelle could run. Sure, Bradshaw can be considered a predecessor to many of TV’s antih
by Cait Munro
Style
Meghan Markle Just Gave This ‘90s Jewelry Trend Her Stamp Of Appr...
Summer is almost here, and with it, comes all of our favorite kitschy, nostalgic accessory trends: seashell jewelry, fruit-shaped handbags, rhinestone-crus
by Eliza Huber
Style
Here’s What You Would’ve Seen On The Met Gala Red Carpet Last Night
by Eliza Huber
Celebrity Style
Meghan Markle’s Baseball Cap Marks The Beginning Of A New Era
It’s only been a month since Meghan Markle and Prince Harry swapped out their Sussex digs for a house in the Hollywood Hills, but they already look like
by Eliza Huber
Discover
R29 Stories & News
Watch
R29 Original Series & Films
Shop
R29's Most Wanted