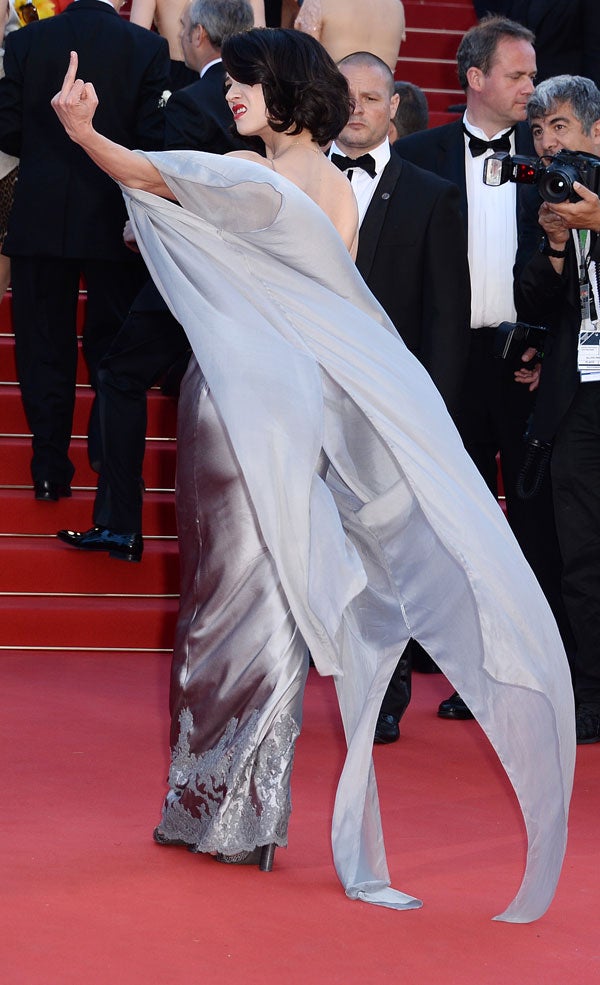 Maybe it's because we've spent one too many afternoons during college watching Suspiria, but there is something about those wacky Argentos. Asia, daughter of the cult horror director Dario, doesn't often find her way to English-speaking cinema, but whenever she does, she's totally bombastic on screen. (Her frightening, dramatic turn in French movie The Last Mistress was also pretty intense, as well.)
Argento has been going to Cannes for over 20 years, so she knows the lay of the land. Perhaps she was tired of celeb-hungry paps or maybe someone said something she didn't like, but Argento ended up flipping the bird on the red carpet. Wearing a whispery silver Ermanno Scervino gown and a gauzy wrap, with a voluminous bob and no-holds-barred red lipstick, the 37-year-old actress defiantly gave the middle finger.
Being an edgy troublemaker has kind of always been the actresses' M.O., and it's kind of her appeal. Who knows why she did it, but we've got to admit, if you are going to give the bird in public, do it was pizazz. (Or turn it into a dance. Whatever.) Either way, the resulting image is pretty evocative. But hey, we might be a little peeved if our dad went from making Phenomena to Dracula 3D, too.

Style
These Are The Best Emmys Looks Of All Time
by Eliza Huber
Style
These Celebs Won Best Dressed At The Emmys, Even Without The Red ...
by Eliza Huber
Fashion
Zendaya Won The Emmy Awards With Her Red Carpet Looks
Red carpet or no red carpet, Zendaya is taking her unofficial role as queen of only wearing showstopping looks very seriously. The Emmys might not be in pe
by Sarah Midkiff
Fashion
Regina King Changed Her Emmys Outfit To Make An Important Statement
Regina King used her spotlight at tonight’s Emmy Awards to pay tribute to Breonna Taylor and the Black Lives Matter movement. Rather than donning a
by Sarah Midkiff
Fashion
Tracee Ellis Ross Matches Her Mask To Her Dress At The Emmys
It’s official. Tracee Ellis Ross has proven that masks can be a focal accessory in any red carpet look. Never before has PPE looked so fashionable and re
by Sarah Midkiff
Style
Kamala Harris’ Timberlands-Pearls Combo Has Our Vote
On Tuesday, Senator Kamala Harris was in Nevada for a community roundtable, where she discussed the disproportionate impact that COVID-19 has had on Latino
by Eliza Huber
Style
Kate Middleton Rewore A Dress & Mask — & They Look Even Better To...
Apart from the whole Duchess thing, we like to think we’re not all that different from Kate Middleton. This was made easier when she was spotted on her w
by Eliza Huber
Style
Naomi Osaka Wore A Mask Honoring Tamir Rice Ahead Of US Open Win
Update: After wearing face masks with the names Breonna Taylor, Elijah McClain, Ahmaud Arbery, Trayvon Martin, George Floyd, and Philando Castile written o
by Eliza Huber
Style
Sofia Richie Wears The Biggest Trends Of The ‘00s In Kappa x Juic...
The phrase “that’s hot” might be the first thing that comes to mind upon viewing Sofia Richie’s latest campaign. Why? Created for the popular ‘00
by Eliza Huber
Style
Cate Blanchett Is Rewearing Red Carpet Looks For The Venice Film ...
As we approach the start of (a very different) award season, we can’t help but wonder about the sorts of statements that will be made on the red carpet.
by Eliza Huber
Style
Lady Gaga’s 9 Face Masks Won Her Best-Dressed At The VMAs
by Eliza Huber
Style
Gloria Steinem Gave Meghan Markle A Bracelet With A Special Message
Earlier this week, Meghan Markle had feminist icon Gloria Steinem over, in her backyard in Montecito, California. During the talk, which was recorded, the
by Eliza Huber
Discover
R29 Stories & News
Watch
R29 Original Series & Films
Shop
R29's Most Wanted