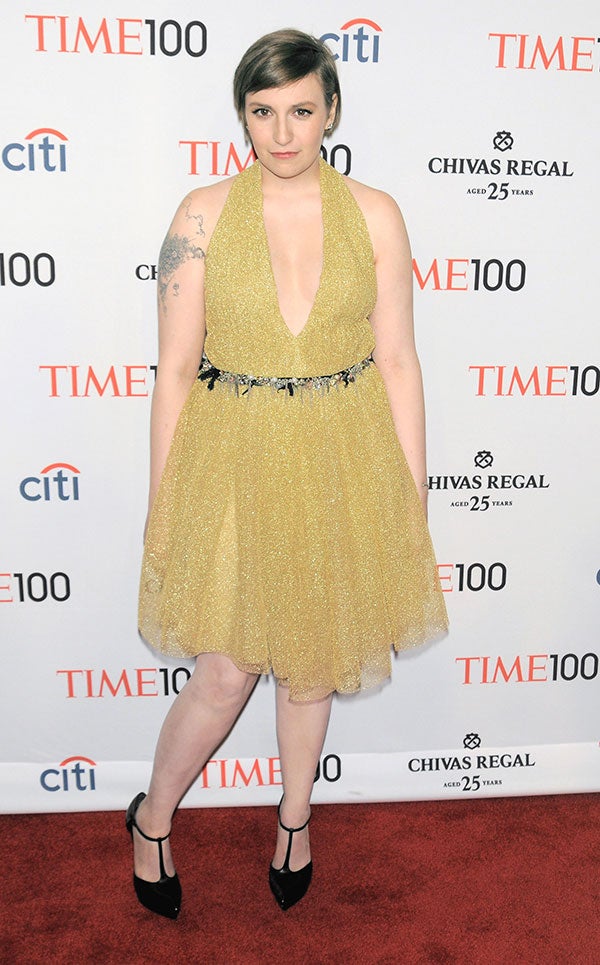 UPDATE: So, turns out we were in the minority for liking Lena Dunham's TIME 100 gala outfit the other day. But at least she was more poised than Hannah would've been, right? You gotta give her that. While expounding on her character's many, erm, charming mishaps, Dunham noted that if HH attended the same gala, “It would be a disaster. First, she would get drunk. Then she would say something culturally insensitive to an activist who fights for that culture. Then she would vomit. Then she would sleep with someone who she thought was Miguel, but it wasn’t.” (TIME)
Advertisement
Something to remember, folks. It could always be worse.
Lena Dunham has a complicated relationship with red carpet dressing — the whole perfectly-polished black tie thing isn't really her style, and that's part of her charm. But last night she went out on a limb for the TIME 100 Gala at Lincoln Center with a chic, extremely flattering Saint Laurent dress. Styled with sexy t-strap pumps and a spiked belt, the shape was perfect for her and the glittering chiffon was a great match for her sleeked-down pixie cut and Premier Gem for Forevermark diamond stud earrings.
This is proof of two things: First of all, Lena cleans up real good. Second, the new Saint Laurent ain't all bad. While some might've had a hard time seeing the sweetness of this Marilyn-goes-Vegas dress when paired with Slimane's sometimes heavy-handed grunge styling, on its own with just a touch of edgy accessories, it really shines. A win-win situation if we've ever seen one!

Style
Can We Start Calling This Gucci Handbag “The Harry” Yet?
For its latest star-studded campaign, Gucci gathered the likes of Diane Keaton, Dakota Johnson, Serena Williams, and, yes, frequent collaborator Harry Styl
by Eliza Huber
Celebrity Style
Sophie Turner’s Date Night PJs Are From The Brand Behind Instagra...
Rihanna isn’t the only one taking her pajamas out for a night on the town. On Tuesday night, Game of Thrones’ Sophie Turner wore a purple, check print
by Eliza Huber
Style
According To Bridgerton’s Nicola Coughlan, Kim Karda...
On Tuesday, Nicola Coughlan, aka Bridgerton’s Penelope Featherington, took to Twitter to let one of the show’s self-proclaimed fans in on a secret: “
by Eliza Huber
Advertisement
Style
Rihanna’s Latest Look Proves You Can Wear Lingerie Outside
As if to calm our Monday blues, Rihanna stepped out for dinner at Wally’s in Beverly Hills on Monday night wearing yet another top-tier ‘fit, this time
by Eliza Huber
Style
Anya Taylor-Joy Channeled Emma In This Two-Piece Version O...
This weekend, while out celebrating her 25th birthday in New York City, Emma star Anya Taylor-Joy channeled her on-screen persona by donning a puff-sleeved
by Eliza Huber
Style
Kate Middleton’s Jewelry At Prince Philip’s Funeral Honored The Q...
On Saturday, the Royal Family came together at St. George’s Chapel at Windsor Castle for the funeral of the Duke of Edinburgh, Prince Philip, who died on
by Eliza Huber
Style
According To Rihanna, Heeled Flip-Flops Are Making A Comeback
Over the past few weeks, Rihanna has convinced everyone they need a leather blazer, sheer pants, and bangs. Now it’s time to add high-heeled flip-flo
by Shannon Carlin
Style
Dua Lipa’s Latest Look Is An On-Trend Alternative To The Sw...
You want new fashion rules? Dua Lipa’s got ’em. One: thrift a vest. The “New Rules” singer debuted a new outfit on Instagram, makin
by Shannon Carlin
Style
Zoë Kravitz’s Cottagecore Dress Is From Instagram’s F...
And the cottagecore trend continues… On Monday, Zoë Kravitz shared a glimpse of her morning routine with her 6.1 million Instagram followers, which incl
by Eliza Huber
Style
Paloma Elsesser Brought Back Aaliyah’s Dress From The 2000 ...
This weekend, Paloma Elsesser got dressed up to celebrate the wedding of actress and producer Tiffany Lighty and skateboarder Nick Katz. For the outdoor ce
by Eliza Huber
Style
Phoebe Dynevor Traded Bridgerton Pastels For A Puff-Sleeve...
On Sunday, the buzziest names in TV and film gathered — some via Zoom, some in-person — at London’s Royal Albert Hall for the British Academy of
by Eliza Huber
Style
How Lady Gaga’s House Of Gucci Wedding Dress Compares To T...
Just when we thought the fashion in Ridley Scott’s upcoming film House of Gucci couldn’t get any better — think: Adam Driver as Gucci heir, Maurizio
by Eliza Huber
Advertisement
Advertisement
Discover
R29 Stories & News
Watch
R29 Original Series & Films
Shop
R29's Most Wanted