We're not scientists, but we're pretty sure that Heather Graham has unlocked the secret to the fountain of youth. Whether she's playing Austin Powers' infamous Felicity Shagwell, opposite Ed Helms in The Hangover, or acting as the sultry Meredith Crown in her new film At Any Price, it seems the star is literally reverse-aging. And while she's probably best known for her sexy supporting roles — and her rock-hard bod — Graham's also got serious acting chops.
We were lucky enough to discover this first hand when we sat down to chat with her at the Crosby Street Hotel here in her adopted hometown. The actress was kind enough to let us in on some of her diet and fitness secrets (hint: lots of yoga!), and she also cracked jokes about everything from crushing on her costar Zac Efron, to marveling at the fancy new trailers on The Hangover III set. Read on to steal some of her best tips and recipes, and learn what it was like spending two months on a farm with our favorite young heartthrob.
Advertisement
What was it like filming out in Illinois, in the middle of nowhere with just the cast? "It was fun. It’s great to shoot in the actual place that the movie is supposed to be taking place. You know, sometimes you’ll be shooting in Romania when you’re supposed to be in a mining town in America. So, it’s cool that we were really in the cornfields where our story was taking place. We got to do research and I got to go to this grain elevator and see what it’s like to work at a grain elevator. It was beautiful, but hard to find good restaurants!"

What did you guys find to do for fun?
"There were not a lot of options. Basically, we would go out to dinner and sometimes people would have parties in their hotel rooms. Little parties. I mean, we weren’t doing that much, but one night we all drove to Chicago and went to a club. That was the night that this crazy Russian guy gave Zac a bottle of champagne that was worth $100,000." 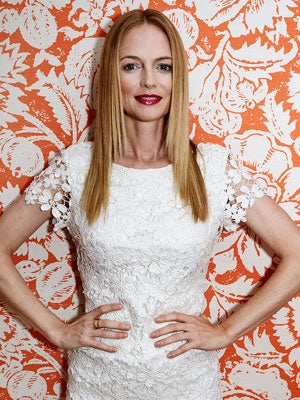 Naturally. Of course that would happen to him. Your character in the film is a little morally ambiguous — how did you find a connection with her?
"You just put yourself in the situation and say, 'If I was this person in this situation...' I mean, as the actor you really have to be on your character’s side."

Was it hard to not form judgement on her?
"The story’s told more from the points of view of Henry and Dean [Dennis Quaid and Zac Efron's characters], but I think if the story were told from Meredith’s point of view, you could understand that they were the villains and that she was the hero. So, that’s the way I saw it as an actress. And also, I just thought, it’s so fun to get to work with the both of them, and I feel like, what woman wouldn’t be so excited? You know, these two hot men, to do scenes with them. I mean, if that was your life, that wouldn’t suck."

Advertisement
You have a particularly steamy scene with Zac. What was that like behind-the-scenes?
"Well, it was kind of funny because Ramin [Bahrani, the director] and Zac both came up to me and they were like, 'You know, we’ve never done a sex scene before so we’re kind of nervous,' and I was kind of laughing because I thought suddenly now I'm going to be like, 'Let me tell you about sex scenes' because I’ve done them before. But I just said, 'Don’t be nervous, it’s gonna be good.' You know, whatever. It was more just getting relaxed and feeling comfortable with each other."

How was it working with Dennis Quaid? Had you worked with him before?
"I might have met him briefly, but I was a huge fan and I’ve always loved his work. And, of course, I had a crush on him. He’s so cute. I mean, even though I’m an actress, I still get starstruck at actors, and I’m just like...“Ah!” Even now, I mean I know him and I work with him, but I’m excited, you know? All my girlfriends came to this party last night and they wanted to talk to him and they wanted to talk to Zac. It’s funny."

You’ve done this film with Zac, and you just wrapped a film with Selena Gomez — what is it like working with this younger Hollywood generation? Do you have any advice for them?
"I’m so impressed by them. It’s hard to look at them and think that they're only in their early 20s. I got to know Zac better than I got to know Selena, but both of them just seem so mature and business-like. I don’t think that at that age I could have been this huge corporation. But I guess, not that they need advice, you’ve gotta just have a balance between your work and your personal life. It’s fun to meet creative people at all different levels of their career."
Advertisement

You have amazing skin. Do you have any go-to products you rely on?
"I like moisturizing a lot — my whole body, my face. I use this inexpensive Body Shop Nourishing Night Cream, and sometimes I’ll use Crème de la Mer."
What about your diet and fitness? You’re traveling all the time, how do you keep up with your regimen?
"I’ve become one of those annoying people who’s like, 'I’m not gonna eat white flour and I’m not gonna eat sugar.' I do eat sugar sometimes, but as a broad rule, I try to just eat no sugar basically, and I have to say I feel a lot better. And I will sometimes eat things with white flour, but I try to avoid white flour."

Do you have any token dishes that you cook?
"I’m kind of slightly hypocritical because one of the main things I make is a beer-can chicken. It’s got a paste on it that’s made of salt, pepper, and brown sugar. But that’s really one of the best things I’m making right now. I’m also making sweet potato fries, but I make baked wedge fries so they’re healthier. I make a really good salad with kale, chopped raw brussel sprouts, and toasted almonds. Everyone’s into kale. It does make you feel healthy."

What about exercise? Are you into SoulCycle?
"I’m obsessed with yoga. For fun, I would go on a yoga retreat and do four hours of yoga a day. And then I do pilates. I also like going out dancing."

You just joined the cast of Californication. Is there anything you can tell us about your role?
"Yes. I can tell you that I play...I dated David [Duchovny's character, Hank Moody] a while ago. Basically, I had his child and never told him, and the kid wants a relationships with his dad. So he shows up out of the blue and suddenly we all get into each others’ lives again."

Your next film to be released is The Hangover III. Do you have any crazy stories from the set that you can share?
"Our trailers were much nicer than on Hangover I. Everyone was like, 'There’s so much more money on this set now!' But [the cast is] just always improvising fun stuff. You just never know what they’re going to do. They keep you on your toes."

You're technically bi-coastal now. Can you solve the great New York vs. Los Angeles debate?
"I feel like New York has people doing many different kinds of jobs, whereas L.A. is a little bit single-focused with people who are mainly working in film or television. It’s fun to come to New York. I mean, to go out at night in New York is just the most exciting thing, because you can go on adventures and meet people, and you’re in the street and you just take a cab. It’s got this fun energy where you never know where you can go or you can go into this amazing place you never knew was there. It’s so exciting. I think L.A. is good if you want to just relax. You know, it’s less expensive, you can get a backyard, there’s more space. You can go hiking. Everyone has a car. It’s nice to have both. But I’m starting to feel more like a New Yorker, even though I spend more time in L.A."
29Rooms
29Rooms Is Back; Here’s How To Attend Safely
Over the past year and a half, we’ve missed many opportunities to attend concerts, festivals, parties, and hangs. And although restrictions have loosened
by R29 Brand Experie...
Somos Latinx
Dear Miya Ponsetto, You Can Be Latinx & Still Be A Karen
Miya Ponsetto, the white woman dubbed as “SoHo Karen” on social media, was forcibly arrested in California yesterday. Her arrest comes after sh
by Jasely Molina
Food & Drinks
Is A Bagel Really A Bagel If It Isn’t In NYC?
by Elizabeth Buxton
Advertisement
New York
We Dig This NYC Dim Sum
by Camille Coklow
Beauty
The 17 Most Epic NYC Massages
by Kayla Jacobs
Movies
11 Movies Perfect For A Glorious Snow Day
by Vanessa Golembewski
New York
You HAVE To Try The Avocado Toast At These NYC Restaurants
by Elizabeth Buxton
New York
The Absolute Best Spots To Slurp Ramen In NYC
by Zoe Bain
New York
The NYC Rooftops You Need To Hit This Summer
by Elizabeth Buxton
Beauty
The Best Cheap Haircuts In New York City
Choppa style, for cheap.
by Liesa Goins
New York
The Indie Bride-To-Be’s Guide To Dress Shopping In NYC
by Ashley Castanos
New York
Is This Really What The NYPD Thinks About Rape?
NYPD captain Peter Rose has angered rape advocates after saying “acquaintance rape” cases are not as serious as rapes committed by strangers.DN
by Shannon Carlin
Advertisement
Advertisement
Discover
R29 Stories & News
Watch
R29 Original Series & Films
Shop
R29's Most Wanted