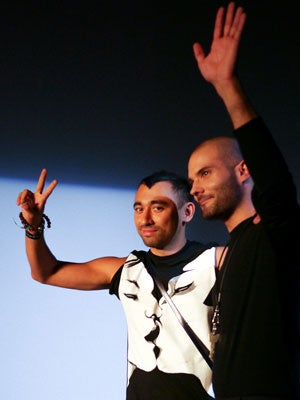 UPDATE: Looks like the Post got it right! Nicola Formichetti is indeed headed to Diesel as Artistic Director. Founder Renzo Rosso made the following statement in a press release today: “I finally met somebody as crazy as I am. Nicola shares my vision and I find it incredibly inspiring to work with him: two creative planets are colliding to generate fresh, mad, insane ideas. With his help, I want to break more rules and bring the real Diesel to a new generation.”

UDATE: After yesterday's announcement that the designer is leaving Mugler, rumors are blooming today that Nicola Formichetti is headed to Diesel.
The New York Post
thinks he'll assume the position of Creative Director after palling around with founder Renzo Rosso during Paris Fashion Week, while
WWD
is of the (probably well-informed) opinion that the pair are working on a major, but temporary, collaboration. And don't forget he had previously announced plans to launch an eponymous label, Formichetti, sometime in mid-2013 — leading many to speculate that Rosso is backing the project.

Advertisement
Two years ago, Nicola Formichetti sent Lady Gaga strutting down the runway in a white Mugler dress with down-to-her-butt ponytails and a lit, smoking cigarette underneath a saucer-like hat. It was a runway extravaganza, even if the futuristic, cerulean, and cream collection took second place. Formichetti used his relationship with Gaga to propel Mugler into a new stratosphere — one where the line between Formichetti's projects (and his penchant for muses like Gaga, Zombie Boy, and Nomi Ruiz) and Mugler's aesthetic were blurred. Mugler took on the gritty, hyper-stylized, party-kid aesthetic that made Formichetti one of the most sought-after stylists in the world.
It appears, however, that the relationship has ended. Today, Mugler announced that it was splitting with Formichetti and is gearing up to reveal a new strategic plan that, according to WWD, "builds on its highly successful legacy in fragrance and its new momentum in fashion.” A new momentum, of course, that Formichetti helped ignite. Fortunately, it sounds like the move is amicable. Joel Palix of Clarins Group said, "With his talent for communication and understanding modern imagery and design, Nicola has been instrumental in attracting a newaudience which is undeniably crucial for the future strategy of the house. He will be a historical part of the Mugler legacy and known as the force that catapulted us forward.” A lovely sentiment, but perhaps this means the end of Mugler runway shows, as it sounds like the brand is gearing up to focus solely on its luxury fragrance.
Don't worry about Formichetti: The creative director of the Haus of Gaga has plenty on his plate. He'll certainly be back shortly with something endlessly creative, bloggable, and set to send fashion into a tizzy.

Style
Marc Jacobs On Self-Expression And Being “Perfectly Imperfect”
“It’s always been hard to tell my story because my story always changes, and it’s always about really honoring all of these impulses rather than havi
by Irina Grechko
Style
Chloe x Halle’s Fendi Campaign Was Shot In Their Backyard
Sisters-turned-stage-partners Chloe and Halle Bailey have stayed busy during quarantine. Since the pandemic forced most of us indoors, the Grammy-nominated
by Eliza Huber
Style
These Artful Bandanas Support Black Female Entrepreneurs
Even before the pandemic sent us scrambling to find face coverings, bandanas were destined for a comeback. During Milan Fashion Week, silk versions of the
by Eliza Huber
Style
How NIENMORE Is Helping Women In Juárez, One Tie-Dye Dress At A Time
In the Mexican city of Juárez — located south of El Paso, Texas — violence is rampant. Nearly 1,500 homicides occurred in 2019, and over 64 occurred i
by Eliza Huber
Style
From Cloud Face Masks To Gender-Fluid Clothing, Phlemuns Is Break...
“I exist in the gray areas,” James Flemons, the designer and founder of L.A.-based unisex label Phlemuns, says about being Black, queer, and sexually-f
by Eliza Huber
Style
Christopher John Rogers, Staud, & More Nominated For CFDA’s Emerg...
On Monday, the Council of Fashion Designers of America (CFDA) announced the nominees for the 2020 Fashion Awards. And while most of the names are (unsurpri
by Eliza Huber
Designers
Misha Nonoo Reimagined This Meghan Markle-Approved Shirt
Few white shirts have gotten as much recognition as the one Meghan Markle wore for her first public appearance with Prince Harry in 2017. Now, the designer
by Irina Grechko
Style
Female Designers Are Taking Gender Out Of Streetwear
Streetwear, a clothing style with ties to skate, surf, and hip-hop cultures from the ‘80s and ‘90s, has traditionally been a market that caters almost
by Eliza Huber
Designers
In The Pandemic, Sally LaPointe Rebranded — & Handwrote Thank-You...
Since the pandemic began, the fashion industry has stalled. Collections have been delayed as factories closed, design teams have had to work on upcoming li
by Irina Grechko
Style
Did Zero Waste Daniel Predict The Death Of Fashion As We Know It?
Like many aspiring fashion designers, Daniel Silverstein found inspiration for what would become his life’s work in the classroom. During his senior year
by Eliza Huber
Style
Fenty’s Latest Drop Has ‘00s Going-Out Tops, Belly Chains & Anklets
At the beginning of June, Rihanna launched the first of three Fenty drops for the LVMH-backed luxury brand’s 6-20 collection. The series, according to a
by Eliza Huber
Designers
For Lebanese Fashion Designers, Couture Must Go On
Following the COVID-19 outbreak, fashion has been hit hard. From factories forcing to close due to stay-at-home orders and brands shutting their doors for
by Allyson Portee
Discover
R29 Stories & News
Watch
R29 Original Series & Films
Shop
R29's Most Wanted